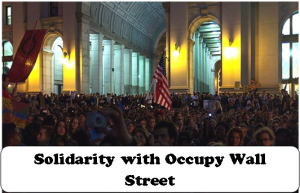 On “The Last Word with Lawrence O’Donnell” of MSNBC (A MoxNews video), the newscaster explain how Fox never put this interview on air, even though an eloquent speaker, named Jesse, explained it all perfectly. Also, a class action law suit was filed yesterday for the entrapment of protesters at Brooklyn Bridge this past Saturday. Earlier this week, many protesters dressed up as zombies when they marched passed the New York Stock Exchange. In addition, Ben Bernanke (a Chairman of the Board of Governors of the Federal Reserve System) spoke about the protesters, stating that generally, “people are quite unhappy with the state economy…and they are dissatisfied with policy response here in Washington” He admits that he cannot blame the people for speaking out. Furthermore, the Transit Workers’ Union Local 100 of New York is in solidarity with “Occupy Wall Street” and will be joining the protest.

Additionally, “The Place for Politics” from MSNBC covers the newest on how “Occupy Wall Street” expects one of the largest marches today with several unions, including the United Federation of Teachers & The Transit Workers’ Union Local 100 of New York.
http://youtu.be/lYthRwBPfd8