Conflicts with the Cops on Day 19 (Occupy Wall Street) 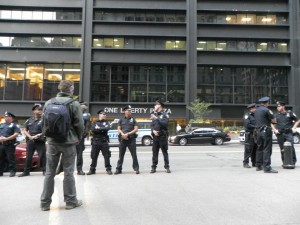 Last night, various unions, school students and employees, & health care workers joined the Occupy Wall Street Protesters. At least 20 or more protesters were arrested, along with some reporters. They were kettled, clubbed, and pepper-sprayed. The massive protest started out in a very peaceful and even celebratory manner. However, when a group decided to march on Wall Street and engage in civil disobedience, the chaos occurred. (Frankly, I think the police got really nervous from the huge crowd.) Also, an enormous police presence remained in other parts of NYC, where the atmosphere remained calm. Countdown with Keith Olbermann reports:

Here is an aerial view from yesterday’s massive march: