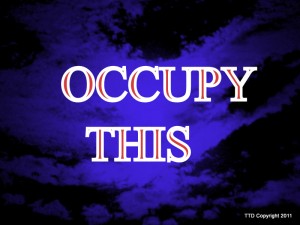 What and who is behind Zuccotti Park? A legal battle to evict Occupy Wall Street protesters, but can they?
Written By, Trinity
Talk about the game being ‘rigged’, wait until you get a load of what and who is behind Zuccotti Park. Seems the “system” is now imploding on itself, meaning, no one {party} actually has the right to evict the Occupy Protesters. Was this planned from the start, and if so, by whom?
Let’s take a look at the facts.
• Zuccotti Park, now home to Occupy Wall Street Protesters since September 17, 2011, is a privately owned slice of real-estate, but operates as a public space that must be open 24-hours-a-day under an agreement with the city. Brookfield Office Properties owns Zuccotti Park.
• NYC’s Mayor Michael Bloomberg’s girlfriend, Diana Taylor, is on Brookfield’s board of directors.
• DIANA L. TAYLOR: A resident of New York, New York, U.S.A, and Diana L. Taylor is a managing director of Wolfensohn & Co. She served from June 2003 to March 2007 as the Superintendent of Banks for the State of New York. Ms. Taylor joined New York Governor Pataki’s staff in 1996, where she has served in several capacities, including as Deputy Secretary for Finance and Housing. Prior thereto she also served as Chief Financial Officer for the Long Island Power Authority, an investment banker with Smith Barney and Lehman Brothers and as a founding partner of M. R. Beal & Company. Ms. Taylor serves as a director of the New York Women’s Foundation, the Mailman School of Public Health at Columbia University and ACCION International. She is a member of the Council on Foreign Relations. (From Brookfield Properties 2008 Board Meeting BROOKFIELD PROPERTIES CORPORATION)

• Zuccotti Park, originally named Liberty Plaza, was destroyed during the World Trade Center collapse on Sept. 11, 2001 and later reopened in 2006. At that time, the park was renamed after John Zuccotti, chairman of Brookfield’s board of directors.
• The Wall Street Journal Reports: “Virtually all bonus plazas {like Zuccotti Park} are required to be open 24 hours a day, barring a safety issue. And police must be invited in by the owner, just as a homeowner would have to.”
• “In the 40 years since John E. Zuccotti joined city government as a part-time, $15,000-a-year member of the City Planning Commission, he has been chairman of the commission, first deputy mayor, chairman of the Real Estate Board of New York and the United States chairman of the global real estate giant Brookfield Properties, which owns, among other buildings, the World Financial Center in Lower Manhattan.”

The New York Times interviewed John Zuccotti and he had this to say: “According to what I read, the nature of the protest has been a little vague,” said Mr. Zuccotti, who returned to New work on Tuesday after traveling in Europe. Mr. Zuccotti said, “My guess is that we basically look to the police leadership and mayor to decide what to do.”
“If you go there, you can’t tell the protesters from the tourists,” he added. “It has a kind of festive atmosphere.”

According to Manhattan Local News tabloid DNAinfo.com, Commissioner Kelley made an announcement in October stating:
“The park, where demonstrators have been encamped for three weeks, is privately owned but operates as a public space that must be open 24-hours-a-day under an agreement with the city.
“Right now, they are there and the owners of that plaza don’t have the legal right to eject them,” Kelly said.

So let’s wrap up part ONE.

Occupy Wall Street chose the right location, the right timing, and the right to basically live at Zuccotti Park without fear of eviction. Was this by chance, or was this maneuver carefully planned by the movement itself?
Could it be that The Powers That Be are now rendered powerless via their own legal monster that they themselves created?
Occupy Wall Street protesters currently live in not only one of the priciest pieces of real estate in the entire country, they live there for FREE.
What’s even more ironic, it seems that no amount of money can remove them either.

And they said Occupiers were uneducated & unorganized.

To see more stories like this please visit www.thetruthdenied.com