Unfortunately, some police across the states continue to use excessive force against the protesters, especially in Oakland, California just a few days ago. They used tear gas, flash bombs and rubber bullets, injuring a former US Marine and others. Thus, many more military are standing up against the unnecessary force and pressure of certain police. And in Denver, rubber bullets and chemical weapons were shot into the crowd just yesterday. Excessive force continued in San Francisco, San Diego, Nashville, Birmingham, Raleigh, Cleveland, Boston, Minnesota, and other cities of our American states. Now, the movements in Colorado and New York have to prepare for snowstorms, as a large winter storm approached into certain areas just recently. RT News Reports: 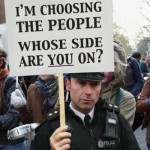 HOWEVER, THERE ARE POLICE THAT ARE IN SOLIDARITY WITH THE PROTESTERS!
Occupy Police