Bank of America stock price pushes under $7 a share. What does this mean to the average citizen?

First of all you need to keep in mind that Bank of America traded above $50 in 2008.

On August 22, 2011, Business Insider reported that Bank of America needs to raise a staggering 50 BILLION dollars to stay afloat. The Bank is reporting that they are solvent and not experiencing any problems. The truth is, they are on a stock death spiral, and where do they go from here?

FDIC Reports Bank of America on its Failed Banks List October 28, 2011 * Note: It has come to our attention in the past couple of hours that all branches of failed Bank Of America locations have been removed from this website.  We should have taken a screen shot!
http://www.fdic.gov/bank/individual/failed/banklist.html

Bank of America is closing its Mortgage Unit reported October 3, 2011

But…. According to Business Insider and several other stock adviser companies,
“Sources said price was a major factor with Fortress insisting that B of A “pay them to take the thing off their hands” said one adviser.
In other words, no one wants to buy B of A’s Mortgage Unit.

To add to the sham, it seems that Bank of America is Fortress Investment Group’s ninth largest institutional, this according to data compiled by Bloomberg. Talk about a domino effect?

Congressional Research Service Confirms that Big Banks Borrowed cash for extremely low interest rates, then turned around and lent it back to the Fed’s at higher rates?  See the story here:

Are you getting dizzy yet?

For Bank of America, Countrywide Bankruptcy Is Still an Option, but will they pull the trigger?

And what are Bank of America Customers saying about this? 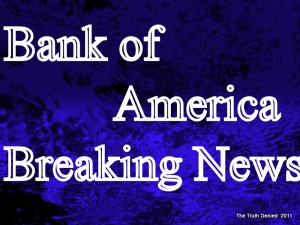 iral. As soon as they announced the decision to charge savers a $5 fee on Thursday, their website was down by the next morning due to all the traffic of people trying to close their accounts. On Saturday and Sunday, their website was up very intermittently”
As of October 31, 2011, NYSE reports
Bank of America’s stock price down 7.06 -0.29 -3.95%

Let’s keep in mind that November 5, 2011 is “National close accounts associated with the Big 5 Banks.”

www.thetruthdenied.com will report on the results associated with November 5, 2011

In the meantime, hold on to your head, things are looking to get shakier in the financial doom and gloom.