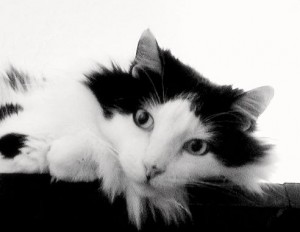 This story has been researched and brought to you by Roxy Lopez.

Firstly, read my personal story, followed by a number of helpful resources listed in this article, including organic and limited diet foods, as well as information on the proven medical side affects of GMO foods. You may wish to bookmark this page, as you will find it helpful  now, and certainly in the very near future, as GMO foods are in most pet  foods. This article also covers the dangers of GMO’s  for humans, and a plethora of websites that can help guide you in fighting back against GMO’s and lists reasons why you should not back down when it comes to this subject matter.

UPDATE: Note to our readers. Harley passed away on December 25th, 2013. We tried EVERYTHING under the sun for our sweet kitty. May he rest in peace forever, he was and still is a great loss. Our family, months later, is still grieving.

In December of 2011, our  kitty Harley began vomiting and having  diarrhea uncontrollably. Up until then, he  was fine, happy and seemingly healthy right up until the incident, so this came to a big surprise to us. We did not wait for another day to pass, and took Harley into the emergency clinic. Test results showed some over production of white cells and bacteria in the intestines, and he was prescribed antibiotics and Probiotics. I was shocked that the vet also reported that he had lost 4 lbs. My husband and I said “What, when , how?”.  The vet really had no explanation. And so the journey began.

Harley , our kitty, continued to have vomiting, and the series of tests to follow became not only maddening, expensive,  as well as time consuming. Maddening because the Vet could not help Harley unless a  diagnoses could be made, and meanwhile Harley was loosing weight quickly!  Time consuming because he would howl in pain at different times of the day and night, so we would stop whatever we were doing to calm him and comfort him . Maddening because we could not handle knowing we were powerless to help him, and we observed  him deteriorating rather  quickly.  The Vet ran blood panels and tested Harley’s  liver, kidneys, heart, they did x-rays,  even tested for thyroid disease and cancer but  all the tests came back normal. Believe me there was nothing normal about his condition. Meanwhile it was getting harder and harder to watch this once  healthy , sweet, active and loving kitty , our kid, suffering  like this, and 3 weeks into this we still had no diagnosis. Finally we went to a specialist, more tests, blood work, urinalysis, fecal analysis, and and ultrasound of his lungs , stomach and intestinal track.  This 4 hour Vet visit would now reveal  the  lower intestine  was inflamed, this condition is known as  IBD. (Intestinal Bowel Disorder).To top it off, my husband was called away from home and I was left to cover all the night shifts with Harley, which led to my own personal emotional wall due to  exhaustion

Now I won’t bore you further with the details of the past  8 weeks, but I will say this, just like people, all animals respond differently to treatment.  It has been a roller coaster ride, and Harley requires  a lot attention, and the good news is this:  He is getting better all the time, and is practically back to his old personality and energy! Far from healthy, but we are finally  moving in the right direction.

*NOTE* Harley was prescribed a diet called LIMITED INGREDIENT.  He was prescribed Limited Ingredient  Venison, Rabbit or Duck. What do all three of these (3) animals have in common?  You got it! NONE of these animals eat GMO Grains ,grass, soy or rice.  After careful investigation,  believe that Harley’s issues were caused by GMO foods. After carefully researching GMO’s and pets, I found that my instincts are correct. Statistics are that in the past few years, IBD has gone up in pets 40%. My own specialist stated that 60% of the patients that walk in her door are IBD.  Is this a coincidence????

Listen, IBD may sound like something minor, when in fact, it  is  lethal if it goes  untreated, especially for your pets.Remember, it is NOT your fault! So please relieve yourselves of the guilt when your pet does get ill!

I have the proof to support my  statements, so please take a look at my resources and facts.

The following links and excerpts from websites will aid you in this discovery with any similar illnesses that your pet may be experiencing. Please take the time to explore the remainder of this article, and save your pets life.

Let’s talk about the CAUSE of IBD:

“Inflammatory Bowel Disease is a chronic condition that affects the function of stomach and or intestines. Abnormally large numbers of blood cells invade the bowel which interferes with digestion and absorption of food. The intestines are unable to absorb nutrients from the diet; therefore the food eaten is not able to be utilized by the body. When these cells invade the stomach and initial part of the intestine, vomiting is the main sign. Loose stool and diarrhea are the predominant signs when these cells invade the lower small intestine. Involvement of the colon results in a mucous diarrhea often flecked with bright red blood. Any or the entire intestinal tract from the stomach and small intestine to the colon may be involved. IBD is the leading cause of chronic vomiting, diarrhea and weight loss in cats and dogs. Middle aged and older cats are most prone.

“The underlying cause of this disease is not known. Immune system defects, food allergies and stress have been incriminated but have not been confirmed. Feline Infectious Peritonitis (FIP) has been associated with certain cases”.

I personally had already  suspected that IBD  would have to be stress related, and in part it is exactly that, as Harley is a rescue that we adopted 7 years ago and he took a long time to trust us. Taking up a year of residence at the rescue caused him to be stressed as well as afraid of humans. We have since overcome trust issues and he has been the coolest cat ever since.   The second factor for IBD is really my main concern, something known as food allergies.  Now that stumped me, because Harley is an organic eater, and he has never shown signs of food allergies, other than drippy eyes once in a while. But cats are smart furry creatures, and if something makes them sick (vomit, etc.) they generally develop a dislike for that type of food and they tend to just stop eating it all together. What caused Harley’s “food allergies”?

I dug deeper, and found studies to support my theories. GMO foods were responsible for not only Irritable Bowel Disorder, but a plethora of other diseases ranging from Crones, to intestinal cancer.

We have been working with Dr. Wil Spencer of http://bodyelectrician.com/natures-chelation We suggest you contact him if any of your animals (domestic or FARM) are showing symptoms, because the first symptoms lead to death pretty quickly! You can save your animals life NOW!

Procter and Gamble own Iams and Eukanuba, and Mars owns Kal Kan, Mealtime, Pedigree, Walthams, Sheba, and Nutro.  For a host of reasons I prefer to rely on alternative pet food companies that are not part of the food and drug industry complex, and that are making a concerted effort to produce wholesome pet foods that are not based primarily on human food and beverage industry byproducts and on ingredients condemned for human consumption; and that contain GM free (not genetically engineered), and ideally organically certified food ingredients, and produce from farmed animals raised humanely. It should be noted that I have no financial ties with any pet food company. 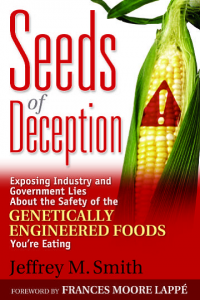 From the book   “Seeds of Deception “

“What the biotech industry doesn’t want you to know.

The Wisdom of Animals

RESOURCES FOR THE GENERAL PUBLIC (from the book “Seeds of Deception” by Jeffrey M. Smith)

The Bioscience Resource Project – The only free public-interest science media for food and agriculture. Provides high-quality and original news, research and analysis of topics where the science of food and agriculture impact on human health and the environment. Especially relevant are their critical scientific analyses of GMO risks.

GM Watch – A news and research service founded in Norfolk, UK in the spring of 1998 to report on the growing concerns about genetic engineering.

GE Food Alert – A coalition of seven organizations united in their commitment to testing and labeling genetically engineered food.

Friends of the Earth GMO campaign pages – The U.S. voice of an influential, international network of grassroots groups in 70 countries. Friends of the Earth has for decades been at the forefront of high-profile efforts to create a more healthy, just world.

Genetic Engineering Action Network – A diverse network of grassroots activists, national and community non-governmental organizations (NGOs), farmer and farm advocacy groups, academics and scientists who have come together to work on the myriad of issues surrounding biotechnology.

The campaign to label genetically modified foods – Mission statement: To create a national grassroots consumer campaign for the purpose of lobbying Congress and the President to pass legislation that will require the labeling of genetically engineered foods in the United States

Say No to GMOs! – This site offers extensive information on the complex and controversial issue of genetic engineering.

Organic Trade Association – The OTA is the membership-based business association for the organic industry in North America. The OTA’s mission is to encourage global sustainability through promoting and protecting the growth of diverse organic trade.

Gene Traders – A new and comprehensive collection of research and essays on biotechnology.

Roxy Lopez thanks all of you who prayed for Harley during some very rough times. Harley is slowly improving , one day at a time we will report on what is working for him  every month for those of you who have been inquiring about him. Mahalo for your blessings.

We have been working with Dr. Wil Spencer of  http://bodyelectrician.com/natures-chelation We suggest you contact him if any of your animals (domestic or FARM) are showing symptoms, because the first symptoms lead to death pretty quickly! You can save your animals life NOW!

Please note! The Truth Denied and our team do not collect, share, or receive any profits or money from Dr. Wil Spencer . This article has been presented as a means and a way to use what we used for successful health with our beloved kid Harley! It is not intended to be an advertisement of any kind. When we recommend books and other websites, it is all done voluntarily!