Sean David Morton  is the author of BLACK SERAPH, THE DARK PROPHET (which

predicted  the chaos in the Middle East) and the mind shattering

smash bestselling true story SANDS OF TIME, a behind the scenes

true story about government Black Ops and US development of super

In the early eighties, I had a fascination with UFO’s and finally was invited to my first MUFON meeting. I had heard of Sean Morton through the grapevine so I decided to check it out!  The lecture was about Area-51, and though I knew very little about the base, there was one thing for certain: if it really did exist out there in the Nevada desert, I wanted to SEE it!

As it turns out, Sean covered every inch of the Area-51 subject matter in his lecture, including photos and a slide show!  I wanted to meet this guy, and I wanted a map to the Groom Lake mystery base. Needless to say, Sean approached us after the meeting and we ended up at a coffee shop talking about the base and UFO’s for hours. By the end of the night, we had the MAP to Area-51, thanks to Sean Morton! If my memory serves me correct, he scribbled the directions on a napkin. Less than a week later, I and a couple of friends visited the base and it changed our lives forever!

Sean and I have been friends ever since 1987, and we have had the opportunity to witness so much more in the world since those days of old! Listen to the interview to hear ‘the rest of the story!’.

WARNING: The show you are about to listen to demands all of your attention!

Sean tirelessly continues his quest to bring the light of world
media attention to the paranormal, the prophetic and to the
Ascension of Mankind. 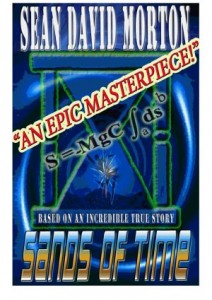 An Epic story spanning over forty years in the life of Dr. Ted Humphrey and his involvement with Area 51, The Dulce Mesa Wars, The Montauk Project, Black ops, The shadow Government, and his meteoric rise to become head of an all powerful global organization engaged in a desperate and above top secret race against time to save our world. Beginning at the age of 17 when his father, a brilliant scientist with a mysterious past, disappears. Ted makes it his life’s quest to discover his father’s fate. This leads to him being drafted into a series of high-level government projects working on the most valuable piece of research equipment ever built…a machine that can move objects through SPACE and TIME. As Time Technology is developed, Ted is inexorably drawn into a world-wide web of mystery, intrigue, disinformation and power. He is taken inside an elite, clandestine group of men dedicated to hiding the truth from everyone outside a small tight-knit cabal of politicians, scientists and spooks; that forces from beyond the stars could lead to Earth’s destruction at some point after the galactic alignments of 2012. In a world where one mistake could be your last, Ted gets guidance from people further down and outside of the time stream, never knowing who he can trust, while still seeking to solve his father’s disappearance. 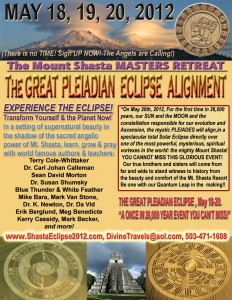 DON’T MISS THIS EVENT! The eclipse of this nature only happens every 26 thousand years! 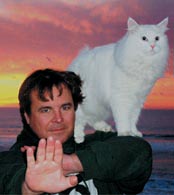