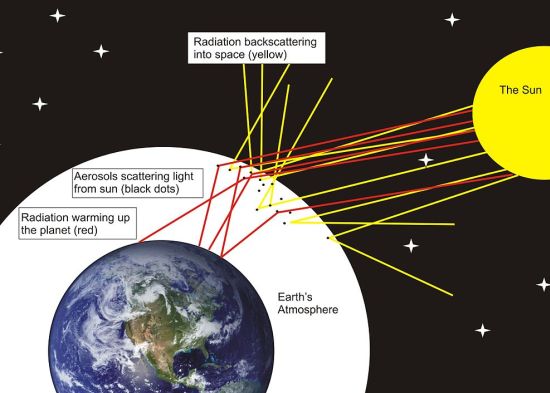 People suspect there is something going on in the sky. Some governments it appears  have already put  geo-engineering programs into practice. The Stratospheric sulfate aerosols spraying creates a reflective layer in the sky. People’s visual observation of these reflective vapors or chemtrails is what usually alerts them that spraying has occurred. People tend to think  if they can’t see see vapor trails and only blue sky above their heads, must mean no spraying has occurred. But is that really true?

“The Tyndall effect, also known as Tyndall scattering, is light scattering by particles in a colloid or particles in a fine suspension. It is named after the 19th century physicist John Tyndall. It is similar to the Rayleigh scattering, in that the intensity of the scattered light depends on the fourth power of the frequency, so blue light is scattered much more strongly than red light.

Under the Tyndall effect, the longer-wavelength light is more transmitted while the shorter-wavelength light is more reflected via scattering. The Tyndall effect is seen when light-scattering particulate-matter is dispersed in an otherwise light-transmitting medium, when the cross-section of an individual particulate is the range of roughly between 40 and 900 nanometers, i.e., somewhat below or near the wavelength of visible light (400–750 nanometers).

The Tyndall effect is commercially exploited to determine the size and density of particles in aerosols and other colloidal matter:

According to the above article, learning the Tyndall Effect may allow us to learn the size and density of aerosols and other particulate matter in our sky. So just how do we observe the Tyndall Effect and the chemtrail vapors that may not be visible on certain days to the naked eye?  The answer to our question is in observing the color of the sky.

The information contained in the links below gives us some ideas of how the coloration of the sky is capable of change and what those changes can mean.

http://www.islandnet.com/~see/weather/almanac/arc2008/alm08oct.htm
When the sun is directly overhead, the amount of atmosphere the solar beam must traverse is at a relative minimum for the day. But as the sun approaches the horizon, that optical air mass increases dramatically, reaching thirty-eight times longer when the sun is on the horizon than at its zenith. With the sun near the horizon, the greater optical depth has scattered away nearly all the blue coloration in the original sunlight, and the sun appears to be from yellow to red in color, as does the surrounding sky. This high level of scattering gives us the fiery reddish sunrise and sunset skies, which can be further enhanced when some of that light reflects off cloud surfaces. In fact, we can generalize a rule for the change in color with optical depth: The more air a light beam must penetrate, the redder it gets. The noon summer sun traverses less atmosphere than the noon winter sun, and is therefore brighter. In the higher latitudes where or when there is a winter noon sun, it often seen as a reddish disk just above the horizon.

Water vapor and other gas molecules may make up a small fraction of the atmospheric gases, but they can have a significant influence on sky color. Water vapour molecules are smaller than the nitrogen and oxygen molecules, but they have a great affinity to cling to or combine with other constituents. For example, if water vapour and sulphur dioxide gas combine, they form sulphuric acid aerosols — larger molecules that scatter the longer wavelength colors. Other larger gaseous molecules may be emitted from vegetation and industrial and transportation sources that also scatter light at the longer wavelengths. As a result, the sum of the scattered wavelengths in the full complement of scattering produces alternate hues to the dominant blues ranging from the murky greys and browns common in polluted urban atmospheres to vivid oranges and reds at low sun angles.

An atmosphere filled with dust will appear reddish because the scattering and absorption of the shorter wavelengths would only leave the red in the direct and scattered beams. Light rays may also be absorbed by the atoms, molecules, and dusts they strike. By absorbing light in specific wavelengths, these constituents can change the atmosphere’s color. An atmosphere thick with smoke, for example, might appear brownish or even black as the smoke particles absorb, reflect and scatter the daylight. When a number of atmospheric constituents scatter and absorb different wavelengths in a different way, the combined result leaves the sky a murky brown or gray.

Clouds, which reflect, scatter, and absorb sunlight, will also alter sky color, as can falling rain and snow. Mie scattering, which is not strongly dependent on the light’s wavelength, produces the whitish color we see when viewing the sun through fog or mist. The color of surfaces, natural and human-altered, may tinge the horizon with reflected color. And more and more, the lights, particularly the yellowish mercury lamps, of cities and other large infrastructures alter the sky color. City street and parking lot lighting often casts a colored pall on the underside of low-lying clouds and fogs.”

http://math.ucr.edu/home/baez/physics/General/BlueSky/blue_sky.html
“When the air is clear the sunset will appear yellow, because the light from the sun has passed a long distance through air and some of the blue light has been scattered away. If the air is polluted with small particles, natural or otherwise, the sunset will be more red. Sunsets over the sea may also be orange, due to salt particles in the air, which are effective Tyndall scatterers. The sky around the sun is seen reddened, as well as the light coming directly from the sun. This is because all light is scattered relatively well through small angles—but blue light is then more likely to be scattered twice or more over the greater distances, leaving the yellow, red and orange colours.

Clouds and dust haze appear white because they consist of particles larger than the wavelengths of light, which scatter all wavelengths equally (Mie scattering). But sometimes there might be other particles in the air that are much smaller. Some mountainous regions are famous for their blue haze. Aerosols of terpenes from the vegetation react with ozone in the atmosphere to form small particles about 200 nm across, and these particles scatter the blue light. A forest fire or volcanic eruption may occasionally fill the atmosphere with fine particles of 500—800 nm across, being the right size to scatter red light. This gives the opposite to the usual Tyndall effect, and may cause the moon to have a blue tinge since the red light has been scattered out. This is a very rare phenomenon, occurring literally once in a blue moon.”

http://en.wikipedia.org/wiki/Haze
“Haze is traditionally an atmospheric phenomenon where dust, smoke and other dry particles obscure the clarity of the sky. The World Meteorological Organization manual of codes includes a classification of horizontal obscuration into categories of fog, ice fog, steam fog, mist, haze, smoke, volcanic ash, dust, sand and snow.[1] Sources for haze particles include farming (ploughing in dry weather), traffic, industry, and wildfires. Seen from afar (e.g. approaching airplane) and depending upon the direction of view with respect to the sun, haze may appear brownish or bluish, while mist tends to be bluish-grey.”

http://en.wikipedia.org/wiki/Light_pollution
“Skyglow refers to the glow effect that can be seen over populated areas. It is the combination of all light reflected from what it has illuminated escaping up into the sky and from all of the badly directed light in that area that also escapes into the sky, being scattered (redirected) by the atmosphere back toward the ground. This scattering is very strongly related to the wavelength of the light when the air is very clear (with very little aerosols). Rayleigh scattering dominates in such clear air, making the sky appear blue in the daytime. When there is significant aerosol (typical of most modern polluted conditions), the scattered light has less dependence on wavelength, making a whiter daytime sky. Because of this Rayleigh effect, and because of the eye’s increased sensitivity to white or blue-rich light sources when adapted to very low light levels (see Purkinje effect), white or blue-rich light contributes significantly more to sky-glow than an equal amount of yellow light. Sky glow is of particular irritation to astronomers, because it reduces contrast in the night sky to the extent where it may even become impossible to see any but the brightest stars.”

According to the links above the cloudless blue sky you are observing may not be a natural blue sky after all, especially if some of the phenomena mentioned above is happening in your area. Your sky may be blue but bottom line is, you are still getting sprayed.