Melissa Bacelar :Pet Rescuer with a heart of gold!!!! Hear her story! 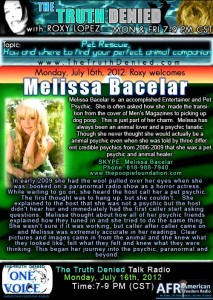 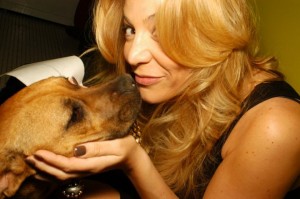 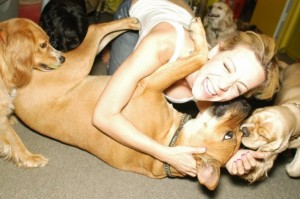 Melissa has adopted 10 dogs that live with her in her own private home!!!! So she really does “Walk like she talks!”

Listen to the 45 minute show here!

“Melissa Bacelar is  an accomplished Entertainer and Pet Psychic.  She is often asked how she  made the transition from the cover of Men’s Magazines to picking up dog poop.  This is just part of her charm.  Melissa has always been an animal lover and a psychic fanatic.  Though she never thought she would actually be a animal psychic even when she was told by three different credible psychics from 2006-2009 that she was a pet psychic and animal healer. 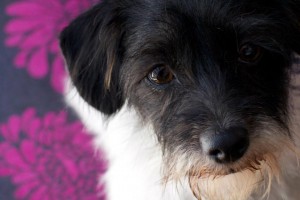 In early 2009 she had the wool pulled over her eyes when she was  booked on a paranormal radio show as a horror actress. While waiting to go on she heard the host call her a pet psychic.  The first thought was to hang up, but she couldn’t.   She explained to the host that she was  not a psychic but the host didn’t hear her and immediately had the first caller start asking questions.  Melissa thought about how all of her psychic friends explained how they tuned in and she tried to do the same thing. She wasn’t sure if it was working, but caller after caller came on and Melissa was extremely accurate in her readings. Clear pictures and images came in from the animal and she knew what they looked like, felt what they felt and knew what they were thinking. This began her journey into the psychic, paranormal and beyond.

It was a fun experience, but not one she’d thought she’d repeat until she agreed to volunteer at the Best Friend’s Lint Roller Party to do animal readings. Melissa will do anything for an animal charity.  She had a full waiting list with in moments of her arrival and pet owners were in tears connecting with past animals and those living. This is when she accepted the gifts she had without a shadow of a doubt.  Melissa knew she was right were she belonged.

Once Melissa accepted her gifts the fur started to fly and she was asked to appear on several radio shows, write for world renowned dog magazine The American Dog Magazine and put a weekly column up on popular  website WeHo News.”

We welcome Melissa back for interviews in the future, especially if she has a fundraiser and a call to action! Please listen to the interview with her! She truly sparkles!!!!!

10% of all proceeds goes directly to helping homeless animals!