“PHOENIX (AP) – People across the Southwest got an early morning sky show, courtesy of a trio of unarmed missiles fired from New Mexico, 1 of which left a brilliant contrail that changed colors as it was illuminated by the rising sun.

The twisting cloud-like formation was visible in southern Colorado, Phoenix, Salt Lake City and Las Vegas just before sunrise, and led to hundreds of calls and emails to area television stations.” See more of the story here: http://www.kpho.com

“A spokesman for the U.S. Army’s White Sands Missile Range tells The Associated Press the contrail was from a Juno ballistic missile that was fired at 6:30 a.m. MDT Thursday from Fort Wingate near Gallup, N.M.

The Juno missile was then targeted by an advanced version of the Patriot missile fired from White Sands.

Some tabloids actually reported  that residents  were “surprised” and some were  even shocked as well confused by the large explosion of the unusual contrail. Police officers who were  fielding the calls were somewhat confused, as there had been no warning of the military “exercise”.

“When I saw it, it surprised the heck out of me, and I thought, ‘Wow, that’s not something you see every day,'” said San Juan County deputy J.J. Roberts. “So I pulled over, pulled out my iPhone and started taking some pictures and video.”

The “explosion” was a normal separation of the first and second stages of the unarmed Juno ballistic missile that was fired at 6:30 a.m. MDT from Fort Wingate near Gallup, N.M., said Drew Hamilton, a spokesman for the U.S. Army’s White Sands Missile Range. The expended first stage landed in a designated area of U.S. Forest Service Land.“http://www.usnews.com/science/news/articles/2012/09/13/phoenix-vegas-residents-awed-by-missile-contrail

This report that came in even spells it out, but the questions being asked are “Why weren’t officials properly informed about the supposed “test”? Mainstream news has not commented.

“Drew Hamilton with the White Sands Base in New Mexico said a Juno missile was launched from Fort Wingate near Gallup toward White Sands and a pair of missiles brought it down.

“We were testing the Patriot Advanced Capability 3. The Juno was the target and they fired two Patriots from White Sands to successfully intercept it.”

Hamilton said the tests are infrequent.

Vandenburg Air Force Base, three hours north of Los Angeles, is also missile-testing Thursday, according to 2nd Lt. Kaylee Ausbun at that base.

An Atlas V is scheduled to launch 2:39 p.m. The missile may or may not be visible in the Valley.”http://ktar.com/22/1574982/Missile-streaks-across-Valley-skies-during-early-morning 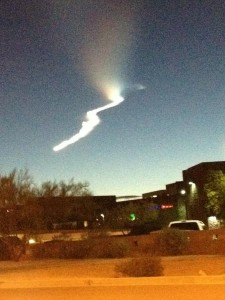 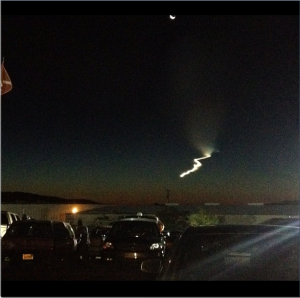 We would like your opinion on this story. Do you think that this type of target practice should be allowed over residential areas of the Southwest?

We will be happy to tally your votes and post them in one week.