This story caught my attention, mainly because of the difference in the eye witness testimonies verses Coast Guard reports.  It has also caught my attention because most of the USA , maybe  even the world, have no idea what Oil companies like SHELL oil are even  doing up in Dutch Harbor Alaska. Moreover, Shell oil has plans to drill in the most fruitful area of the world!  Now why would the coast guard lay low on this story? There are seemingly conflicting reports from the coast guard and the Alaskan residents.

According to The  Anchorage Daily News report  , “The ship, part of a group of vessels heading to the Alaska Arctic for exploratory drilling, had been resupplying and moored in Unalaska Bay near Hog Island for about two weeks. It started moving about 5:20 p.m. Saturday in winds gusting to more than 30 knots, Coast Guard officials said.”

The coast guard reported  that the exploratory ship never ran aground.Alaskan residents reported that “its stern hit rocks before the vessel was towed off.”

“It was on land,”  “It was as far as it could go … it could not have gone any farther unless it turned and gone broadside.”

Laxfoss also snapped photos and watched, worried that the ship would turn parallel to the waves and shore. A local tugboat, the Saratoga, ran the ship’s line out to a larger tug that pulled it away, he said.

“Thank god it only had the stern up on the rocks, and thank god that first tug boat got him out and got him out quick,” Laxfoss said. “They were good.”

“They were lucky, very lucky,” he added. 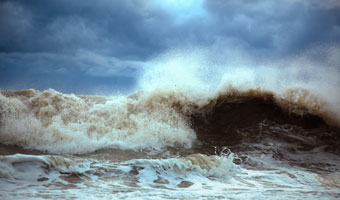 Something to think about :  I don’t think that Shell Oil ever intended for  this story to go public. They never commented on the situation at all, and I can only surmise as to why.If the discovery/drill ships are already encountering trouble at this early stage of the game, just imagine what might occur when they have there deep sea oil  rigs set up off of the coast of Alaska. The Bering Sea, Aleutian Islands and Gulf of Alaska are some of the roughest seas and  the weather is highly unpredictable, and downright  deadly. As an example, a 2003 U.S. Labor Department’s statistic reported About 152 of every 100,000 fishermen and women are killed on the job every year. That’s the highest fatality rate of any occupation, slightly higher than the rate of loggers and more than nine times the rate of firefighters and police officers.Out of 948 work-related deaths that took place in Alaska during 1990-2006, one-third (311) occurred to fishermen.
“Bad weather and rough seas are often factors of fatalities for Alaskan fisherman.”
Think about it.  Why on earth would Shell Oil want to drill off the coast of Alaska with in one of the  harshest Sea environments in the entire world? Have they forgotten about the Gulf Oil Spill, largest oil spill in history?
Other facts to consider.
Did you know that…….

The Bering Sea shelfbreak is the dominant driver of  primary productivity in the Bering Sea & is know as the Greenbelt mainly for constant production of phytoplankton ?

The second biggest  driver of productivity in the Bering Sea is seasonal sea ice that, in part, triggers the spring phytoplankton bloom.

“Seasonal melting of sea ice causes an influx of lower salinity water into the middle and other shelf areas, causing stratification and hydrographic effects which influence productivity.In addition to the hydrographic and productivity influence of melting sea ice, the ice itself also provides an attachment substrate for the growth of algae as well as interstitial ice algae.Some evidence suggests that great changes to the Bering Sea ecosystem have already occurred. Warm water conditions in the summer of 1997 resulted in a massive bloom of low energy coccolithophorid phytoplankton (Stockwell et al. 2001). A long record ofcarbon isotopes, which is reflective of primary production trends of the Bering Sea, exists from historical samples of bowhead whalebaleen. ”  http://en.wikipedia.org/wiki/Bering_Sea

Also, check out the billions of pounds of fish that are caught yearly, feeding the world.  http://dutchharbortelegraph.com/fisheries-update-for-july-p526-116.htm

What shall we do to fight off the OIL DRILLING in ALASKA?

Proof :Senator vows to focus on reducing red tape for 2013 and beyond during U.S. Senate Committee hearing

“This summer’s preliminary exploratory oil drilling in Alaska’s Arctic waters made significant progress toward next season’s work and streamlined the way for more aggressive development next year, according to testimony provided by a wide range of local, federal and industry officials during a hearing of the Senate Committee on Commerce, Science and Transportation held in Anchorage on Thursday and chaired by U.S. Sen. Mark Begich.”  http://dutchharbortelegraph.com/begich-receives-upbeat-report-from-federal-and-industry-officials-on-o-p594-122.htm

*Please stay tuned for future updates on the US NAVY Bomb Blasts to encompass the Alaskan region as well.