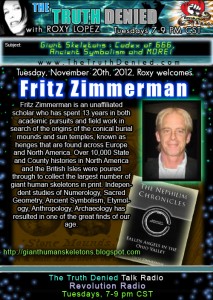 Fritz Zimmerman is the author of The Nephilim Chronicles: A Travel Guide to the Ancient Ruins in the Ohio Valley“, which guides readers into the mysterious world of the Allegewi Hopewell mound builders from 1000 B.C. – 500 A.D. Two-hundred-twenty-two mound and earthworks sites have been photographed, with directions provided in Ohio, Indiana, Kentucky, West Virginia and Michigan. The Guide is the result of physically exploring over 700 burial mound and earthworks sites in the Ohio Valley and Great Lakes Region.

“This is your guide into the mysterious world of the Allegewi Hopewell mound builders, 1000 B.C.-500 A.D. 222 mound and earthworks sites have been photographed, with directions provided in Ohio, Indiana, Kentucky, West Virginia and Michigan. This is the result of 13 years of field work, investigating over 700 burial mound and earthwork sites. There are other travel guides to the burial mounds and earthworks, but for every mound and earthwork site that you visit, you will have passed by 3. The Allegewi Hopewell worshipped their ancestors and believed the dead were part of a mystified past that formed a collective that would govern the future. The earthen and stone temples were constructed to venerate the Sun Father and the Earth Mother. Discover the solar alignments of the solstices and equinox within the geometric and hilltop earthworks. Learn the signs within the natural landscape at mound and earthwork sites that were part of the worship of the Earth Mother. This publication reveals for the first time, the secrets of the ancient civilization known as the Allegewi Hopewell; who deserve to take their place amongst the Egyptians, Greeks and Romans as a people known for conquest, building and empire.” Purchase your copy now! Click the photo!

“Did a race of giant humans once roam the Biblical lands, Europe and North America? Over 300 historical accounts of giant human skeletons are presented for the first time. Massive human skeletal remains, burial mound types, symbolism, etymology, numerology and ceremonial centers are compared in the Biblical Levant, the British Isles and the Ohio Valley with stunning similarities. Genesis 6:4, “There were giants in the earth in those days; and also after that, when the sons of God came unto the daughters of men, and they bare children to them, the same became mighty men which were of old men of renown.” The giant offspring of this union between the sons of God and the daughters of men were called the Nephilim. This book takes the leap from mythology to science to discover that the Nephilim were the last vestiges of primitive species; who were known for their gigantic height. They spread from the Biblical Lands to the British Isles and the Ohio Valley.”  Purchase the book now! 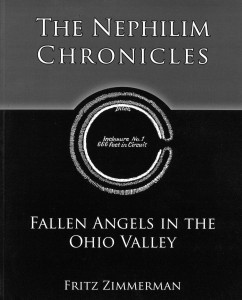