It was my pleasure to have Sonja Grace back on the program this evening . It’s not often that I have a guest return to our show when they were recently interviewed as Sonja was back in January.(Listen to the January 2013 interview here: SONJA GRACE INTERVIEW )

Why invite Sonja back so soon?

Sonja had called me a couple of weeks ago asking me  if I knew about the dead pigs floating down a  river in China. I had heard about the horrific happening, but I had no idea about the event being genocide related. Sonja quickly explained the scenario and then she calmed me with her solution. (By the way, that’s what we all love about Sonja Grace, she always has an ace, a solution to the problem! )

I had also been investigating the world wide sink holes at the time, and she mentioned the cause of the sink holes and earth changes associated and I nearly fell off of my chair!    “People really need to know what is happening Roxy!”  I agreed!  Once again, our audience loved her and listened intently to everything she had to say. The most important word that she has in her vocabulary is LOVE!  Tonight Sonja also talked about “faith”, something the world needs to have more of!

Thanks again Sonja for a wonderful and inspiring  interview! You are always welcome here at The Truth Denied!

What did we discuss on the show this evening?

EARTH CHANGES:  Sink holes around the world, what is happening?

CHINA: BEIJING-  Over 16,000 dead pigs have been found floating into Shanghai in the Huangpu River. How did this happen and what should we do about it?

H7N9 VIRUS: BEIJING — China reported yesterday that four more people in one province were seriously sickened by a bird flu virus new to humans, while cities along the eastern seaboard stepped up public health measures to guard against the disease, which has already caused two deaths.

SCIENCE: 3-15-13 Physicists announced that they had identified a particle with characteristics of the elusive Higgs boson, the so-called “God particle.” On Thursday, scientists announced that the particle, detected at the Large Hadron Collider, the world’s most powerful particle-smasher, looks even more like the Higgs boson. Is the COLLIDER causing  sink holes around the planet?

HEALING PLANET EARTH: Sonja discusses with us what she feels is the most important emotion that we can express here on earth, that being LOVE! Where do we begin to heal so that we can all learn to dance again? Why has faith  seemingly vanished?  How do we get through our current stumbling blocks, and can we really achieve breaking those imprisoning  patterns?  Sonja says “Yes we can break those patterns, once we uncover them we begin the healing process!” She also says that we really need to step up to the plate and do something about the horrors and atrocities that have gone on for centuries! Humanity needs to heal it up, and now might be a better time than ever! What are we waiting for ?

Please listen to the entire interview, and if you find the need, give Sonja a call at (503) 746-6525 or make an appointment through her website www.sonjagrace.com

If you missed the LIVE interview with Sonja Grace, please listen to it now!

Internationally renowned author and Mystic Healer, Sonja Grace has been offering her clients immediate stability, clarity, and guidance for over thirty years. Through her healing, counseling and spiritual processing, Sonja has a wide variety of talent to choose from in which she accesses her ability to channel and communicate with the divine. She sees and receives messages from loved ones who have crossed over and offers a venue for healing in this world and the spirit world. Grace works in the healing realm helping clients to identify where the discomfort is in the physical, mental, emotional and spiritual body. She provides medical scans and defies time and space with her cellular healing work. Sonja is able to execute all levels of her work from a distance and over the phone. Her ability to read and clear the karmic threads to past lives helps clients heal lifetimes of patterns. Two time author of Angels in the 21st Century and her latest book, Earth Ways Healing Medicine for the Soul, provides a pathway to the four seasons through prayer and ceremony and is a companion to the film presentation Earth Ways Series. (Website http://sonjagrace.com/) 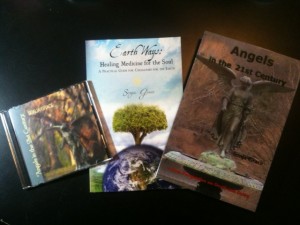 Links for Discussion points on the show tonight:

Regarding Dead Pigs in China:

H7N9 VIRUS- BEIJING — China reported yesterday that four more people in one province were seriously sickened by a bird flu virus new to humans, while cities along the eastern seaboard stepped up public health measures to guard against the disease, which has already caused two deaths. http://www.todayonline.com/chinaindia/china/4-more-seriously-ill-h7n9-virus-jiangsu