TOP 100 BILLIONAIRES LIST: What do they do with all that money? 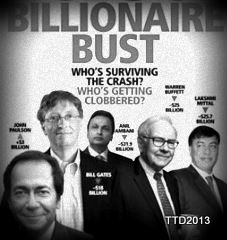 The number one Billionaire in the world is none other that Carlos Slim whose net worth is over 75 Billion Dollars! Of course number two, is Microsoft’s Bill Gates.

Most of Slim’s fortune is invested in a handful of publicly traded companies. The largest among them is America Movil, in which he owns a 44 percent stake. His next biggest positions are in banking and insurance firm Grupo Financiero Inbursa and mining company Minera Frisco. Slim’s stakes in half a dozen other companies, including New York Times, Philip Morris and Saks, make up the balance of his public holdings. Many of these companies pay a dividend.

According to data compiled by Bloomberg, Slim has received more than $5 billion in dividend income after taxes in the past decade. Based on an analysis of his insider transactions and dividends, the Mexican investor probably has more than $6 billion in art, cash and other investable assets. He also has about $1.5 billion in debt, according a person familiar with his holdings who asked not to be identified because the matter is private.

Because calculating net worth requires a degree of estimation, we have provided bull and bear case scenarios that would make a person’s fortune higher or lower than our estimate. A confidence rating also is included on each profile.

5 Star. The majority of the individual’s fortune is held in publicly traded companies. The billionaire or their representatives provides insight on the net worth calculation.

4 Star. The majority of the individual’s fortune is held in publicly traded companies or private operations in a country where transparent data is available. The billionaire may hold shares through a holding company where ownership is not transparent. The billionaire or their representatives may provide insight on the net worth calculation.

3 Star. The majority of the individual’s fortune is held in private companies, or public companies based in a country where transparent information is often unreliable. The billionaire or their representatives won’t comment on the net worth calculation.

2 Star. The majority of the individual’s fortune is held in private assets. Often more than half of the calculation is based on an estimation of cash and other outside investments. The billionaire or their representatives won’t comment on the net worth estimate.

1 Star. The majority of the individual’s fortune is held in private assets where limited information is available. Often nearly all of the calculation is based on an estimation of cash and other investable securities. The billionaire or their representatives won’t comment on the net worth estimate.

Born to a Lebanese immigrant, Carlos Slim Helu earned a civil engineering degree at the National Autonomous University of Mexico School of Engineering in 1961. At age 25, he started the construction company Inmobiliaria Carso, and invested during the Mexican debt crisis of the 1980s, buying interests in tobacco, copper and mining. He also bought the restaurant and retail chain Sanborn Hermanos. In the 1990s, he took control of Telmex, the state-owned telephone company, and Grupo Condumex, a manufacturer of wire and fiber-optic cable.

A decade later, he began acquiring mobile phone operations throughout Latin America under the banner of American Movil, which he merged with Telmex in 2011. Despite his philanthropy — he has seeded his charitable foundation with more than $3 billion — Slim’s grip on the Mexican economy often draws the wrath of competitors and government regulators. A baseball fan, he is a supporter of educational causes.

What do BILLIONAIRES  invest in , you may ask yourselves?

For one, Microsoft founder Bill Gates continues to pour millions of dollars into high-risk geoengineering projects that purport to offer a solution to global warming yet have been savaged by environmentalists as potentially posing a greater threat than climate change itself.

“Concern is now growing that the small but influential group of scientists, and their backers, may have a disproportionate effect on major decisions about geoengineering research and policy,” reports the London Guardian, quoting critics who allege that Gates’ funding has enabled geoengineering advocates to “dominate the deliberations of the UN’s Intergovernmental Panel on Climate Change.”

Visit Bloomberg for the remainder of the list!   http://www.bloomberg.com/billionaires/2013-04-12/aaa

2 thoughts on “TOP 100 BILLIONAIRES LIST: What do they do with all that money?”