We didn’t want to waste any of  Brad Olsen’s precious time, so tonight  we jumped right down  into the proverbial rabbit hole, and this time it was deep!  The audience was both stimulated and awed, at the same time, Brad seemed to open up a can of worms for the listeners who lit up the chat room. One question simply lead to another making for a very exciting yet somehow familiar journey. We have all heard the stories of places like Area-51, and Underground Alien  bases such as those in  Dulce, NM.  We have seen UFO’s in our skies, and we have heard the rumors of the US Military recovering  Alien  crafts as well as  beings in Roswell, NM.  The fact is, we have heard this all before!  Brad Olsen puts a new twist on all of it though, as he  explains the meaning of  secrecy and the key to living free.  He believes that the lies need to be exposed, as the criminals behind these secret government programs…”The gig is up”!  Said Brad.

” It’s time for humanity to awaken to our highest potential and evolve and manifest the world we want to live in by means of Charity, Compassion & Wisdom.”  ~Brad Olsen

Thanks Brad, we all need to hear that!!!

What was discussed on the show ?

Listen to the show now and enjoy the ride!!! NOTE! This is the entire 2 hour show, previously YOU TUBE had only loaded 45 minutes of this video. This is a great 2 hour episode,do us a favor and  pass it on.

“Future Esoteric” has been awarded the top honor of “2013 Best Book” of the year, in the “Category of    NEW AGE,” issued by the Pinnacle Book Achievement Awards! 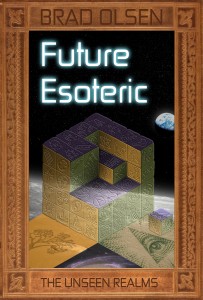 Purchase your copy of  FUTURE ESOTERIC

“Brad Olsen’s critically acclaimed “Sacred Places: 108 Destinations” series added author Karen Tate in 2005 with her Sacred Places of Goddess title. The first book in the series Sacred Places: North America was released as a second edition in April, 2008 to rave reviews and a gold award for “Best Travel Book of the Year.” Sacred Places Around the World” was reissued as a second edition in February, 2004, and his newest book is Sacred Places Europe: 108 Destinations, released March, 2007. Both titles were nominated as “Travel Guide of the Year” by Foreword Magazine. CCC Publishing is distributed by Independent Publishers Group.

Brad is also the author/illustrator of the “Extreme Adventures” series of adrenaline-pumping guidebooks. Extreme Adventures Hawaii and Extreme Adventures Northern California were both released by Hunter Publishing in 1998. In July, 2005 he was interviewed for the Outdoor Life Network new extreme sports series called “The World’s Wildest Rides.”

Brad Olsen is in production creating a television series highlighting the wonder and mystery of worldwide sacred places. It is currently being shopped around at major cable networks. His commentaries have appeared on National Public Radio, CNN, the X-Zone and the Travel Channel. Brad enjoys public speaking on journeys to sacred places and extended global explorations. He has also photographed and written the script for two dozen Visual Travel Tours (uploadable travel guide podcasts).”

We have invited Brad Olsen to come back onto the show in a couple of months! He is also working on a follow up book to Future Esoteric, so we do look forward to hearing from Brad again in the very near future!