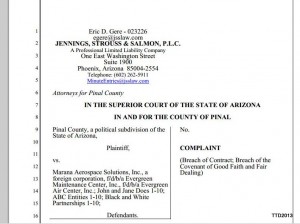 12 thoughts on “Evergreen breaches covenant with Arizona (Part 2, the complaint)”