Science supports Chemtrails;Tell it to the The Donington Post in New Zealand 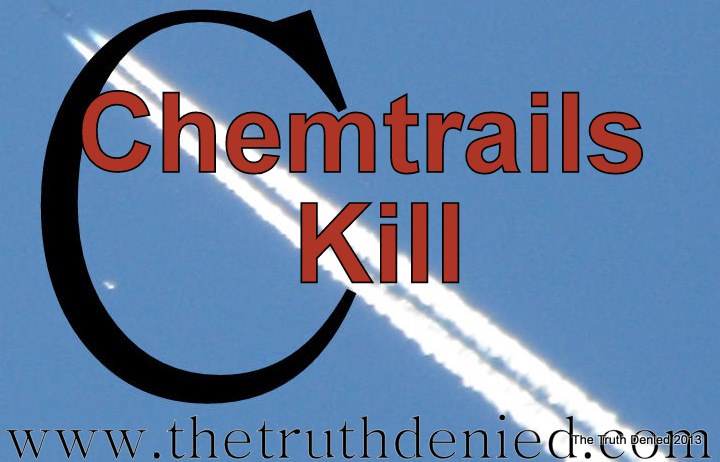 Apparently, those who presently  deny the existence of chemtrails  are being persuaded to believe the out of date bogus scientific explanation instead.  Once again, chemtrail debunkers and the likes continue delivering non-truths to the general public because the public seems to buy it up! Debunkers are so convincing and continue to beat a dead horse  using the old adage of “vapor trails ” to explain away chemtrails. Question: aren’t these debunkers getting bored of the same old tired excuses, because I know that I am.

An example of this is an article posted in The Donington Post, New Zealand. It came up in a  post  by Clare Swinney who is a member of the Faceboook Group known as   “Chemtrails over NZ”  The article is written by Matt Steward. 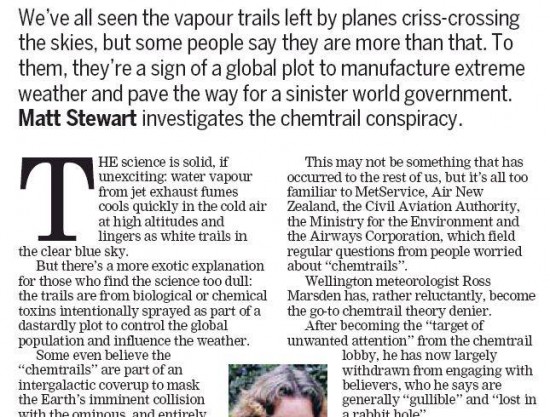 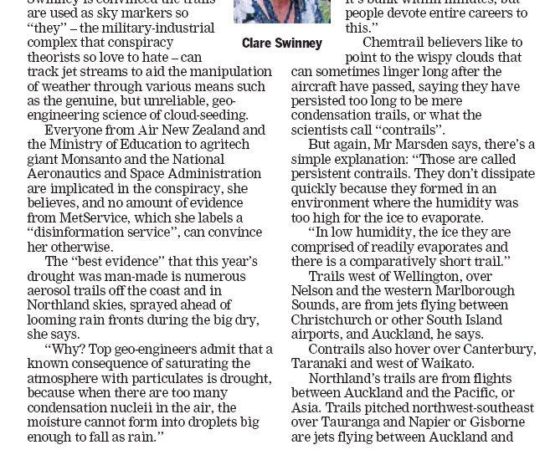 The article mentions that:
“The Science is solid, if unexciting water vapor from jet exhaust fumes cools quickly in the cold air at high altitudes and lingers as white trails in the clear blue sky”.

No, really? The old “lingering vapor contrail”  garbage. Tells me that cannot seem to come up with something new, and chemtrail activists seem to get hung up on this every time it comes up in a debate.

Word to the wise, it’s cow manure! It’s an excuse and a conspiracy in itself to derail those who are just learning about chemtrails.

The  statement seems to reflect the thoughts from  this article:
Weather WizKids – Clouds
“Contrails are condensation trails left behind jet aircrafts. Contrails form when hot humid air from jet exhaust mixes with environmental air of low vapor pressure and low temperature. The mixing is a result of turbulence generated by the engine exhaust.”

Both articles give out  false information, or better known at disinformation.  Below is a definition of contrails from LEOTC Project, funded by Minister of Education, the Royal Society of New Zealand. Downloaded from NASA
The Kiwi Kids Cloud Identification Guide

“Contrails are formed when particles from aircraft jet engines mix with the water vapour in the air. The water vapour condenses and freezes around the particles causing long white trails across the sky.”

Do you notice what is missing in both previous article? It is the term ” particle”.  Particles play a big role  in persistent  jet contrails as well as  in influencing the weather  Contrails, jet contrails to be exact, are an environmental problem, it’s as simple as that! It’s not rocket science! But there is so much more it will make your head spin!

Here is the science:
a collection of papers presented at the 14th International Conference on Nucleation and Atmospheric Aerosols, Helsinki, 26 – 30 August 1996
“A series of experiments has been performed observing contrails formation of twin-angine jet aircraft (ATTAS-VFW 614 and Airbus A310-300) run with different sulfur containing fuels on the two engines at the same time. The fuel sulfur mass content was varied from 2 to 5500 ppm. The results suggest that contrails particles form mainly from soot particles. The higher the sulfur content the more the soot particles get activated as condensation neclei.”

Here’s the deal. Trails that persist in an unfavorable condition in theory contain particles far beyond the normal jet fuel, this is fact. These particles pose a serious threat to earths environment , and we need to get this changed  as soon as possible. Contrails are  not harmless and we need to dispose of the myth that  contrails are simply just water vapor.

There is solid scientific evidence to support that chemtrails not only exist, but that they are harmful. Chemtrail debunkers TWIST THE TRUTH and use false scientific garbage to make fun of chemtrail activists, so be warned, it is there tell tale sign.

If you wish to aid us in this awareness , please drop us an email at info@thetruthdenied.com today and one of us will get back to you shortly.