(Above photo) :  Geoengineering technologies attempt to mitigate continued warming of the Earth’s climate. The technologies vary in complexity from planting trees for carbon sequestration to launching mirrors into space for sunlight reflection. Most of the technologies are not yet proven and are at the theoretical or research phase. Several of the proposed technologies were recently conceived; if they prove feasible and effective, they would require large amounts of funding for full-scale deployment; and generally they lack political, scientific, and public support. Figure 1. Geoengineering Technology Options from the website: http://www.geoengineeringwatch.org

Here is an  Geoengineering APPARATUS PATENT  (Photo above)

Biophysical geoengineering compositions and methods
US 8033879 B2
ABSTRACT
Described here are compositions, methods and apparatus for biological and physical geoengineering. Disclosed are inorganic particles, prill, pucks, or floats for dispersal on a body of water, the compositions having several properties: 1) positive buoyancy, 2) a sustained-release matrix for delivery of iron, calcium, magnesium, zinc, copper, molybdenum, manganese, cobalt, boron, selenium, vanadium, chromium, nickel, sulfur, nitrogen, phosphorus, silicon, preferably as a combination thereof, at biologically efficacious levels, and synergically, 3) a light-reflective surface for increasing planetary albedo when dispersed over large surfaces. These compositions are found to A) increase yields for pelagic aquaculture, B) increase carbon sequestration, and C) provide immediate relief from global warming by directly increasing surface albedo and indirectly by increasing cloud nucleation activity. A preferred composition comprises a mixture of inorganic salts and binders (such as a glass or ceramic) effective for increasing the growth of primary aquatic producers such as coccolithophorids, diatoms, silicoflagellates, dinoflagellates, and microalgae (and higher trophic levels) in a sustained-release composition having a T1/2 of 0.5-3 years. To validate resultant carbon fixation and sequestration, a vertical spar buoy is provided. The buoy is designed to resist wave motion while supporting a stable long-term platform and submerged spaceframe with laser particle counters suspended below the 100 year horizon. Validation of exsolation energy credits, issuance of an associated financial instrument, and trading markets for those instruments are also described.

Another  example of a geoengineering patent would be  (photo above)  PATENT # 2480967 called AERIAL DISCHARGE DEVICE used in geoengineering. Read the PATENT for yourself.

If you would like to see a list of current geoengineering patents, please check out this page http://www.geoengineeringwatch.org/links-to-geoengineering-patents/

For the history of geoengineering, this is a very informative website: http://www.seektress.com/patlist.htm 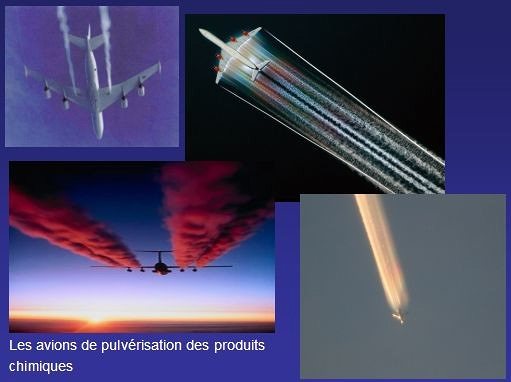 Even though this website is not written  in English, it has a very efficient translator:  http://coeurdetoile.wordpress.com/2010/03/31/pourquoi-ces-epandages-aeriens-%E2%80%A6-et-en-suivant%E2%80%A6-a-la-problematique-de-ces-pollutions-frequentielles-et-chimiques-des-reponses-energetique-existent/

050719-F-2585R-001 The Modular Aerial Spray System on Air Force Reserve Command C-130 aircraft can use a setting called ultra-low-volume and specialized spray boom nozzles like these to spread one-half to an ounce of chemical over an acre. The droplets need only be large enough to attach to the hair on a mosquitos leg to be effective. (U.S. Air Force photo by Master Sgt. Bryan Ripple)

Check out the website because some of it is legitimate aerial spraying for mosquitoes, cleaning up oil spills,and Aerial Firefighting

Please join us for two special radio shows on the subject of chemtrails! Click the posters to view more!