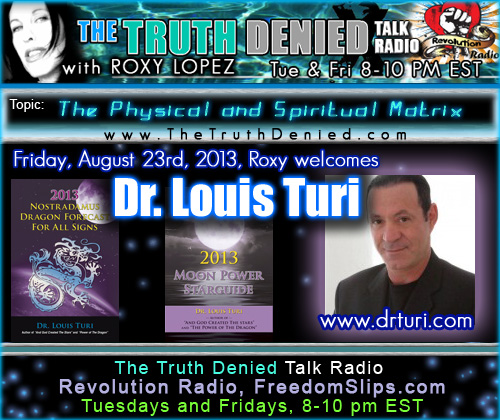 Listen to the full interview here!

He predicted three important events that are coming up in September of 2013.

Listen closely to what Dr. Turi predicted on the program today, he asks the audience to write down  the dates  so he can prove his  accuracy to the world.

Since 1991 Dr. Turi built a Worldwide audience where he is indeed considered as one of the most accurate

Points made on the show today:

Listen to the entire program here!!

Like the great prophet, Nostradamus, Dr. Turi was born and raised in Provence, France. He was influenced by Nostradamus’ methods of Divine Astrology and spent many years reviving the Seer’s rare method. He grew up speaking the same now disappearing dialect. In 1976 he received the highest distinction Musicianship Award Cup and graduated from the Royal School of Music in London. He moved to the US in 1984 and has since established himself as a successful astrologer, author, and lecturer. In 1993 he received a metaphysical Doctorate from the Progressive Universal Life Church based in Sacramento, California. His notoriety skyrocketed after rekindling, practicing and teaching Nostradamus’ rare Divine Astrology method, which he calls Astropsychology. He has also appeared on numerous radio and television programs worldwide. Dr. Turi is known for the hundreds of accurate predictions he makes. He writes a yearly periodical with all these predictions, called “Moon Power Starguide.” The printing process makes the proof of his predictions totally unarguable.

Dr. Turi is a French astrologer, a clinical hypnotherapist and an astro-psychologist He currently resides in Phoenix, AZ Visit his website www.drturi.com