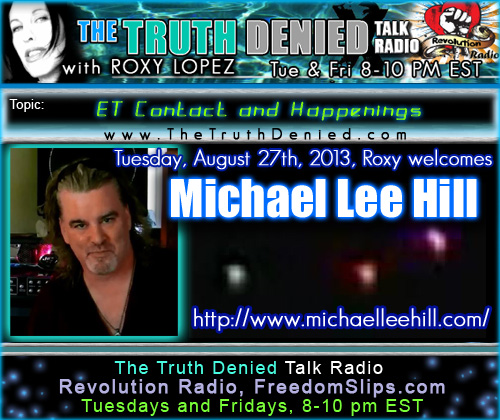 Topics covered in this interview:

Be sure to check out the upcoming UFO TOUR with Michael Lee Hill  (See below!)

Listen to the interview now!

Imagine this if you will.

You experience strange ET Contact & happenings your entire life. “They” begin to communicate through telepathy leading you to Cosmic Spiritual Truths regarding how Thought Create Reality subject matter. They begin to reveal themselves in the Physical in Orbs Of Light/Plasma over Lake Erie. They allow you to film them.

Your footage goes viral gaining worldwide attention. Your footage lands you on a prime time TV show called UFO Hunters on the History Channel. On the episode, They decide to test your blood and it is revealed you do not have normal human blood, A very rare blood anomaly/bloodline that the world’s best military and civilian doctors are at a loss to explain? The host of the show Legendary UFO Researcher Bill Birnes goes on to say “I’ve got a funny feeling that you are being recruited and there is a branch of the government that you’re being recruited for – that somehow, some way, you are a hybrid between “ET” and humans. And they are giving you a course of study preparing you to meet your ET higher self.
See his website: Website: http://www.michaelleehill.com/

Michael states that “Stories of the unexplained phenomena date back over 150 years to the indigenous tribes. My Lake Eri eUFO footage has been featured on Fox News, Coast to Coast AM,Rense.com, hbccufo.org and in the feature film’s “UFO’s unplugged with Dan Aykroyd”, And David Sereda’s latest film From Here To Andromeda which I also co-produced. I’ve most recently been featured on the History Channel’s “UFO’s Hunters” show and filmed a pilot for a Alien/UFO based show for Spike TV in 2012 that was never aired for various reasons.”

Check out the LAKE ERIE UFO TOUR, click the poster below!

UFO Hunters takes a closer look at footage of mysterious orbs or light off the shores of Lake Erie.

Bill  Birnes has requested that Michael Lee Hill  participate in some  upcoming media events as well as presenting at two Mufon conferences! So stay tuned for more information in the coming weeks!

Michael Lee Hill will be our guest tonight. He was on UFO Hunters a while back, and we will be talking about his Lake Erie UFO videos, and much much more.

Lots of Anunnaki, Creatine Kinase (CK) in the blood, and rock and roll.

Listen to the March 2013 interview here…