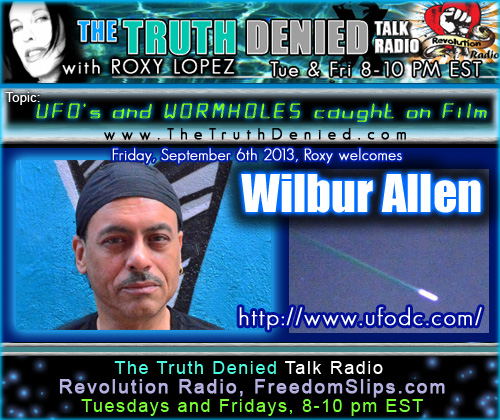 Topic: Wilbur Allen filmed in the Sedona Desert with Nat Geo, and by the time he returned to his home in Washington DC, seems he was confronted with the same craft that he had filmed in Area-51 as well as Sedona. He is convinced these are the same crafts and wormholes that he has been filming all along. He has notified the White House of these sightings literally  handing over the proof to White House officials,  and has not had a a single response from them.
No response from the White House? What does this say to Wilbur Allen?
He feels that either the White House is covering up the UFO activity in the DC skies, or that they are completely unaware of the activity. Either way, we need to push the evidence forward until a possible disclosure is achieved.

Before the interview this evening , Roxy Lopez spoke with one of  Allen’s collegues who witnessed the  Area -51 event as well as  the Sedona sightings with Allen.  Mr. Eron McCauley (of the Riley Martin Show with Howard Stern)  expressed a great  deal of interest  for  appearing on THE TRUTH DENIED TALK RADIO SHOW   and wishes to explain these events  in detail at a future date. We will keep you posted when we have the date. We have also invited Mr. Jim Diletosso  who is probably the best photo analyst (to determine real from fake) in  the area of UFO footage  that I know of. As we mentioned on the show, we are excited to have him on in the future!

If you would like to listen to part of the intervew with Allen and his crew, visit : http://www.youtube.com/watch?v=lyJl3fT6iMw Published on Nov 16, 2012 In conjunction with http://www.UFOdc.com Riley Martin, Wilbur Allen, Eron McCauley AREA 51 UFO encountered during expedition.

Please visit Wilbur Allen’s website at www.UFOdc.com to see the photographic evidence that at this point is undeniable!

*** ATTENTION  listeners: This live show had some outside interference, and although at times in the first 20 minutes it is annoying, it is still a great interview. Have patience while you are listening, the technical issues were eventually solved during the LIVE interview.We have decided to leave these parts that were slightly distorted in the original interview so that listeners could hear this for themselves.

Wilbur Allen reminds us of the famous abduction he encountered in Sedona Az.

“The last time Mr. Allen appeared on THE TRUTH DENIED  program, he also shared about his abduction in March of 2013, again while filming in the red rock desert of Sedona.  “What would you do if you were out in the middle of the Arizona desert at 3:45 AM in the morning with camera in hand and suddenly heard the howling and barking of coyotes & dogs in the near distance?” I think most of us would run, which is exactly what Wilbur Allen had done as well. But, when he arrived back to his hotel room, tired from the long and grueling hike in the mountains that day (with 100 pounds of camera equipment strapped to his back) and fell asleep, he was awakened at 3:00 AM. He was told to “Go outside and set up his camera”, to which Wilbur Allen immediately complied. This is how he managed to get hundreds of photos of the ET ships in the night! “The proof is in my footage”, says Allen! “It’s all there, and I have not only witnessed this discovery in Arizona, I have seen these particular ships in all of my footage, no matter where I have traveled. I do believe they are extraterrestrial in nature, and now I have the proof!” 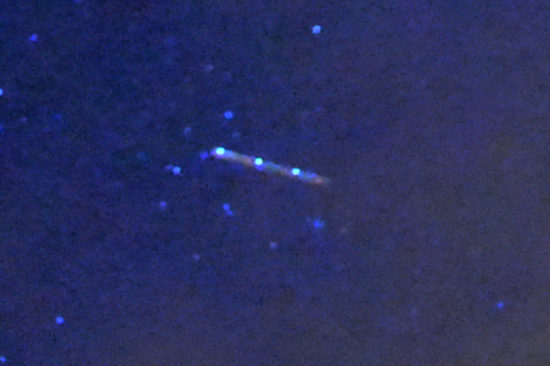 Engineer/inventor Wilbur Allen is no stranger to UFO encounters. An alien encounter in the UK at the age of 5 left him face to face with a group of grey ETs. He is a former White House/Air Force One engineer for ABC News, and a contract photographer at National Geographic.

UFO researcher Wilbur Allen will be updating us on UFO sightings that he believes are beyond this world, and he will demonstrate a craft entering and leaving our atmosphere through a wormhole or stargate. Recent footage he shot shows a sudden manifestation in Sedona, Arizona airspace, and then the craft exiting undetected two hours later. In a 2002 incident, a three and half minute photographic exposure revealed an object starting to vibrate, “and you could see an arc or a hole open in the sky,” followed by a flash of light, he detailed.

It was only in recent years that Wilbur Allen acquired the technology to photograph anomalies in the sky, using higher film sensitivity and shutter speeds, to capture objects like cloaked ships as well as worm holes. “Most of the unexplained objects in the sky are light or plasma-based spacecraft– sometimes seen as balls of light”. ~Wilbur Allen

“Allen recounted being abducted by Greys as a child growing up in the 1960s, when he lived with his family at a military base in England. Perhaps related to an alien implant in his neck, he said that he receives a signal or impulse to be at a certain locations at certain times to take photographs, where often a UFO appears out of nowhere. It’s interesting that while the aliens monitor his activities, he’s monitoring theirs via his photographic documentation.”

Check out Wilbur Allen  on previously recorded interviews with THE TRUTH DENIED:

The posters are part of his  extraordinary gallery with National Geographic:

the forensic image samples that I have:http://ngm.nationalgeographic.com/myshot/gallery/26800#/

Other sources of references made on this interview regarding increased sightings in UFO activity:

Whenever we have an unusually heavy influx of reports, our work load is increased to a commensurate degree.  Over recent years, we used to consider approximately 300 reports per month to be “normal.”  However, over the last 15 months, we have been receiving up to 1,200 reports per month.  During this  month of August, for example, we have received, to date, 953 reports.