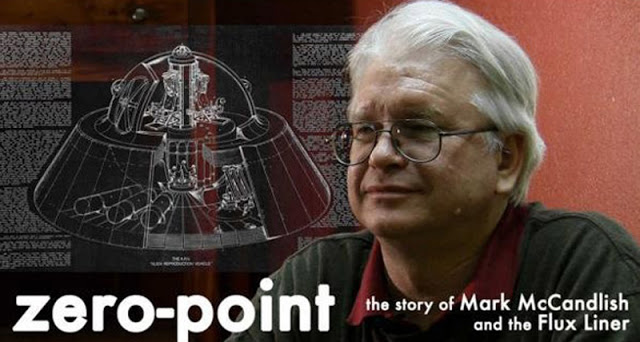 Guests : Mark McCandlish stars in the documentary  ZERO-POINT  the story of Mark McCandlish and the Flux Liner . We are also  joined tonight by Director and film maker James Allen.

UPDATE:::::NOTE TO READERS:   Within a couple of months of  our published  article and recorded interview , Director Mr. James Allen passed  away in 2013. It is quite the controversy and Mark MacCandlish and others believe that   Mr. Allen was indeed murdered.

Zero-Point: the Story of Mark McCandlish and the Flux Liner is the project of James Allen, a SCAD MFA graduate in Film and TV.

“It’s an unfinished project, with some rough edges,” says the filmmaker. “But the story is all there, the main structure is there.” With a little more funding, it is sure to go mainstream! (See below if you would like to help fund the project.)

Here are the basics of the film  ZERO POINT:

The story line is absolutely compelling and centers on the story of Mark McCandlish, a well-regarded aerospace illustrator. Some of Mark’s background  incudes  his involvement with U.S. Air Force and Air National Guard fighters, such as the F-15 Eagle and the F-16 Fighting Falcon. In 1986, Mr. McCandlish became aware that the U.S. military was in possession of some extraordinary technologies, and he  began to pursue his own private research into where it came from and how it works.  Needless to say , McCandlish’s  research led to many strange events and encounters.

“Mark was a very successful illustrator in the aeronautics and defense industry in the ’80s — he worked for all kinds of major contractors,” says Director,  James Allen.

McCandlish and a friend, a fellow aviation buff, were set to go to an air show at an Air Force base in California. But at the last minute McCandlish got a lucrative freelance gig he couldn’t turn down.

“His friend got back and said he’d met some high-level guy — like some assistant secretary of defense or something — and ended up getting into a top secret air show where he saw a bunch of prototype stuff,” Allen says. “The friend said ‘I think I saw something I’m not supposed to see’ — stealth technology and some type of manmade antigravity craft. We’re talking about potentially faster than light.”

The UFO angle is set up from the opening frames, as the film reveals a presentation from the  2001 at the National Press Club in which a number of very high-ranking, highly-credentialed people talk openly about their experience with extraterrestrial presences.

The idea is that the craft McCandlish’s  friend saw — the friend has since refused to be quoted in the film, though he doesn’t deny his account — was possibly “reverse-engineered” from an extraterrestrial craft.

In this case, the so-called “Flux Liner, or “Alien Reproduction Vehicle,” as it was also labeled, really says it all.

“A new documentary is in the works exploring claims that the government is hiding anti-gravity vehicles that have been developed, tested, and flown for decades. In order to get the documentary completed, the producers have turned to crowd sourcing to get the resources needed to complete the project.”

Writer/ Director James Allen is a filmmaker, photographer, artist and 3D
designer living in Savannah, GA, with a BFA in Visual Effects and an MFA in
Film & Television from the Savannah College of Art & Design.

Contact James Allen at http://zero-point.cc/ or email him at jamesinsavannah@gmail.com

Upon leaving the Air Force in 1974, Mr. McCandlish made use of the G.I. Bill to attend Art Center College of Design, initially under an automotive design curriculum. He later switched to an illustration major when it became clear that the influx of Japanese imports and its impact on our economy was going to reduce the possibility of being hired at GM. He later worked for a short time in the Hollywood special effects business, as a matte artist, and then was hired by the General Dynamics Corporation in Pomona, California as a technical illustrator and technical publications editor. After two years, Mark left General Dynamics and began a career freelancing for a variety of defense and aerospace contractors, mainly producing art within an aviation theme. During this time, Mark also was given the opportunity to participate in a number of media orientation rides in frontline U.S. Air Force and Air National Guard fighters, such as the F-15 Eagle and the F-16 Fighting Falcon. In 1986, Mr. McCandlish became aware that the U.S. military was in possession of some extraordinary technologies, and began to pursue his own private research into where it came from and how it works. The research led to many strange events and encounters….. visit his website here: http://www.markmccandlish.com/