The film presents Noah (Russell Crowe) and wife (Jennifer Connelly) and their sons as different from the rest of humanity based on a diet of veganism vs. meat eating and living in accordance with the ancient laws of Enoch.

Genesis 1:29 ‘Behold I have given you every herb bearing seed, which is upon the face of the earth, and every tree, which has fruit yielding seed; to you it shall be meat.’ 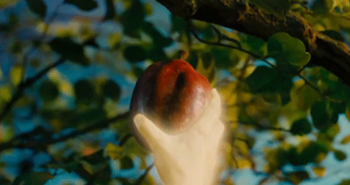 Apple is a beating heart

‘… of the tree of the knowledge of good and evil, thou shall not eat of it: for in the day that thou eat of it thou shall surely die’

There are dream sequences where we are shown the Fruit of Good and Evil as an apple with a beating heart; a clear symbol for the taking of life and the karmic results are epic.

Adam and Eve are lighted beings living what appears to be a 5th dimensional existence in the Garden that is Earth. We also see the Fallen Angels who are earth bound because of their interaction with humans; unfortunately they resemble the rock men from the NeverEnding Story which renders them somewhat comical.

We see mans wickedness by the barren clear-cut landscapes with cityscapes in the backdrop that resemble modern industrial civilization and its smoking towers of industry, there is slaughter and torture of beasts and women. Meanwhile Noah and his family, descendants of Enoch and Adam live peaceful, non violent existence in accordance with the ancient laws. 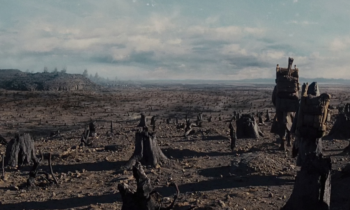 The bible and the movie both show Noah being given the gift of foresight and thru dreams, one with the help of a hallucinogenic (provided by Methuselah played by Anthony Hopkins) Noah sees that a great flood is coming and all men will be destroyed. He is shown how to build the ark and that he is responsible for saving the innocents of the planet; the animals.

The theme of the movie seems to be one of returning to the garden but it missed the mark on a few occasions. One was when Noah was given a seed from the Garden and it grew into a beautiful forest and waterway that would lead the animals to the ark – but this is somewhat at odds with the message as Noah quickly felled the trees that grew to build the ark. And in another sequence Noah killed three men – which if the karmic message in the bible and in the movie is that ‘blood begets blood’ – then Noah set in place circumstances that would result in the death paradigm we all currently exist under. 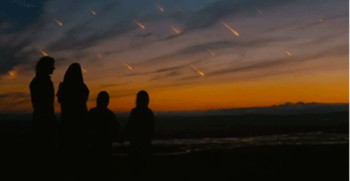 Meteor shower leading up to the flood

A number of interesting solar events occurred in the movie – a meteor shower signaling the beginning of the end, shafts of light when the fallen angels returned to heaven – and all the day time scenes showed a star filled sky – so clear that even constellations were visible. I did not see any chemtrail subliminals (but that isn’t to say there were not any). The sky sequences seemed to be the directors attempt to show that the flood was caused by some natural event – perhaps a meteor, although the film did not otherwise suggest this. The waters broke forth from deep within the earth’s crust and floods were loosed upon the land. Some of the animal sequences were wonderfully depicted, especially the birds coming to the ark. All the animals slept during the voyage. 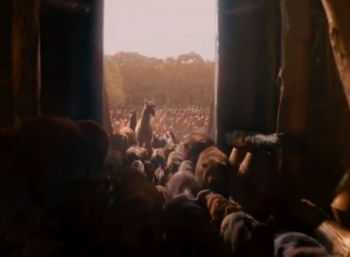 And the animals came two by two

Costume design was somewhat boring – Noah and his family in wools and cottons – since they did not kill animals – but unfortunately they had on leather boots. The rest of humanity were the usual – dirty, sweaty, moist looking characters with lanky hair, the women looking like drabs and most men were sporting a 5 o’clock shadow. 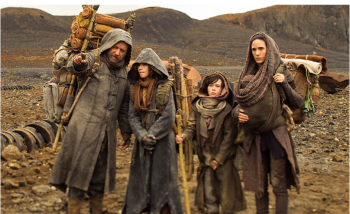 In the bible version Noah, his wife, their three sons and three wives were on the ark, but the movie diverted from this by only providing one son Shem (Douglas  Booth) with a wife Ila (Emma Watson) And the director created a protagonist in Noah’s son Ham (Logan Lerman). Noah is also responsible for the death of a girl, the girl Ham wanted. There was also the not so surprising villain added to the story (Ray Winstone) who managed to hitch a ride and he proceeded to corrupt Ham, by enticing him to eat meat which led to Ham attempting to murder his father. Blood begets blood

Noah became quite mad on the voyage and who can blame him – he wanted to murder Shem’s babies because they were female; this is not in the biblical account either – Noah believing his only purpose was to save the innocent animal kingdoms.

The movie ended, in my opinion, abruptly – showing Noah alone and drunken and Ham deciding to leave to find a wife elsewhere. You are left with the impression that it was all for naught as the ark and its inhabitants brought with them the taint of evil and it was apparent that it would all start again, as it has proven to. While some critiques say it has no basis or little basis in the bible story – my King James Version agrees with this film in its message, if not in its ability to stick to the story.

‘…and the Lord said in his heart. I will not again curse the ground any more for man’s sake, for the imagination of man’s heart is evil….’

At the end – other than the unnecessary violence I thought the production team tried to pass on a message that spoke to our relationship with animals and the planet. Without saying so attempted to show us the karmic results of failing to maintain that relationship as a sacred duty.

Why Christians would be upset over this movie – I do not understand, but I think maybe it is because the church does not address the possibility that the fruit is meat and the taking of innocent life. Because if it is – then the changes required for us to return to the Garden and live in Heaven on Earth would be clear to all and we would not need any owners.

All in all I would give this movie **** stars,  it is entertaining, but if you want the actual bible story you will be disappointed. It is a movie after all.