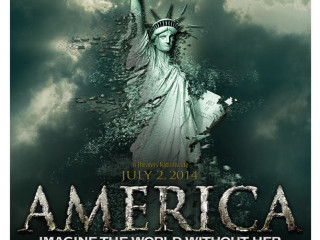 Movie “America: Imagine the World Without Her

July 13, 2014 — Dinesh D’Souza has another hit on his hands with the movie based on his new book, America: Imagine the World Without Her. In theaters on July 1, and  the movie was screened at Freedomfest 2014 in Las Vegas on Friday night. America is directed by John Sullivan and co-produced by Gray Frederickson, who won an Oscar for producing The Godfather Part II, and Gerald Molen, who won an Oscar for Schindler’s List. D’Souza and Sullivan co-directed 2016: Obama’s America –

“It was a big hit with the mostly libertarian audience.”

According to several news sources, after the screening of the movie  D’Souza said  “We should love America for what it is, despite what our government is trying to do to it.”

The HOLLYWOOD REPORTER had an interesting article dated January 2014  that really turned heads regarding the author D’Souza, reporting  that Federal authorities had  accused D’Souza of donating more than is legal to the campaign of Wendy Long, who ran in 2012 for the U.S. Senate seat vacated by Hillary Clinton three years earlier but lost to incumbent Sen. Kirsten Gillibrand. They went on to say “According to the indictment, D’Souza donated $20,000 to Long’s campaign by aggregating the money from various people and falsely reporting the source of the funds. But Gerald Molen, a co-producer of the film  2016, says the charge is politically motivated.” Not hard to believe is it?

“In America, we have a long tradition of not doing what is commonly done in too many other countries — criminalizing dissent through the selective enforcement of the law,”  said Molen

Molen told The Hollywood Reporter,“When American citizens begin to suspect that people are being arrested for alleged minor violations because of their vocal dissent against their elected representatives or rulers, it breeds disrespect and contempt for the law and suspicion of those officials. … If this unfortunate action against Dinesh is intended to deter the release of his upcoming film, America, that effort will fail.”

And so it did  the effort to deter the release was a FAIL.  AMERICA was released in theaters on schedule July 4th.

“We hold these truths to be self-evident, that all men are created equal, that they are endowed by their Creator with certain unalienable Rights, that among these are Life, Liberty and the pursuit of Happiness.”~Dinesh D’Souza 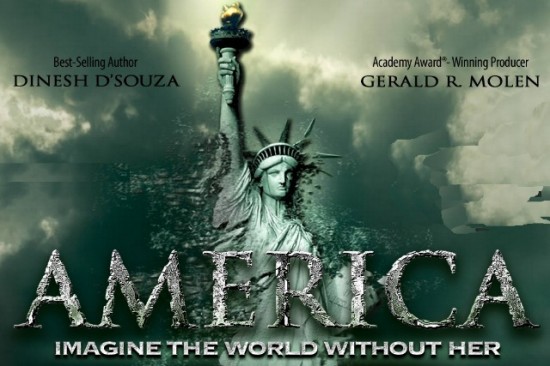 There are mixed reviews as well as emotions regarding the movie AMERICA, and TTD will post some of them.  Also scroll down for the trailer, as well  be sure to give us your feedback if you have seen the film. 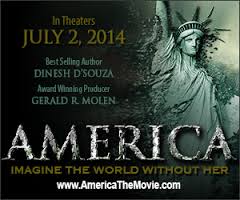 “This is a must-see movie. No excuses: just see it.”

“This movie is pure sensationalism and lacks both factual support as well as perspective. If you really want to see an actually informative documentary about America that both Democrats & Republicans can get behind, watch Inequality for All (narrated by Robert Reich). It’s on Netflix!!” Lindsey Parker

**
“Don’t waste your money in this garbage. He talks about no coercion and the trailer itself is coercive. i should have asked for my money back. Apparently Dinesh, you still think that Americans think along political lines. Well, newsflash, those of us who think don’t vote and know that Republican or Democrat, we lose!
You prop up a few “liberals” like Zinn and Chomsky as strawmen and then easily tear them down. But, worst of all, you have the nerve to suggest that the “wars” in Afghanastan, Iraq and Viet Nam were to “save” their people. You’re a PT Barnum for whatever brand of BS you’re pushing. Very telling that NOT one word was mentioned of the Banksters and Cartel Capitalists that really run the country. I guess that’s where you got your financing. In the end it’s my fault for not checking you out to find out that you’re just another mainstream lackey before I spent my hard earned money watching your phoney documentary.” Phillip Solesky
“Really though Dinesh D’Souza spews republican establishment / nationalism( arbitrary patriotism) / fascism propoganda. Have any of you seen “2016 Obama’s America.” I’m more of a conservative and that reeked of horse manure. If you are born latitudinal-just-barely-in-Texas … you are NOT intrinsically better than someone born just barely in Mexico. ( who end up in America anyway ). If I am born in Georgia, The Falcons are not intrinsically a better team than the Jets … this is completely insane.”Christopher Wanha
See more reviews here on  YOU TUBE , some of them are shockingly whitty and inspiring to say the least!

“Dinesh D’Souza has had a 25-year career as a writer, scholar, and public intellectual. A former policy analyst in the Reagan White House, D’Souza also served as John M. Olin Fellow at the American Enterprise Institute, and the Robert and Karen Rishwain Fellow at theHoover Institution at Stanford University. He served as the president of The King’s College in New York City from 2010 to 2012.

Called one of the “top young public-policy makers in the country” byInvestor’s Business Daily, D’Souza quickly became known as a major influencer on public policy through his writings. His first book,Illiberal Education (1991), publicized the phenomenon of political correctness in America’s colleges and universities and became a New York Times bestseller for 15 weeks. It has been listed as one of the most influential books of the 1990s.” Read more here : http://www.dineshdsouza.com/about/

Costco pulled D’Souza’s book from their tables last week, yet  Costco’s owners contributed more than $100,000 to Obama’s reelection campaign in 2012.

“The movie, America, is a celebration of the uniqueness of America, and a powerful and moving rebuttal to America’s critics both at home and abroad. This film begins with a simple premise: What if America never existed? What if Columbus never landed in America because there was no America? In that case, Columbus would have kept going, and perhaps made it to his intended destination, India. How different history would have been if that occurred.

There is a crisis in America — an identity crisis. What does it mean to be an American? Is America moral or is America’s wealth a product of theft? We will also contrast the principles that built America, the spirit of 1776, with the ideas that are weakening America — the spirit of 1968. Which America do you want?” D’Souza