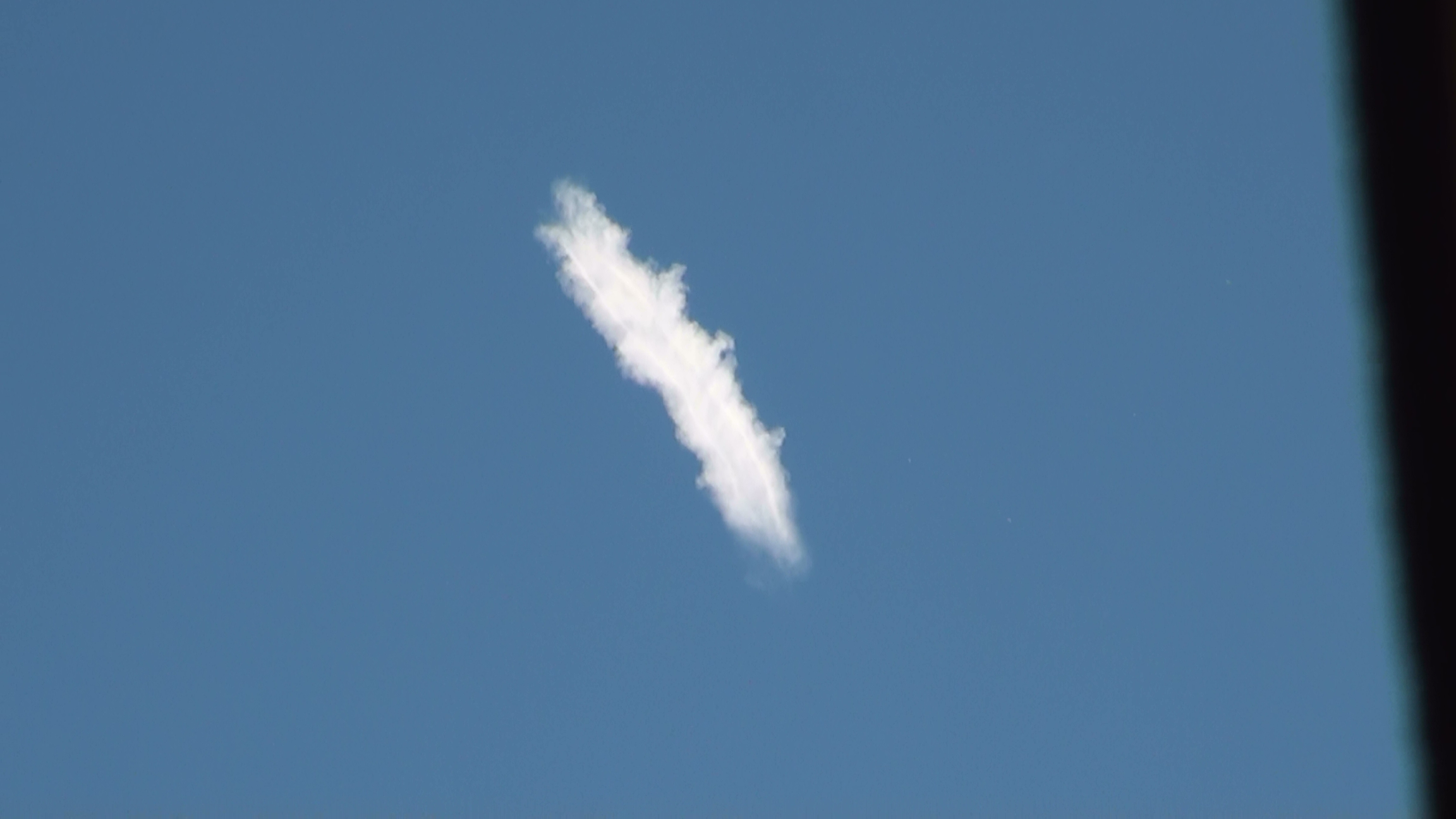 I live in the Antelope Valley, Ca. home to one of the larger Military Industrial Complex facilities in California and have witnessed numerous small scale obvious experiments connected to geoengineering and chemtrail deployment.  On the morning of July 20, 2012 prior to working in my shop I set my camcorder on it’s tripod to record chemtrail activity throughout the day.

At approx 10:08 am I heard what sounded like a gunshot outside and came out to investigate. I looked up and saw a strange chemical looking cloud directly over head. Seconds later I heard another explosion and looked around. In the sky I spotted a white Military jet overhead with a  small chemical like cloud behind the jet. Due to the jet being directly overhead I had trouble locating the jet in the viewfinder of my camcorder. I did manage to zoom in on the jet and capture the jet ejecting a device that exploded with a audible sound forming a chemical like cloud. In the video footage one can clearly see the jet, see and hear the ejected device explode and form the chemical like cloud.

I believe what I captured and witnessed was early testing of explosive devices containing chemicals to form man made chemical cloud cover.

Please watch the video at the end of this article (Bottom of this page) published by Maui Skywatch. These aerial Chembombs are being deployed worldwide. This is a alternate method to create artificial chemical cloud cover…

There is a distinct possibility this technology is the reason we are seeing these strange clouds and many times in the absence of chemtrailing. With other geoengineering, chemtrail and Naval Research Lab Plasma Cloud testing I have observed, I firmly believe there is numerous alternate technologies to create man made chemical like cloud cover in our skies. More to come on this subject.

Chemtrails and Geoengineering is destroying our planet. Now we have the real threat of one of these chemical explosive devices failing to detonate and falling to earth. This is a willful and wanton disregard for public safety. Just think if one of these devices explodes in a school yard filled with children, on someones home or anywhere. If this does not make you upset and willing to take a stand for what is right, I don’t know what will. It is more than obvious the people behind this agenda have no concern for human life and all living things on our planet.

Links: From “The Truth Denied”

~ Question Everything – Do your own research ~

Studies at The Truth Denied

Special thanks to Maui Skywatch for their continued research in bringing the truth to the public. Thank You.

From Chemtrails to Chembombs, Aerial Aerosol Explosions are the New Dispersion Method Worldwide

Worldwide more people are noticing and reporting on this technology of Aerial Explosive Devices to create Chemical Clouds.

Must See Video: From Youtube Channel Truth and Art Tv

Special thanks to Truth and Art Tv for posting this video and spreading the truth.

Forget Chemtrails, How to Identify the Chembombs!

Link: Also visit Geoengineering Watch for information about geoengineering, chemtrails and much more:

I sent the two exploding object videos shown below to a Weather Balloon Manufacturing Company for their opinion and should hear back in a day or two. Some have claimed these balloon type objects are ChemBombs, Orbs and even UFO’s but there is a high probability they are not. Compared to videos posted of verified weather balloon explosions these two videos look to me like, Weather Balloons Exploding. Apparently anyone can launch these balloons for scientific study, school projects and so on (Check on Restrictions In Your Area of course). I may even do this as a science project at my sons school next year.

This video will show how they launch a weather balloon with an attached payload hung from a tether. Payload containers are sometimes painted red or other bright colors. Payloads may contain cameras and other scientific testing equipment. Very interesting.

I emailed the balloon videos to a company named “Beyond 62”. The video shot by Crrow777 and other similar videos are defiantly Weather Balloons. Below is the reply to my email from “Beyond 62”. Apparently anyone can launch these weather balloons but the liability issues would be a concern.

First of all, I would not call it a balloon failure as all high altitude balloons will explode as they reach their max altitudes.

It’s how you get the payload back.
You are liable for any damages. I doubt any insurance company will cover the flight.
Questions regarding liability have been asked before and standards have been proposed to the FAA.
You can find more information here:
Straub, J., J. Nordlie, E. Anderson. 2013. A Need for Operating Standards in the Academic and Research High Altitude Balloon Community.  Issues in Avaition Law & Policy, Vol. 12, No. 3.
The flightpath is hard to foresee and you must have it in mind when you select your launch site but in my experience my payloads landed in un-populated areas and would have caused little damage.Link to “Beyond 62”
http://www.beyond62.com/
__________________________________________________________________