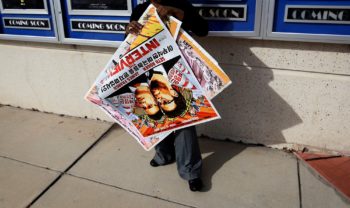 The Interview that was cancelled. If this is not irony, I don’t know what is. ~TTD

Millions of  movie goers are disappointed to hear the  latest alleged North Korean hacking into Sony Pictures emails as well as reported death threats that ensued  as a result  of  Sony’s latest controversial comedy that was to be released on December 25, 2014  called THE INTERVIEW. Sony executives shelved the movie yesterday claiming that the threats are real, and until they find the culprit of the cyber attacks, they will stand on the notion that it is in their best interest to further investigate the crimes.

SONY  does not take too kindly to President Obama’s press release regarding “Sony caving in to terrorist threats.” Obama even stated that Sony should have come to him first, before they shelved the flick.

Obama said that ” pulling the film could set a dangerous precedent.”

He further stated “We cannot have a society in which some dictators someplace can start imposing censorship here in the United States, imagine what they (will) start doing once they see a documentary that they don’t like or news reports that they don’t like.”

Obama makes a good point, we cannot cave into  the whims of terrorists, agreed. But Sony rejects the idea that they have done anything of the sort.

Sony Entertainment CEO Michael Lynton, flat out denied  that the studio had “caved” by scrapping next week’s opening of “The Interview,” and  fired back on Friday after President Obama said the studio had “made a mistake.”

Keep in mind that SONY PICTURES  spent  %44 million dollars on the movie (The Interview) and has upwards of $75 Million in future  revenue losses for axing the film on Friday, but the company stands tall and has a plan moving forward..

“We have not given in. And we have not backed down. We have always had every desire to have the American public see this movie,” Lynton said.

“Free expression should never be suppressed by threats and extortion,” the studio says in new statement after being slammed by the President

But there is a slight problem. Lynton told CNN that Sony had “a number of options open to us and we have considered those and are considering them.”

But he also said that no “major video on demand distributor” has been “willing to distribute” the film. “We don’t have that direct interface with the American public, so we need to go through an intermediary to do that.”

That’s Hollywood’s jargon for  “We don’t have an online distributor yet.” And this almost has nothing to do with hackers, Sony simply isn’t set up with this type of interface for the public.

Lynton closed with “It is still our hope that anyone who wants to see this movie will get the opportunity to do so.”

You have to wonder if this is some type of publicity stunt? And yes, you guessed it, Netflix is the obvious move for Sony.

The FBI has confirmed  that North Korea was behind last month’s cyber-attack that caused a devastating breach of Sony’s data. 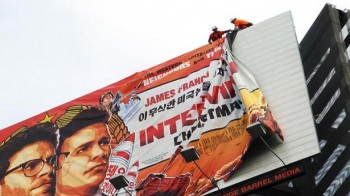 Workers remove the poster for The Interview from a billboard in Hollywood, California, Dec 18, 2014, a day after Sony announced it had no choice but to cancel the movie’s Christmas release and pull it from theatres due to a credible threat. — PHOTO: AFP – see more http://www.thetruthdenied.com/

About Sony Picture’s movie ” THE INTERVIEW”

Talk-show host Dave Skylark and his producer, Aaron Rapoport, score an interview with Kim Jong-Un, dictator of North Korea. But when the CIA asks them to kill Kim,they become the least qualified men to ever assassinate. Staring Seth Rogan and James Franco. 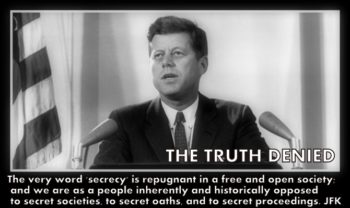 The very word ‘secrecy’ is repugnant in a free and open society; and we are as a people inherently and historically opposed to secret societies, to secret oaths, and to secret proceedings.
John F. Kennedy
READ MORE HERE : http://www.thetruthdenied.com/news/tag/john-f-kennedy/