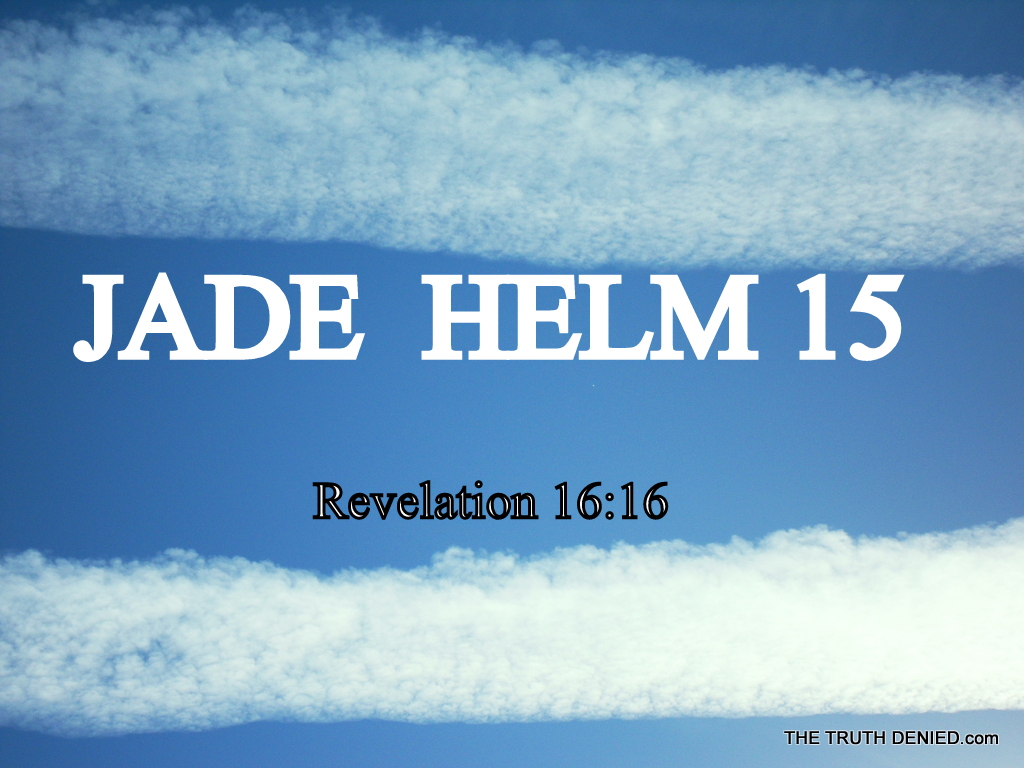 Jade Helm 15 – Circulating the internet in the past few months  are rumors of internment camps (FEMA) opening up for business, government declaring  Marshall Law, fear of losing  gun rights,land grabs….you name it! Jade Helm  has caused  panic across America. The public is  now demanding  answers from our ‘trusted’ leaders in hopes of getting answers about Jade Helm. “What the heck is going on? It’s looking like a military takeover or a Police State/Marshall Law”?  The Jade Helm exercise literally opened a can of worms in 2015, a bell that seemingly can’t be unrung. It turns out Jade Helm is real-well partially. Listen folks, it’s not a secret!  The exercise will be conducted by members of U.S. Army Special Operations Command as well as  other U.S Armed Forces units July 15 through Sept. 15 , but is this also a  False Flag Operation? (And that’s the part the military is NOT talking about.)

WHAT DOES JADE HELM MEAN in Military code?

What does the name “Jade Helm 15” actually mean?

The military acronym for JADE is – Joint Assistant for Deployment and Execution.

Helm : Military acronym for   “Helicopter Manager” and refers to  the deployment of drones and quadcopters . 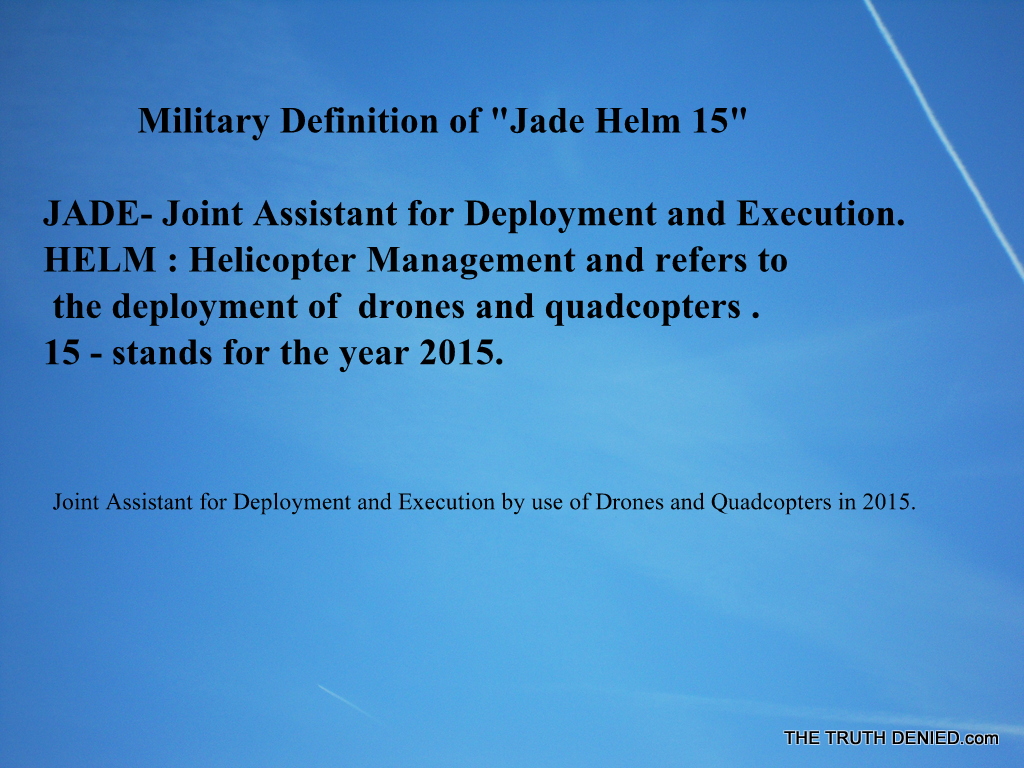 In short, a False Flag is an event orchestrated for political purposes by  either a ruling government or otherwise controlling elite. So if the exercise is real, where does the False Flag Event come in?

What does a False Flag look like? Generally speaking,  it is the deployment of a drill (in this case Jade Helm 15)  prior to or during an actual attack. In many cases, the  drill will involve the actual sequence of events that takes place during the ‘real-life attack’. In the past,there is evidence that  military drills have been present on large-scale false flags such as 9/11 , Sandy Hook, Katrina Hurricane as well as smaller scale attacks.

“While multi-state training exercises such as these are not unique to the military, the size and scope of Jade Helm sets this one apart.” –USASOC

An illustration of a false flag event was posted to a popular website known as  ACTIVIST POST (excerpt below).

“Although one reason may take precedence over the other depending on the nature and purpose of the operation, drills are used by false flag operators for at least two reasons. One such purpose is the creation of intentional confusion if the drill is taking place during the actual attack. The other, more effective aspect, however, is using the drill as a cloak to plan the attack or even “go live” when it comes time to launch the event. Even more so, it gives the individuals who are involved in the planning of the event an element of cover, especially with the military/intelligence agency’s tight chain of command structure and need-to-know basis. If a loyal military officer or intelligence agent stumbles upon the planning of the attack, that individual can always be told that what he has witnessed is nothing more than the planning of a training exercise. This deniability continues all the way through to the actual “going live” of the drill. After the completion of the false flag attack, Coincidence Theory is used to explain away the tragic results.”

The military claims the following reasons for the training exercise: 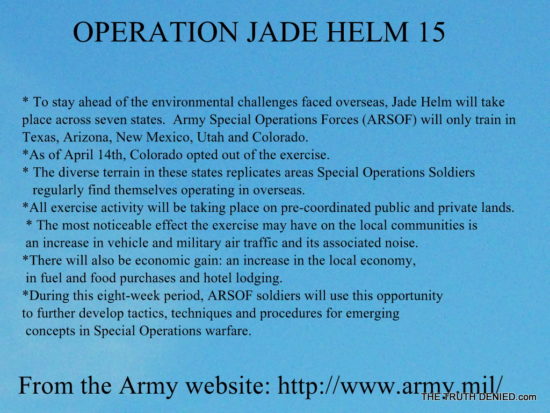 JADE HELM MANIFESTO- According to the US ARMY

In the official  Jade Helm 15 map that has been  circulated on the Internet, Texas and Utah are listed as “hostile,” along with a small section of Southern California, along the border with Mexico. Colorado is one of three states shown in blue, listed as “permissive.”  *Colorado has since  backed out of the training exercise. It is now rumored that California has backed out as well.

By  April 28, Texas Governor Greg Abbott wrote a letter to Major General Betty Gerald Jake Betty who is the commander of the  Texas State Guard   and demanded to receive updates of the 8 week training exercise as well as it’s progress, this off of the heals that some Texas residents fear is a run-up to the Obama administration declaring martial law in the Lone Star state.

Heads up ! Jade Helm 15 is not the only game in town; there are other training exercises and courses that the military is conducting that are NOT being talked about on the internet are courses such as “Blurring the line between virtual and physical reality”, and   Sgt. Anthony Brock describes it as: “The only difference between virtual reality and the world we live in is the amount of information,” said Brock. “The only reason they are different is that there is so much more to experience in the physical domain than we can currently sense and process in the virtual realm. As new sensors are created and we become able to process information faster, the gap between the two will disappear.” That’s a scary thought, now isn’t it?

During his opening remarks, Col. Scott Storey, 95th Civil Affairs Brigade (Airborne) commander, told the delegates that all countries face formidable environmental concerns, referencing the recent earthquake in Nepal and other recent weather related disasters in the Pacific region.
“Each of us has a valid reason to share our  experiences,” said Storey. “Knowing each other on a personal basis promotes how we approach problems not only in our own country but in the region as well. We are here to discuss and further develop our best practices and share with others.”

Senior leaders from 10 countries were at Fort Bragg April 28- May 5, to participate in an exchange of ideas and concepts covering civil military operations in their  own countries.

“One of the things I know to be true, however, it is not a matter of if something happens, it is a matter of when it will happen again.” ~ Col. Scott Storey, 95th Civil Affairs Brigade 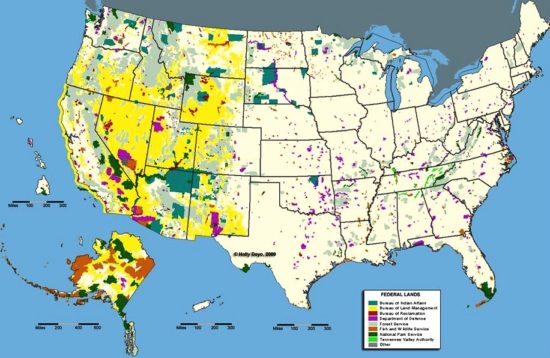 So what makes Jade Helm 15  so nerve wracking, and why is the panic quickly  escalating  from Coast to Coast? As you can see, the military has had ongoing Emergency Preparedness training camps  on virtual mapping,  NSA and security issues, warfare, riot control, catastrophic weather events, even in the case of a revolution ‘preparedness’…but Jade Help-15 is getting all of the attention.

According to reporter   Alex Jones, Talk-show host and owner of InfoWars.com,  they are preparing to “invade Texas” .  This Jade Helm is a “Trojan Horse”.

Take over the state of Texas?  No.

Trojan Horse, maybe. But why?

No presidential election in 2016? Doubtful.

Blurring the line between virtual and physical reality