Whistleblowers are generally insiders who expose corrupt, illegal ,or nontransparent activities of an organization or establishment; included in the list are military, government, and multinational corporations.. Because these employees are on the inside of  governments,  and other organizations, they can provide the general public with  either crucial leads, evidence, and in some cases even “smoking guns” that have the potential to  expose everything from financial fraud and waste to criminal conspiracies and war crimes.Since 2000, whistle-blowing has gone up over 150%. Being a whistleblower is not all that it’s hyped to be either, as in the case of  NSA Whistleblower Edward Snowden who single handedly elected to give  an estimated 200,000 documents to journalists world wide.

On February 3rd 2015, John Kiriakou was released from prison to house arrest after serving 2 years. Kiriakou is one of 8 government employees charged under the Espionage Act by the Obama administration. This includes fugitive Edward Snowden, currently living in exile in Russia. That’s more than all former administrations combined. Did it get the public’s attention yet? It got mine. 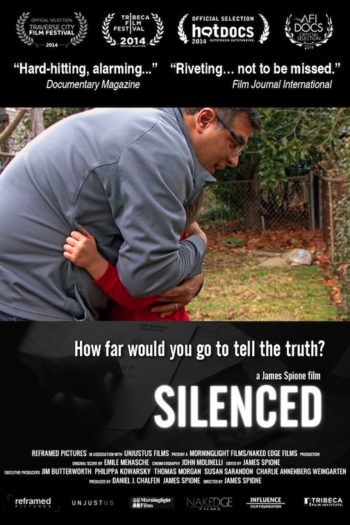 Whistleblower documentary SILENCED sheds light on government secrets  and the legal war being waged to protect these secrets. It seems that from  9/11 on there has been a STASI-state (meaning: Ministry for State Security commonly known as the Stasi)  of intelligence in the US, and the film SILENCED discusses this concern. Retired NSA executive Thomas Andrew Drake, and former DOJ Ethics Advisor Jesselyn Raddack, and director James Spione  discuss at length the common secrecies in government  and include uncensored footage from the film, directly from the 2014 Tribeca Film Fest. These brave whistle blowers are four high-profile truthtellers—Jesselyn Radack, Thomas Drake, John Kiriakou, and Peter Van Buren—who dared to question the nation’s post-9/11 national security policy and suffered harsh consequences as a result.

My take on the film:

I watched the film in its entirety a few months ago. Not only was every single moment of the film compelling, it was at times deeply disturbing & surreal. Keep in mind that I have been a journalist now for 6 years, revealing the atrocities, lies, and dissent of this once great nation that I live in known as the United States of America. The film SILENCED hits the mark and answers the more complicated questions regarding the underpinnings of the CIA and other 3 letter agencies. In short, Jesselyn Radack’s courage is similar to that of Erin Brokovich, with one exception: that Radack’s motivation was not only to save herself, but to save every single  whistleblower that  would ever walk into her office again. Whistleblowers  John Walker Lindh, Thomas Drake and John Kiriakou underwent scrutiny and threats by our government, yet they  remained courageous as it only served to cement their convictions  to share their experience with  the public. I suggest you watch the film in its entirety, and to embrace these heroes and others like them. After all, if we the people cannot stand with true patriotism, then in the end, what does that say about us as a nation? ~ Roxy Lopez of  THE TRUTH DENIED

Now also  airing on DirecTV and DirecTV On Demand in the US, on CBC in Canada,
on ARTE in France & Germany, and on NHK in Japan.

“Why a film so riveting, so revealing  and so relevant couldn’t secure a theatrical release in the country of its origin is baffling!”

More about the film SILENCED

John Kiriakou : Fromerly of the CIA

“In 2013, John Kiriakou, an ex-CIA officer, was sentenced to thirty months in prison for allegedly leaking a covert operative’s identity to a journalist, in violation of the Espionage Act of 1917, which only eleven Americans have been charged under. But is Kiriakou rightfully one of them, or is he actually just facing the consequences of a more treacherous form of authoritarian retaliation? What Spione unearths is something far darker on the part of the American government, as Kiriakou and two national security whistleblowers fight to reveal the practice of “enhanced interrogations” that has become the controversial cornerstone of the country’s war on terror.”

VICE NEWS REPORTS: John Kiriakou spent 2 years in the Federal Penitentiary for “Telling the Truth”.  Mr. Kiriakou stated ” The Government Turned Me Into a Dissident”. VICE News caught up with Kiriakou for a wide-ranging interview just a few days after he was released from prison. He detailed how his CIA training became a technique for survival behind bars, and how the government turned him into a “dissident.” Why?

Academy Award winner and an executive director of the film Susan Sarandon helped by speaking out publicly as well as  crowdfunded  for  new film SILENCED  by James Spione.

When truth and justice are no longer rewarded, it becomes an obvious black mark on the government.  Thank you to  Jesselyn  Radack, John Walker  Lindh, Thomas Drake, John Kiriakou (and all of the others) who  stood up and shared with the world the God awful truth about our government.  It is difficult to comprehend why these American patriots were treated so callously;  scorned by the media and imprisoned for doing their  jobs, the jobs they were hired to do by the US Government. These cases and others like them make a complete and udder mockery of the justice system and the constitution in which birthed The United States of America. America is no longer “the land of the free“, but the testimonies in the film Silenced proves that we are still capable of being “the home of the brave“. Stand up and be counted America, the “silent majority” is a myth. Now prove it!