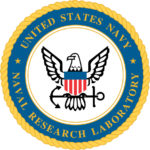 In this article, I will explain the “Naval Research Labs” (NRL’s) publicized information for the creation of Plasma Clouds, dated 02-25-2013, along with the technology used and purpose. Remember, there is far more applications / purposes to government technology than what they publish. We are told only a small fraction of information about the scientific research and technology conducted by the government and their contractors within the Military Industrial Complex. We can only connect the dots of what we witness, applying our own research to these published technologies in an effort to learn the truth of how these technologies affect our health and environment.

Note: We all need to keep an open mind to limited publicized information of advanced technologies possessed by our government and the obvious reasons for non disclosure. Are all government technologies evil? I don’t believe they are… The NRL’s Plasma Cloud technology, as we will see, does have military applications but I also believe one of it’s purposes is for “Solar Radiation Management” which I will discuss later in this article. This is only one of the numerous technologies for artificial cloud cover. Artificial and natural clouds do protect the planet from UV radiation by blocking and reflecting radiation.

The Antelope Valley California / My Backyard

Over the past four years I have done extensive research on plasma clouds, artificial cloud manufacturing, Geo-engineering, Chemtrails and the detonation of explosive devices ejected from aircraft in our skies to create chemical like cloud cover. Along with my research I have filmed numerous hours of aerial experiments conducted over the Antelope Valley, Ca. which is home to one of the larger Military Industrial Complexes.

The Antelope Valley is home to numerous military facilities along with many government contractors working within the Military Industrial Complex. Centered between Palmdale and Lancaster, Ca., on 300 acres is the USAF Plant 42 test facility along with Lockheed Skunk Works, Northrop Grumman, Boeing and the NASA Armstrong Flight Research Center. North of here just east of the town of Rosamond is Edwards AFB. Further north is the U.S. Navy’s China Lake facility. Also scattered throughout the entire area are other black budget facilities located not only on the valley floor but tucked away in the mountains and forests surrounding the valley.

Above: Map of the Antelope Valley Ca. showing location of Lockheed, USAF Plant 42, Northrop, NASA, Edwards AFB and the town of Mojave where I documented three separate plasma cloud experiments.

Below is a preview of the Plasma Cloud Technology I have documented on three separate occasions over the Antelope Valley, Ca. More details later in this article.

Later in this article I will go into more detail and will post video footage, photos and satellite imagery documented on 06-04-2012 of the creation of a extremely large plasma cloud centered over the town of Mojave, Ca. located N/W of Edwards AFB.

Keep in mind, that  when I first documented the first plasma cloud in 2012, the Naval Research Lab had not yet released their limited information about their plasma cloud technology. As a result I had absolutely no idea what type of technology I was capturing on video. It wasn’t until the 02/2013 release of the NRL’s data that I was able to connect the dots.

I am convinced the technology I captured on video was the NRL’s Plasma Cloud technology using ionospheric heaters located in the area, possibly at the China Lake Naval Base. I am also convinced they were able to manipulate the plasma cloud by injecting a chemical substance to transform this cloud into a “Cloud Generating Machine”. The wind also seemed to be manipulated. This all may sound like science fiction but connect the dots for yourself… 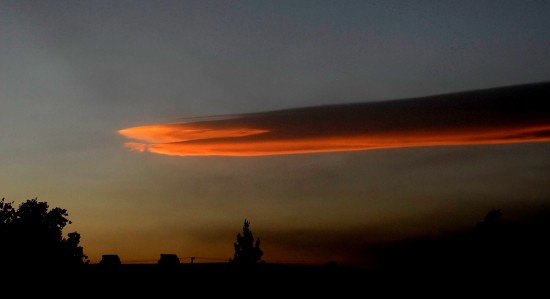 Above Photo: Plasma Cloud at sunset. Chemtrail injection had stopped. 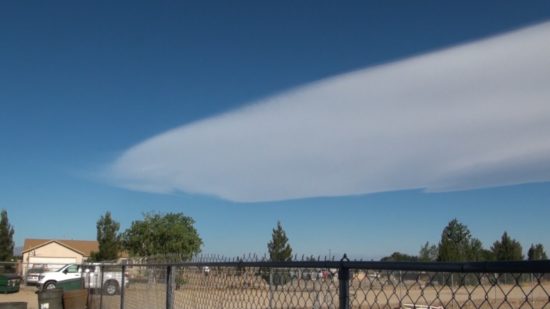 Above Photo: Massive Plasma Cloud centered over the town of Mojave, Ca. Photo taken by Jim Kerr on 06-04-2012. Note: The NRL’s plasma cloud documents were not released until 02-25-2013. When I documented this first Plasma Cloud, I had no idea what I was observing. It was after the release of the NRL data that I connected the dots.

Who is the Naval Research Lab and what is their mission? 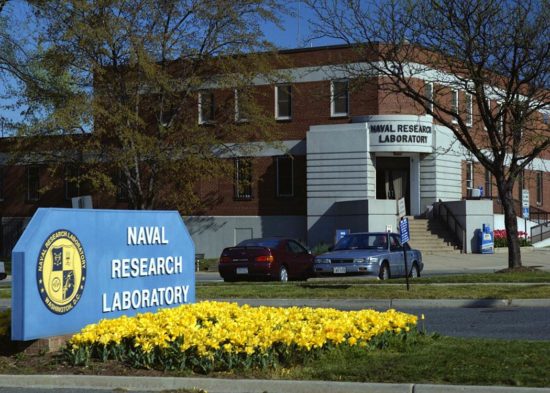 “In 1992, the Secretary of the Navy consolidated existing Navy Research, Development, Test and Evaluation Engineering facilities and Fleet Support facilities to form a corporate community. This community consists of a single corporate research laboratory (NRL) aligned with the Office of Naval Research (ONR) and four warfare-oriented centers aligned by mission with the Systems Commands. The four centers are the Naval Air Warfare Center, the Naval Command Control and Ocean Surveillance Center, the Naval Surface Warfare Center, and the Naval Undersea Warfare Center”.

“As part of the consolidation, the Naval Oceanographic and Atmospheric Research Laboratory, with locations in Stennis Space Center, Mississippi, and Monterey, California, merged with NRL to become what is today, the Navy’s corporate laboratory”.

“NRL operates as the Navy’s full-spectrum corporate laboratory, conducting a broadly based multidisciplinary program of scientific research and advanced technological development directed toward maritime applications of new and improved materials, techniques, equipment, systems and ocean, atmospheric, and space sciences and related technologies. In fulfillment of this mission, NRL”:

According to the Naval Research Lab (NRL) what is a “Plasma Cloud”, how is it created and for what purpose?

Previous artificial plasma density clouds have lifetimes of only ten minutes or less,” said Paul Bernhardt, Ph.D., NRL Space Use and Plasma Section. “This higher density plasma ‘ball’ was sustained over one hour by the HAARP transmissions and was extinguished only after termination of the HAARP radio beam.

These glow discharges in the upper atmosphere were generated as a part of the Defense Advanced Research Projects Agency (DARPA) sponsored Basic Research on Ionospheric Characteristics and Effects (BRIOCHE) campaign to explore ionospheric phenomena and its impact on communications and space weather.

Using the 3.6-megawatt high-frequency (HF) HAARP transmitter, the plasma clouds, or balls of plasma, are being studied for use as artificial mirrors at altitudes 50 kilometers below the natural ionosphere and are to be used for reflection of HF radar and communications signals.

Past attempts to produce electron density enhancements have yielded densities of 4 x 105 electrons per cubic centimeter (cm3) using HF radio transmissions near the second, third, and fourth harmonics of the electron cyclotron frequency. This frequency near 1.44 MHz is the rate that electrons gyrate around the Earth’s magnetic field.

Optical images of the artificial plasma balls show that they are turbulent with dynamically changing density structures. Electrostatic waves generated by the HAARP radio transmissions are thought to be responsible for accelerating electrons to high enough energy to produce the glow discharge in the neutral atmosphere approaching altitudes of nearly 170 kilometers.

The NRL team is working with collaborators at SRI International, University of Alaska Fairbanks, University of Florida, and BAE Systems on this project to synthesize the observations with parametric interactions theory to develop a comprehensive theory of the plasma cloud generation. The next HAARP campaign, scheduled for early 2013, will include experiments to develop denser, more stable ionization clouds”.

Lets examine the NRL and their Plasma Cloud Technology  closer.

As we have read, the U.S. Naval Research Lab is a highly advanced scientific division of the Navy that most of us have never heard of before. They work closely with numerous contractors within the Military Industrial Complex along with the Department of Defense and many other branches of the Military. I for one had no idea of their broad spectrum of scientific research and development. The following research they conduct I find most interesting:

According to the NRL’s Plasma Cloud Data published in 2013 they were only able to produce and small plasma cloud for a little over one hour. Remember this is what is publicized. They will never reveal the actual time or size of the cloud.

On the NRL’s website they have a public forum and one person made the following statement. Pay close attention to the second part of this persons comment:

“So, with HAARP, we can create high density glowing plasma to reflect HF radio emissions; that could have interesting use for the military, except that satellites are already doing this ? Unless it would be to cut an enemy’s means of communications by preventing HF emissions to reach those satellites”.

“Would that high density plasma be able to be used as a shield against space weather, say, Birkeland currents in case of a big CME ? That would require one hell of a plasma to be generated on a very large scale”…

I agree with this persons comment and have documented / videoed “one hell of a plasma cloud” on three occasions as I stated earlier in this article. My first video was a year prior to the NRL’s plasma cloud publication. There is no doubt in my mind this technology is much further advanced than stated by the NRL and capable of more applications than stated. Keep in mind what I have filmed and documented in the Antelope Valley, Ca. concerning plasma clouds is atmospheric testing, on a smaller scale that may not yet be deployed worldwide. Also keep in mind that the HAARP’s ionospheric heater is not the only one on this planet. Take the time to research the condition of Earths Ozone layer and the rising levels of UV radiation. In my opinion, Solar Radiation Management is real and rising UV radiation is a real issue. Clouds and particulates in our atmosphere do protect the planet from a damaged Ozone layer.

In part two of this article I will explain and show these massive plasma cloud in action as they emit cloud cover. In future articles I will show other technologies for generating clouds.

Soon to be published.

“The Creation of a U.S. Naval Research Lab Plasma Cloud”

A quote from a scientist I know working within the Military Industrial Complex.

“The technology we have goes beyond Science Fiction”.

Jim is a retired police officer with an extensive  background in criminal investigations. He oversees a family owned law enforcement supply business and works part time in private security along with conducting high profile criminal investigations and surveillance for a private investigation firm. In 2011, Jim took and interest in Chemtrails and began filming and documenting the skies over the Antelope Valley California in hopes of spreading awareness to this agenda. Within a short time Jim began capturing strange anomalies in the sky that appeared to have a connection to Chemtrails. Anomalies consisted of obvious man made cloud experiments connected to HAARP type technology for weather control, numerous sightings of UFO’s, signatures of cloaked craft that appear to be using anti gravity technology and seem to interact with Chemtrails. Visible disk shaped objects and orbs that have a strange attraction to Chemtrail spray and more. Jim connects with other researchers across the U.S. sharing information in search of spreading the truth.