Three hours of darkness occurred in Siberia  on July 20, 2018 in the area of the  Siberian arcticcircle last week, without any explanation whatsoever. It is now being called an unsolved mystery.  The area of the phenomenon occurred  a couple of hundred miles south of Yana Bay, the most significant bay in all of Siberia.

Witnesses said they couldn’t see anything  without switching there lights on or use of flashlights. Some people reported that  they saw  what appeared to be a  thunder storm coming in, as it got darker and darker. Clouds of  black dirt remained in the air for hours and darkness continued for nearly 3 hours.

The Siberian Times  released a new report on July 24th,  stating that theories on the 3 hours of darkness were anywhere from  “conspiracy theories of a UFO, new weapons tests, a meteorite, or pollution from wildfires”, none of which have been proven. 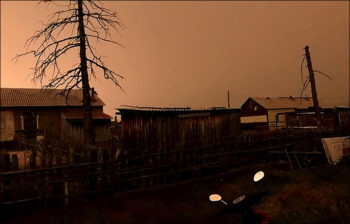 We will keep you updated as more news comes in.

For other news stories visit THE TRUTH DENIED