Copper is considered poisonous by some website. Some even suggestion copper diet. However I have strong reason why I use copper for my cemenite.

The reason why I use copper:
1. Anti baterial property
Copper has strong anti bacterial property. People usually use copper coin on top of their wound to let it cure faster. These are some study showing the benefit of copper:

Copper Proves Effective Against New E. Coli Strains in New Study
“Professor Bill Keevil, Head of the Microbiology Group and Director of the Environmental Healthcare Unit at the University of Southampton, explains: “A study looking at copper’s efficacy against new strains of E. coli has just been completed. Although it did not specifically look at O104, all the strains investigated have died rapidly on copper.”

On a dry copper surface, the study shows 10 million E. coli bacteria are eliminated within 10 minutes. On a wet copper surface, one could expect a total kill within around 45 minutes. This antimicrobial property is inherent to the metal, and shared with alloys such as brass and bronze.”

Copper kills bacteria: end of hospital-acquired infections?
“Recent scientific studies clearly showed that copper and copper-containing alloys rapidly kill bacteria, yeasts and viruses on their surface (3). This called for the re-introduction into the hospital of copper, brass, bronze, and other alloys rich in copper to create antimicrobial surfaces. The so called ‘contact killing’ on copper-containing metal surfaces is very rapid and complete. Ten to a hundred million bacteria are killed per minute, and no live microorganisms can generally be recovered from copper-containing surfaces after prolonged incubation. Over a dozen species of bacteria, yeast and viruses have been shown to be killed on copper and copper alloy surfaces. This is in stark contrast to stainless steel. On this clean-looking material, microorganisms survive for days or even weeks. They gather in microscopic scratches and are impossible to remove by standard cleaning techniques (Fig. 2).”

Copper surfaces can kill off MRSA
“They found that at room temperature MRSA persisted for up to 72 hours on stainless steel, meaning it had the potential to spread to other surfaces it came into contact with.

In comparison, yellow brass rendered the bacteria completely harmless after four and a half hours. Copper alloys were the best, destroying MRSA in as little as an hour and a half.”

US National Library of Medicine – Appl Environ Microbiol. Mar 2011 – Metallic Copper as an Antimicrobial Surface
“Bacteria, yeasts, and viruses are rapidly killed on metallic copper surfaces, and the term “contact killing” has been coined for this process. While the phenomenon was already known in ancient times, it is currently receiving renewed attention.”

This anti bacterial property can be used as solution against GMO / genetically engineered food. Some people believe that e-coli is being added to the food. Some also believe that meat and chicken also full of e-coli caused by poor production sanitation. Copper will help reduce the amount of live e-coli on fruit or meat or anything else. 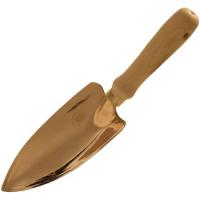 2. Copper are good for plants and lands.
Viktor Schauberger found that copper produce amazing results on plants and lands. Not only less pest or weeds, the quality and quantity of the harvest also increase significantly.

The results also verified by many people who use copper tool. At least they mention how using copper tool will reduce the number of snail that eat their plants.

Increased plants quality will reduce farmer dependance to artificial drug or genetically engineered seeds. This will reduce the need of GMO, and in turn will allow us to get healthier food.

The above point show how copper will give us good benefit. Some people may against the idea of using copper for food. However, the above show definite proof that copper can be used for good things too.