What the heck is a chem web? These are the questions that many in the USA are asking Roxy Lopez of The Truth Denied Team. Emails are pouring in asking the team about a sticky spider web- like substance that is falling from the sky, some say from “ chemtrails”. Why are they emailing Roxy?
October of 2010, Roxy received many reports and photos from Mr. Jerry Niemen regarding “fluffy white webs falling from the sky” in McCook, NE. Not knowing a whole lot of the substance, Lopez wrote Morgellons specialist and healer Caroline Carter to ask if she would test it in her lab. Ms. Carter accepted the invitation, and the web was now on its way. All evidence was documented then, and a few viral videos later, here we are again, exactly a year later.
Could this be a coincidence? We think not!

This photo was taken in Northern California, and our teams are waiting for it’s arrival, well at least part of it. 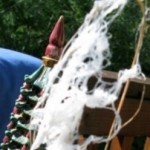 See, a year ago, the web tested positive for GMO (Genetically Modified Organisms), as well, Ms. Carter broke out in a morgellons rash that nearly killed her. Needless to say, we didn’t want to ever get near a chem web again, that is until now.

Reports coming in that  are simply just  too hard to ignore, and though they were bombarded with photos of these webs and no labs to test them in, they were still willing to reach out to others for some help.   Within a week of conversations between Roxy  Lopez and Caroline Carter, she  said she is willing to test webs  as well.

So this time around, we will be testing the webs for more than Morgellons Disease and GMO. We have some ideas, and we will share them with you as soon as we have the evidence.

So far, we have a few people in a scientific think tank running with ideas. We will begin writing articles as to what these conversations are about as well and fill you in on all chem web data.

We do however need your help.
Watch the video and contact us if you see a web, as well, help us out by contributing comments to this article. If you can photograph webs, please do and send them in, we are preparing a countrywide data base.

You can help us just by emailing in your reports with your photos.