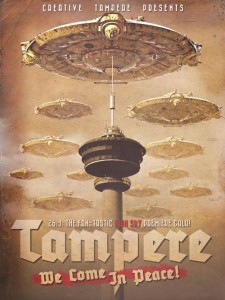 In theaters on 4th of April.

I will say this much, I have seen at least 3 films in the past 9 months that blast the Russians for being  on the moon. Now it’s a crack at the NAZI’s. In this flick, apparently the NAZI’s have taken up  residency on the moon and plan on invading earth!

Participate in the making of Iron Sky at Wreck A Movie, the communal moviemaking site. Check out the open tasks and give your shot!

Show the distributors of this film your support, and bring the film to your neighborhood by click here : http://www.ironsky.net/site/support/how-to-support/

We add movie reviews a couple of times a month, as well as suggested movies to see. All material posters and Trailers owned by  the makers of this film. Copyrights apply.

If you happen to see the film next month, don’t forget to vote!

***   I wouldn’t see it again, but was pretty entertaining

Give us your rating after you see the flick, and The Truth Denied will post the results!