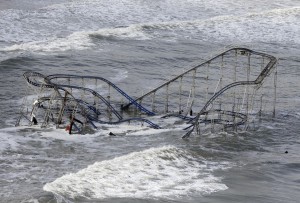 Watch the clip, Police Chief Thomas Boyd says mandatory evacuations are necessary, and most residents will not be able to return to there homes for possibly 6 months. Many are questioning, “Is this Martial Law“? Is this action really to “protect the residents”, or a true evacuation with buses and trains set up by law enforcement a form of Marshall Law set up by FEMA?

According to a recent report today, there are 14,210 residential properties on the barrier island stretching south from the northern border of Mantoloking with a combined assessed value of $9.8 billion; also  377 commercial properties, with an assessed value of $505 million, all needing to be evacuated.. This does not include the 5,240 parcels at this time.

“We know people are there, we’re keeping an eye on them, and they need to stay on their property. If they come off their property to come off the island, then they don’t get back on. It’ll be a while before anybody gets back on the island until we make it safe,” Toms River Police Chief Mike Mastronardy said.

“That’s upsetting to homeowners who’ve only seen their barrier island from aerial shots.

The pictures are devastating and they are desperate to find out if their houses are still standing.” NORA MUCHANIC

“Residents are being forcibly evacuated tonight from seven Ocean County communities because of extensive repairs needed after the devastation Hurricane Sandy left behind, Seaside Height Police Chief Thomas Boyd said.Authorities told residents they may not be able to return home for months.“It’s looking bad. It’s a catastrophe,” Boyd said.

The towns affected are Seaside Heights, Seaside Park, island sections of Berkeley Township, South Seaside Park, Lavallette, Ortley Beach and Mantoloking. The decision followed an afternoon meeting among the chiefs of police in the affected communities and other county authorities.

Busloads of people were being escorted out, with several residents interviewed saying police and fire officials knocked on their doors, telling them they had five minutes to pack a bag before they had to leave.

Many are questioning, “Is this Martial Law“? Seaside Heights is under Martial Law, but is this a bad thing? Watch the report here:
Here are what some of the residents have said in public forums:
“My family has owned property in Seaside since the early 1900’s. Many storms and fires have occurred over the years, some appearing to devastate the town. It has endured. While it is completely understandable that the island is uninhabitable until the infrastructure can be rebuilt, it is incomprehensible that property owners will be denied access  to their properties to at least clear them of saturated mold causing furniture, carpet, clothing or other belongings. For some of Seaside, especially the southern part protected by the boardwalk and stands, water damage is the main issue. This can be addressed with minor effort as long as mold doesn’t have time to make a perfectly good residence unsalvagable. Since the gas has been shut off to the island as well as other utilities, what danger exists for homeowners to visit, not remain at or even repair, their properties? We just need to stabilize our houses to avoid any further damage.”
Another forum participant  states:
“This particular story hasn’t yet gotten the attention it deserves since it was buried overnight. Read it carefully since you will not see other than a star chamber of local police chiefs making this unilateral edict. I invite the chief to define those two words. When we leave emergency management policy in the hands of rigid thinkers we get this and it should frighten reasonable people. This edict is currently being enforced. Now let’s click off together what questions we may have:space Where is the Governor on this. Where is his bold, take no prisoners leadership?
Where is the state declaration of threat to the health and safety of the population there?
Where is the pre-planned accommodation of the evacuees?
Or in Katrina-like terms where are the trailers set up perhaps at Great Adventure to provide for what is termed an unknown time period.
We excoriated a sitting president who was more hampered by the actions of outright idiots than his command of the situation and a fourth estate who willed his incompetence.
The President alights in Brigantine and with the Governor issues a few video worthy hugs to the unhinged.
Mark this well citizens there is no longer private property or the right to self determination and it was posted here at 1AM so you could not see it.
But there it is.”

I am very sure other towns have had martial law in the aftermath of hurricanes or other natural disasters. Why is it such a big deal ?”