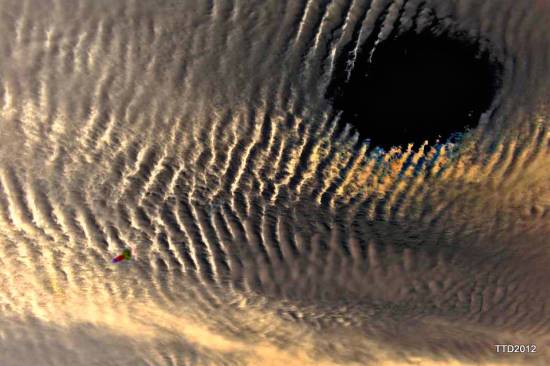 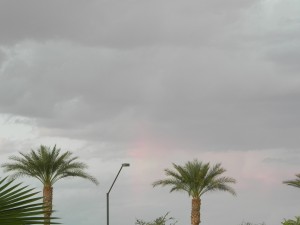 In general, it seems that most of the general public cannot deny that something is up with the weather. Not only have our blue skies turned gray, they are being littered with giant plumes of what appears to most individuals as jet exhaust. The public has become aware of the weather patterns that have become more and more extreme in the past decades and natural disasters such as earthquakes, volcanic activity, & super-storms seem to be escalating throughout the globe. These extreme weather events are now being depicted as the ‘norm’. We ask the question, WHY?

BBC Two – Horizon, 2011-2012 Episode 12 of 15: Global Weirding
“In the past few years we have shivered through two record-breaking cold winters and parts of the country have experienced intense droughts and torrential floods. It is a pattern that appears to be playing out across the globe. Hurricane chasers are recording bigger storms and in Texas, record-breaking rain has been followed by record-breaking drought.”

Extreme Weather of Last Decade Part of Larger Pattern Linked to Global Warming
“In 2011 alone, the US was hit by 14 extreme weather events which caused damages exceeding one billion dollars each — in several states the months of January to October were the wettest ever recorded. Japan also registered record rainfalls, while the Yangtze river basin in China suffered a record drought. Similar record-breaking events occurred also in previous years. In 2010, Western Russia experienced the hottest summer in centuries, while in Pakistan and Australia record-breaking amounts of rain fell. 2003 saw Europe´s hottest summer in at least half a millennium. And in 2002, the weather station of Zinnwald-Georgenfeld measured more rain in one day than ever before recorded anywhere in Germany — what followed was the worst flooding of the Elbe river for centuries.” 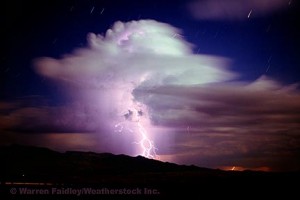 If you notice , there has been many an article attributing this more extreme weather with terms like ” Global Warming” or now more recently “Climate Change” . If these weather patterns are being blamed on global warming, then current efforts to reduce CO2 emission is a failure, or worse, it becomes a trigger of accelerated global warming. So what is the point? We know that many nations have committed to a joint effort to reduce carbon emissions for the last decade, if not longer. The fact is, even when this joint effort required many sacrifices among ordinary people, the results of these efforts was nil. That’s right, nothing!

Therefore we beg the question, are CO-2 emissions really the culprit, and if not, what is?

What about those contrails in the skies? . Contrails have been known to induce regional warming. Much of the  scientific data & articles out there are reporting  that we should attempt to  prevent the formation of these contrails. Unfortunately, the government turns a blind eye and a deaf ear when it comes to this discussion, and we again need to ask , WHY?

Read this article below for more information:
Global warming: blaming the basic thing being living, ignoring the more visible one

Here is yet another possibility of extreme weather due to contrails lingering particles that seem to be saturating our atmosphere. Do you realize that these  visible contrails not only mean excessive vapor cloud formations, but this vapor holds the nano particulates in place .  These particles have in the past and will likely continue to do damage to everything in nature in our future.

See this article below for more info:
More sulphate in the skies means more chemtrails
Why is it bad for sulfur dioxide to linger in the atmosphere?

Natural disasters have definitely become record breaking this last decade, so I find this statement to be very strange, by Dane Wigington, on Madison Ruppert – “End the Lie Radio” :
01:50:42 “Our best hope lies in allowing the planet to react to the damage that’s been done to it on its own. Right now that is being completely hampered. from top to bottom. There would be very violent weather, the spraying tends to die down, dumb down the weather. you see this massive spraying on the pacific northwest coast, in the eastern of pacific ocean, that kills most of the storm cyclonic rotation”

Affiliated with geoengineeringwatch.com, Dane Wigington features prominently in Why the in the World are They Spraying by Michael Murphy along with the previous film, What in the World are They Spraying. The above statement is the opposite of what many people witness. Millions of people on the social media sight known as FACEBOOK have repeatedly testified via photo images and there own daily reporting that their weather become worse after a heavy chemtrails spraying. So what gives? Ponder that one for a while!

I also found that by neutralizing chemtrails, I can achieve better weather. Yes, I know it is hard to believe, and so many make these claims, but listen up. I have used cemenite for about one and a half year now, and my local weather improves immediately after the use of cemenite. Rain has become periodic as well as gentle, it rain almost everyday, there is less lightning, less tornado, less flooding and more glowing blue sky filled with fluffy low altitude clouds. For the record I do not sell this product but I can teach you how to make it.

Unfortunately, my finding is the opposite of Dane Wigington’s statement below:

01:51:18 “There would be violent weather when they stop this program, but, that is the planet responding the damage done, more rain, rains that’s ladden with carbon, that will figurate the forest floor instead of decimating it, we have the planet method of rejuvenating the ozone layer, you know, the stronger the storm”

I highly believe that the weather would be better when they stop the spraying program. 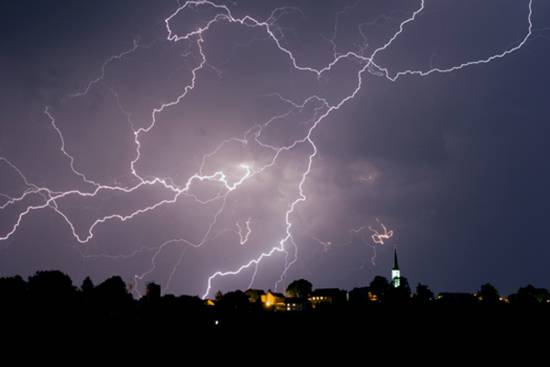 I once believe that people who improve the environment with orgonite also aim to improve the weather, but to my surprise, it isn’t so. To reach their goal, to make trails dissipate faster, some actually willing to make the weather worse: 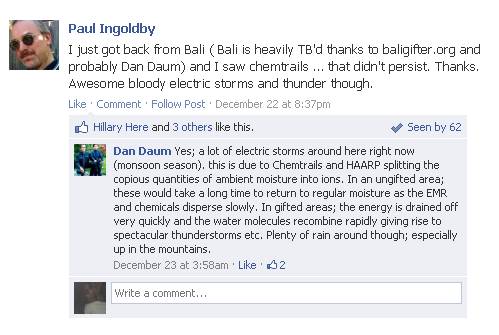 Paul Ingoldby:
I just got back from Bali ( Bali is heavily TB’d thanks to baligifter.org and probably Dan Daum) and I saw chemtrails … that didn’t persist. Thanks. Awesome bloody electric storms and thunder though.

Dan Daum:
Yes; a lot of electric storms around here right now (monsoon season). this is due to Chemtrails and HAARP splitting the copious quantities of ambient moisture into ions. In an ungifted area; these would take a long time to return to regular moisture as the EMR and chemicals disperse slowly. In gifted areas; the energy is drained off very quickly and the water molecules recombine rapidly giving rise to spectacular thunderstorms etc. Plenty of rain around though; especially up in the mountains.”

I believe that calming the weather is more important than making trails dissipate faster, but I found that most trails in my location do not last long at the same time I experience better weather. Lightning and storm is something rare here. Not all gifting produces a spectacular thunderstorm. And I believe it is wrong to make the weather more violent than it already is right now.

There is a side to science that stubbornly clings to it’s carbon warming theory, ignoring the influence and relationship between of the contrails and the weather.

Geoengineers believe the contrails help calm the weather and calm the global warming. This is a LIE !

There is an opinion that states that chemtrails are the source of our extreme weather conditions and therefor reducing these chemtrails will in turn create better weather. This is my understanding at the moment, therefor I do subscribe to the efforts to rid ourselves of chemtrails, geoengineering artificial weather, etc. would be the key to restoring our weather to natural patterns .

If you wish to discuss this further with the author, please send the name of this article in a subject line of your email, send to info@thetruthdenied.com. OR Simply make a comment to this post, and one of our team members will answer it.