It all began with an email we received on March 6th, 2013 from Author, Patrick  Jordon who has been a previous guest on THE TRUTH DENIED TALK RADIO. He sent an email alert to his private news group asking “Can somebody fact check this?” followed by “I am so worn down with false predictions that circulate the net.”

The story that Patrick Jordon requested a FACT CHECK on was a new press release by the Fellowship of Minds Blog out of  Tucson, Arizona with headlines that read “Tucson declares state of emergency & effective martial law”. Well this caught my attention right away, and I decided to FACT CHECK the story and found it to be absolutely true, yet the announcement has not been made in local or National Press.(check the original story here: http://fellowshipofminds.wordpress.com/2013/03/06/tucson-declares-state-of-emergency-effective-martial-law/#respond)

“Now therefore be it resolved by the mayor and council of the City of Tucson, as follows:

SECTION 1. That the City of Tucson Mayor and Council hereby recognizes and supports the missions and long term viability of Davis-Monthan Air Force Base and the leadership of  Monthan to make the appropriate decisions when balancing National Security andcommunity needs when it comes to their existing and future military mission and assignments.”

“In other words, the resolution gives no say to the people of Tucson or their supposed representatives in the city government, but instead “the City of Tucson Mayor and Council” is leaving the decisions that may impact the city’s “community needs” entirely to “the leadership” of Davis-Monthan Air Force Base. In so doing, the City of Tucson Mayor and Council are ceding their authority to the military authority — “the leadership” of a U.S. Air Force base.” ( See more on this story here: http://fellowshipofminds.wordpress.com/2013/03/06/tucson-declares-state-of-emergency-effective-martial-law/#respond)

“Despite Tucson not being in a natural disaster, nor are its citizens in imminent danger, Resolution No. 22006 declares a state of emergency for the sole purpose of making the ceding of civil authority to the military authority at Davis-Monthan Air Force to be effective immediately.”

Tucson is  officially under martial law ! Is this legal?

The following is courtesy  of http://fellowshipofminds.wordpress.com. because you cannotmake a  COPY this resolution via the governments website, so Fellowship Minds created a screen shot the  #22006 for it’s readers. 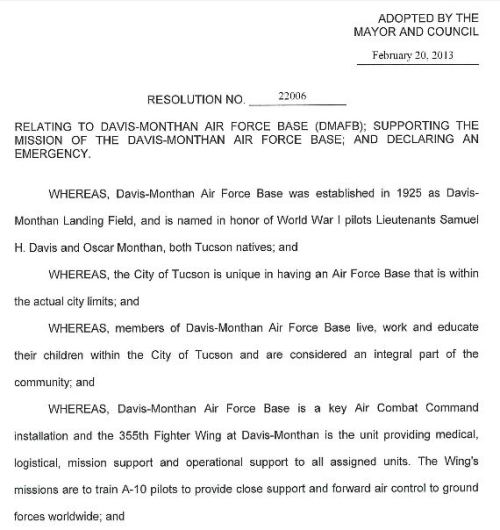 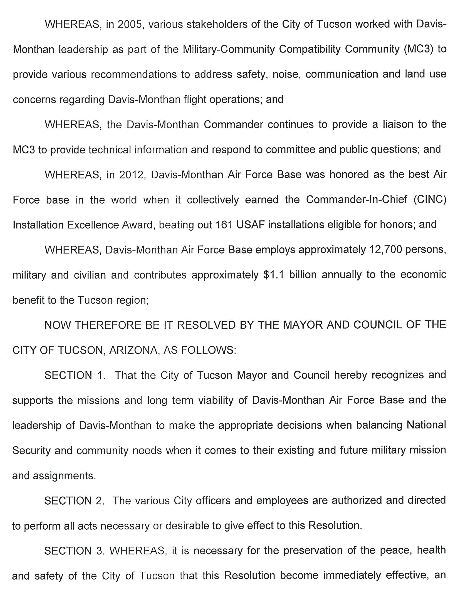 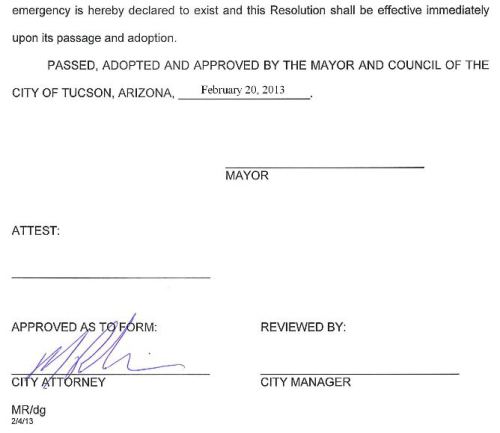 The Fellowship Minds also reported on March 13, 2013 that “The link to Resolution no. 22006 no longer works. So I went looking for an explanation on the Tucson city government website and found this:

“City Attorney Mike Rankin spoke with the media, as well as multiple individual requestors, in response to inquiries about the effect of the Mayor and Council approval of the Resolution in support of DMAFB, approved on February 20. Mike explained that the Resolution is an expression of support for DMAFB and its leadership. It doesn’t approve any agreement, or action, and it does not give any authority to DM that it doesn’t otherwise have. Mike also answered questions about the emergency clause, and explained that the emergency clause makes the resolution go into effect immediately; without the emergency clause, ordinances and resolutions do not go into effect for 30 days and publication in the newspaper. The emergency clause does NOT equate to a declaration that the City is in a state of emergency, or that it has been placed under martial law.”

So did  Mike Rankin essentially convey to the public that resolution no. 22006′s declaration of a state of emergency doesn’t really  exist? If that is the case, what is he smoking?  Look, the military in is charge! The mayor and city council previously announced that  they have complete confidence in any decision/policy made by the Air Force Base’s — even those that impact “community needs” — doesn’t really mean martial law.

What the Government is not saying: 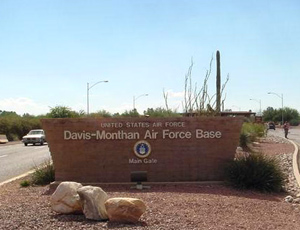 For those of you who are unaware, Davis-Monthan Air Force Base is located in Tuscon and home to Drone testing.

For more information on the base, it’s location and it’s uses, please visit http://www.dm.af.mil/library/newcomers.asp

Connect the Dots, shall we?

President Barack Obama  recently revealed to the American people that he has  the authority to use an unmanned drone strike to kill US citizens on American soil!

Eric Holder  has argued that “using lethal military force against an American in his home country would be legal and justified in an “extraordinary circumstance” comparable to the September 11 terrorist attacks.”

Is it possible that the military is going to begin first by  implementing  Martial Law  in and close to ALL Military bases throughout  the USA?  Other states reporting Martial Law as of today’s date are : Connecticut, Rhode Island and Massachusetts — all issue emergency declarations, restricting travel. Why isn’t anyone questioning this ?

In the passed 16 months, the USA has become more of a POLICE STATE than any of us care to remember !

*Note: Click on ANY of the following headings to read the FULL story on each!

Seems like the writing is on the walls folks!  We need to oppose these laws as we see fit. Please leave a comment below the article.
Solutions presented have been to appeal to the courts and local government, as well as get these laws off the books for good by REPEALING them. What are your ideas?
~The Truth Denied Staff Writer