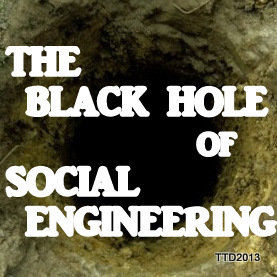 Definition: A group mind, hive mind or group ego in science fiction is a single, collective consciousness or intelligence occupying many bodies or entities. Its use in literature goes back at least as far as Olaf Stapleton’s science fiction novel Last and First Men (1930). A group mind might be formed by telepathy, by adding brain-to-brain communication to ordinary individuals, or by some unspecified means. This term may be used interchangeably with “hive mind”. A hive mind is a group mind with almost complete loss (or lack) of individual identity; most fictional group minds are hives. The concept of the group or hive mind is an intelligent version of real-life super- organisms such as ant or bee nests, and consequently, insectoid aliens such as Zerg and Ceph often have such a mind.

Social engineering, in the context of security, is understood to mean the art of manipulating people into performing actions or divulging confidential information. This is a type of confidence trick for the purpose of information gathering, fraud, or computer system access. It differs from traditional cons in that often the attack is often a mere step in a more complex fraud.

“Social engineering” as an act of psychological manipulation had previously been associated with the social sciences, but its usage has caught on among computer professionals.

All social engineering techniques are based on specific attributes of human decision-making known as cognitive biases. These biases, sometimes called “bugs in the human hardware,” are exploited in various combinations to create attack techniques, some of which are listed here:

California police departments investigating red light violations More than 30 California police departments mail out fake red light camera “tickets,” also called “Snitch Tickets,” in an effort to bluff registered owners into revealing the identity of the person who was driving the vehicle at the time of the alleged violation. Because these “tickets” have not been filed at court, they carry no legal weight and (in the US) the registered owner has the right to remain silent and is under no obligation to respond in any manner. In California, a genuine ticket will bear the name and address of the local branch of the Superior Court and direct the recipient to contact that Court, while a fake “ticket” generated by the police will not Kevin Mitnick

Reformed computer criminal and later security consultant Kevin Mitnick points out that it is much easier to trick someone into giving a password for a system than to spend the effort to crack into the system.

Brothers Ramy, Muzher, and Shadde Badir—all of whom were blind from birth—managed to set up an extensive phone and computer fraud scheme in Israel in the 1990s using social engineering, voice impersonation, and Braille-display computers.

The white hat hacker, computer security consultant, and writer for Phrack Magazine, Archangel (nicknamed “The Greatest Social Engineer of All Time”) has demonstrated social engineering techniques to gain everything from passwords to pizza to automobiles to airline tickets.

Security Consultant for Secure Network Technologies. Inventor of the USB thumb drive test where USB sticks contained exploits to test if employees would run them from within their business environments. This attack is now one of the most popular social engineering techniques in existence and is used to test the human element of security around the world.

Principal Consultant for Bancsec, Inc., and one of the world’s top experts in banking cybersecurity, developed and proved in over 50 U.S. bank locations “the most efficient social engineering attack in history.” This attack vector, primarily utilizing email, allows a social engineer to make unauthenticated, unauthorized, large cash withdrawals from bank branches [24] with an extraordinarily high success rate (over 90%) while enjoying low probabilities of immediate detection or subsequent incarceration. Among his other successful bank social engineering test accomplishments is wire transfer through a combination of emails and telephone pretexting.

Security consultant for IOActive, published author, and speaker. Emphasizes techniques and tactics for social engineering cold calling. Became notable after his talks where he would play recorded calls and explain his thought process on what he was doing to get passwords through the phone

2. Does being stressed out and overly busy equate to SUCCESS?

3. USE of  EXAMPLES : Making lists that we cannot possibly keep up  with in our daily lives, just to appear successful.

4. Going against the flow: Use of examples (i.e. red light/green light, when it rains it pours…)

5. Industrial Revolution Glamorized: Responsible for breaking up the family unit, causing competitiveness in all areas instead of unity and working with others collectively

6. Losing our identity because we became our SCHEDULE, our CARREER, (i.e. “What do you do for a living?”, instead of “who are you?”

7. The Illusion of Popularity &  Success:  (i.e. being unavailable giving off the illusion that you must be someone important, brand marketing schemes that we all buy into, literally, trends, Paul Mitchel an example of good marketing along with good business, one of the good guys.)

On July 18, 1988, Paul Mitchell was diagnosed with pancreatic cancer. He died in 1989 in Cedars Sinai Medical Center as a result of liver and pancreatic cancer leaving behind his son Angus, fiancee Millie and mother Jenny. He is buried on his estate on the Big Island of Hawaii. His son, Angus has carried on his father’s legacy of John Paul Mitchell Systems & Schools (along with John Paul DeJoria) and creating his own salon, Angus M in Beverly Hills, CA.

8. Change your TO DO LIST to GOALS (a great contribution by Bernard Alvarez)

9. We have to be the ones to BREAK OUR OWN mold, break our own LIMITING Belief System

10.  Has social media actually prevented us or limited us from being SOCIAL? Are Social Media sites dangerous for us?

11. STRESS:  Do you have it?  http://www.examiner.com/article/unhealthy-stress-the-number-one-killer

Good stress may create emotional feelings of wellness. For example, the stress a law student experiences when studying may result in a strong sense of accomplishment when he or she passes the bar exam and is able to start a career as a lawyer. The fulfillment brought by good stress may also be experienced on one’s wedding day or when completing something challenging yet rewarding. For instance, an actor may experience stage fright and have accompanying feelings of stress such as the butterflies in the stomach sensation, sweaty palms and a rapid heartbeat, yet after the performance may feel wonderful at having overcome his/her fear enough to finish the play.

We intend that this program is a beginning to awareness for each and everyone of us, to make the changes necessary  in order to live a more healthy and prosperous life. If you have any questions about this episode, please feel free to post your comments beneath this article, we are happy to reply.

Bernard Alvarez is an author as well as  the Owner of  The Spiritual Activist Network. Empowering the Human Experience http://theGIC.org/

Bernard is also a weekly host of  The Just Bernard Show on Revolution Radio 12 PM – 2 PM EST. every Tuesday. http://www.freedomslips.com/schedule.htm

2 thoughts on “Social Engineering and how it affects you!”