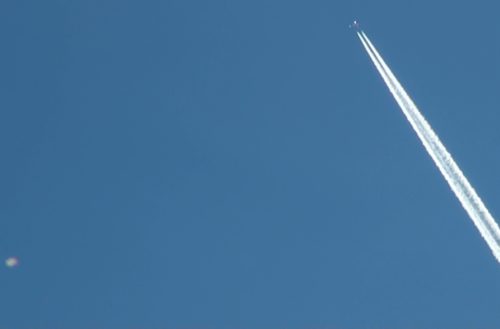 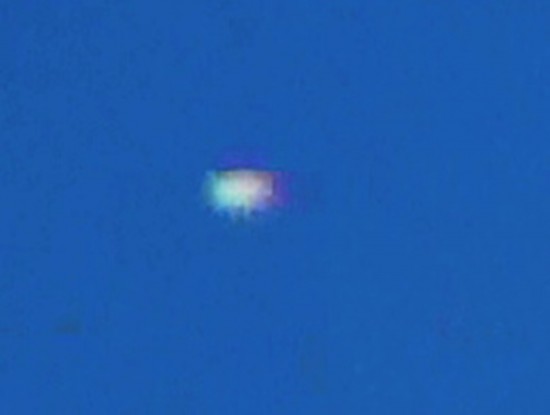 The above photo is a still removed from the video posted in this article. This UFO buzzed the chemtrail jet for unknown reasons. The photo was cropped and enlarged with the color darkened.

All I wanted to do was document chemtrails and do my part in exposing the chemtrail agenda. I have never considered myself a ufologist. These UFO’s simply got in the way of my camera lens…

Worldwide since the 1940’s people have been capturing movie film, video and photos of UFO’s in our skies. Sightings have been documented as far back as 1460 B.C., many of which are very similar to current day sightings. If you have the opportunity, a excellent book to read is, “Wonders In The Sky” written by Jacques Vallee and Chris Aubeck. This book lists 500 sightings from 1460 B.C. to 1879 A.D plus more information. Of course the majority of captures since the 1940’s are contrived, fakes and current day hoaxers use Photoshop and other programs to pull off some of the most convincing fraudulent photos and videos. Lets say 10% of all sightings are real and can not be explained as swamp gas, weather balloons, other anomalies or contrived explanations. If this small percentage are real highly advanced UFO’s with anti gravity capabilities that can attain speeds of 10,000 + mph in our atmosphere, what on earth are we dealing with?

Back in the summer of 1970 I witnessed my first sighting of a UFO that looked very similar to the UFO posted in this article and other recent captures. A friend and I had driven to Santa Monica Beach around midnight and were sitting on the ramp of a lifeguard station hanging out and talking. After a hour or so the conversation changed to UFO’s and extraterrestrials. I don’t know why the conservation went in that direction as neither of us were into ufology or even had a remote interest in the subject. After 10 minutes of conversation we witnessed a glowing white oval object traveling north over the bay. The object was casting no light or glow but was a light within itself similar to a white cardboard cutout. The object stopped and hovered approx 500 feet in altitude approx 1/2 mile from the shore directly in front of us.. We were speechless and continued to watch the object for approx 5 minutes. Suddenly the UFO shot upward into the atmosphere and vanished in the blink of an eye. Within 15 minutes three Air Force fighter jets were over the water patrolled the area where the object had been. After this incident I still really had no interest in ufology and simply figured God must have created other life forms on other planets and hopefully they were friendly. My theories have changed since my sighting in 1973.

In 2011 shortly after I began documenting and filming chemtrails, I began to capture these UFO’s buzzing chemtrail jets, interacting with chemtrail spray and at times hovering in and around cloud formations formed due to chemtrails. The first time I captured this, I explained what I had captured to my wife and adult children. I told them it looked like a feeding frenzy in the sky. Of course my family had thought I had lost my mind until I burned a DVD and played it for them on the living room big screen. Opinions of my mental health status instantly changed.

Like I stated, all I wanted to do was document chemtrails and do my part in exposing the chemtrail agenda. I have never considered myself a ufologist. These UFO’s simply got in the way of my camera lens…

I am not alone in capturing these UFO’s. Worldwide people are posting video and photos of UFO’s interacting with chemtrails and the jets spraying them. There are numerous theories as to the origin of these UFO’s. Theories from extraterrestrial, trans dimensional, Fallen Angels, God’s Angels and the demonic realm of the occult. There is also speculation these are top secrete black project government craft or drones to monitor chemtrail activity associated with weather manipulation. In today’s world anything is possible. Based on my observations of these craft and research of the history of UFO sightings dating back to 1460 B.C., Biblical research, other ancient text, military involvement in flying disks, and much more, I have formed the following opinion. There is so much UFO activity in our skies and multiple players, it is almost impossible to discern who is who. I believe some of what we see is military technology. Possibly reversed engineered craft. Much of what we see is trans dimensional, demonic in nature and have been entering in and out of our dimension for countless thousands of years. I don’t believe this particular class of UFO associated with chemtrails is of military origin. There may be military drones associated with chemtrails but these UFO’s don’t fall into that class. I believe the UFO depicted in this article and others I have filmed are trans dimensional in nature and the questions is, are they malevolent or benevolent? Why they have a interest in chemtrails is only speculation and the answer is unknown. Chemtrails are real and so are the UFO’s that have a strange interest in chemtrails. There is simply too much worldwide video evidence to debunk these events.

More to come on this topic in future articles.

Thank you for visiting “The Truth Denied”. 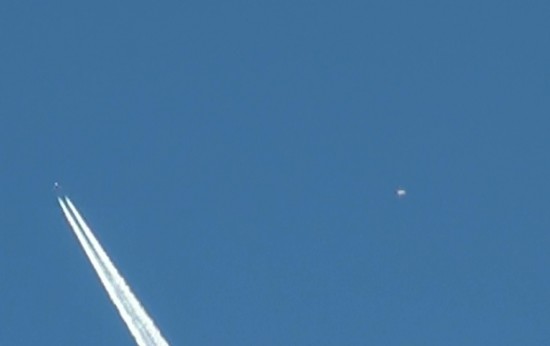 Video Footage / UFO’s and their strange attraction to CHEMTRAILS: 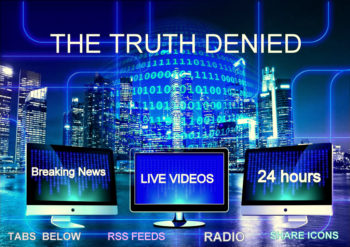 3 Responses “UFO’s and Their Strange Attraction to Chemtrails. What on Earth is the Connection?”