2014 has been a busy year for the Russian Air Force. Putin seems to be fixated on provoking allied NATO countries. Even though we are nearly half a century beyond the Cold War with the former Soviet Union, the idea of Russian aircraft with nuclear weapon capabilities entering air spaces in the U.S., U.K., raises some important questions. What is Russia doing carrying out so many military exercises over NATO countries? Why do they feel the need to engage in these training activities? These Russian “practice runs” are exactly that – practice; and as in any team sport, teams practice for the game. However, the “game” that Russia is practicing for isn’t football – it’s thermonuclear war. It’s common knowledge that Russia has one of the largest stockpiles of nuclear weapons on Earth. Just over the past couple of weeks in the U.K., the RAF intercepted several Russian Tupolev Tu-95’s; also called the “Bear Bomber”, which were heading directly towards U.K airspace. These Tu-95’s are one of Russia’s standard nuclear bombers. On Friday, Oct 31, the RAF scrambled several Typhoon fighter jets from an RAF base in Lossiemouth in Scotland, to intercept and escort several of these Russian bombers, through U.K. airspace. Only two days earlier, on Wednesday the 29th,  two Russian Tu 95’s were tracked by NATO air defenses over the Black Sea and Atlantic Ocean, preforming “significant military maneuvers”. Also on Wednesday the 29th, another group of up to eight Russian aircraft were intercepted over the Norwegian Sea by NATO F-16 fighter jets scrambled from a base in Norway. NATO has since released a statement warning of an ”unusual increase in Russian military aircraft in European airspace.

“Nuclear warfare (sometimes atomic warfare or thermonuclear warfare) is a military conflict or political strategy in which nuclear weaponry is used to inflict damage on the enemy.”     ~ WIKI

In the United States on June 4, 2014 four Russian Tu-95 bombers and an aerial refueling tanker flew within 50 miles of the California coastline. They were intercepted by U.S. F-22 fighter jets. On June 12, 2014, U.S. fighter jets once again intercepted Russian bombers off the coasts of Alaska and California. Adding to this string of Russian military flights entering controlled allied airspace, earlier this year an American F-15 was scrambled to intercept Russian bombers off the Coast of Guam. Guam is a host to America’s Andersen AFB. Andersen AFB is known to house B-52 bombers, as well as several American B-2 Stealth bombers, both with nuclear payload delivery capabilities. Allied NATO defense forces have been tracking significant increases in Russian aerial and also naval activities near Japan and the Korean Peninsula as well.  In April of 2014, a Russian fighter jet flew within 100 feet of a U.S. fighter jet, and preformed a maneuver in a way to clearly make it visible to the U.S. fighter jet pilot that the Russian fighter was armed with live missiles. In the same month, Russian fighter jets made very low altitude fly-by’s over the USS Donald Cook; a U.S. Navy missile defense ship in the Black Sea. And yet again in the same month, allied F-16 fighter jets were scrambled from the Netherlands to intercept a group of Russian aircraft, which continued a flight path just north of Scotland. Additionally, Russia has been testing long range missiles which are capable of delivering a nuclear payload over 5,000 miles.

Although there may not currently be a direct threat of a nuclear war, the actions of the Russian military seem ominous in a sense. Assuming that the world elite may possibly have the proposed safe havens – on Earth and possibly even in a destination not even on this planet; and assuming that the elite do have an agenda to significantly reduce the world’s population, it’s actually a perceivable fear. However, for now, let’s just assume that the elite probably don’t even have a fraction of the things that conspiracy theorists claim they have. In that case, there would be no threat of a nuclear holocaust in the foreseeable future. Perhaps the most unsettling issue is that the power to destroy the entire planet in minutes rests within the hands of a very small and select group of people; whom are generally perceived to be psychopaths. This is an issue that needs far more attention. The job of every citizen who lives in a free country is to hold their elected leaders accountable, and also to make sure that they government does not gain more power than the citizens. In this respect we are failing. Voice your concerns about nuclear weapons to your elected officials and representatives. Tell them that you will not tolerate even the consideration of any country to engage in nuclear warfare, nor will you allow any country to make threats of nuclear war. We are allowing a handful of people to control the most destructive weapons known to mankind. The biggest fear of any corrupt or tyrannical government is that the masses finally catch on to their unjust and inhuman ideals. We are 7 billion strong and our strongest weapons are keyboards and paper; and you should never be afraid to use them.

READ ABOUT DARK MATTER and EXOTIC CRAFT IN OUR SKIES

Derek Charette is now  a contributor to The Truth Denied @2014 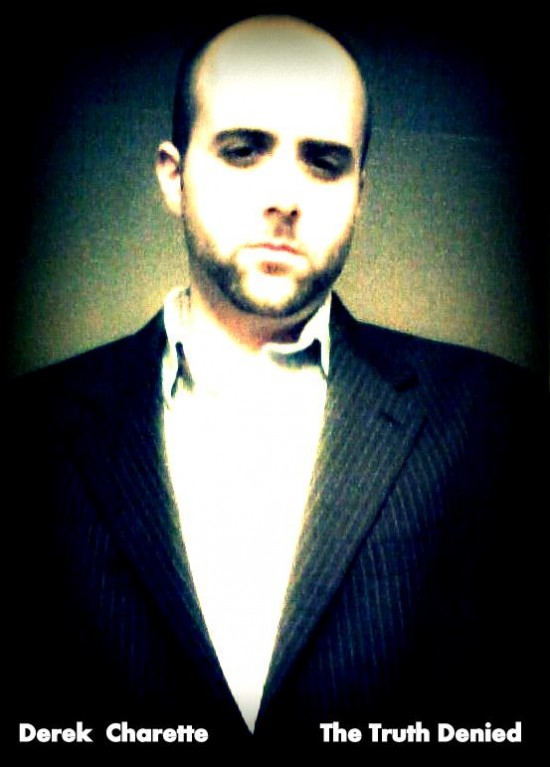 Derek has spent almost half of his life, 14 years in the restaurant business; from being an Executive level Chef, and even a personal chef for touring musical groups. Aside from his profession, he developed a passion at a young age that has driven him to spend thousands of hours gathering knowledge which could benefit the human race. “I can very clearly remember being in high school during the tragic events of 9/11. Within only a couple weeks, a friend of mine, who’s father is a doctor, enlightened us to the truth of what actually happened behind the attacks. A handful of us were going around school, telling people what we had learned, and tried sharing the truth with our peers and teachers. To my amazement, the vast majority wanted nothing to do with our so-called ‘conspiracy theories’. I knew right away, that something was seriously wrong when the majority of people still believed a multitude of lies, instead of the blatant truth. I knew that something unimaginable and terrible was taking place within the power structure of this country – and likely even througout the world. At 16 years old, I took it upon myself to find out what was actually taking place to cause so many people to be oblivious to truth. After 13 years of spending long hours and late nights digging through shrouded corners of the internet, I have been left with even more questions. My thirst for knowledge has put a strain on every aspect of my life, but I could never and would never concede in my efforts to expose the malevolence which oppresses almost every person on this planet.”