First, there was LBNE, then ELBNF, and now the world’s most ambitious neutrino experiment/collaboration has converged on a long-term identity the Deep Underground Neutrino Experiment (DUNE). Last week the collaboration voted to elect co-spokespeople and Mark Thomson (Cambridge) and Andre Rubia (Zurich) were elected. A great deal of work lies ahead for both the co-spokespeople and the collaboration as a whole as we move toward reviews and planning for a 40 kt liquid argon-based detector situated a mile underground.

The most recent  DUNE collaboration meeting took  place on September 5, 2015 at Fermilab. (See the report below).

Ordinary folks who actually toured the facility ( Fermilab) had this to say:

“What is Fermilab, you ask? This is a giant science lab, basically. They collide protons and blow stuff up.
They have a very nice tour system on Wednesdays, so I recommend you go to that. You get a nice walk around the place and through all the little hidey-holes.
They have a lot of ponds, which you can fish in, and a LOT of trails to walk on. They also have school programs to learn about biology and physics! There are many people waiting at the ready to bring you around the place.”  ~ Nicolle from Naperville, IL

“I fear that this place will cause our great demise one day.  Half the scientific experiments that go on here are barely understood by the average human (just visit their website to truly understand what their purpose is).  A lot of the things they take on seem to be ultra “top-secret.”

I was surprised to not find a website about Fermilab conspiracies…  Here’s what I’ve learned about them:
-They bought up all the land it sits upon, owning preexisting roads and leaving them with random dead ends in public and causing them to be abandoned within the property itself (Wilson and Batavia Streets for example).
-A herd of bison roam the lands to show tourists a piece of our true ‘Americana’.  Too bad you have to go out into the West to see bison now-a-days and Fermi auctions their share off every so often for thousands of dollars a ‘lo.
–They send what are called neutrinos through a neutrino beam 800 feet below the ground all the way up to Minnesota to study their speed and power.

Who knows what else they have up their sleeve but I can promise you that it’s all done with our tax money and causes some unknown illness to those that live nearby in West Chicago and Batavia. ”  Richie from Seattle, WA

The Deep Underground Neutrino Experiment (DUNE), formerly the Long Baseline Neutrino Experiment (LBNE) is a proposed neutrino detector at the Homestake Mine which would observe neutrinos produced at Fermilab. It would fire an intense beam of trillions of neutrinos from a production facility near Fermilab in Illinois over a distance of  810 miles to an instrumented multi-kiloton volume of liquid argon located at the Sanford Lab in South Dakota.  The proposed detector is to be about 12 metres (39 ft) across. Its goal would be to study neutrino  oscillation and perhaps determine whether neutrinos are their own anti-particle. Part of the path of the neutrinos would take them19 miles underground (the beam itself will start at 4,900 feet under the surface)

Funding and a changing of the guards in 2015

The US has committed $1 billion to its development, and the project will be end in 2022. In 2015, the Particle Physics Project Prioritization Panel (P5) collaborators elected a new name for the project called  Deep Underground Neutrino Experiment (DUNE) which is to be hosted by Fermilab.

Believe it or not, there is a non-exhaustive list of neutrino experiments, neutrino detectors, and neutrino telescopes.  Although all of the experiments are published , they are difficult to read  for the average person. In general, most readers still have no clue as to what science is looking into , and why.

In 2015, the US Department of Energy released documentation to encouraged other countries to invest in the project by promoting the importance of particle physics and energy consumption. Keep in mind that the US wishes to remain the global leader in these discoveries as well.

“The P5 report presents a strategy for the next decade and beyond that enables discovery and maintains our position as a global leader through specific investments by the Department of Energy’s Office of Science and the National Science Foundation Directorate for Mathematical and Physical Sciences.”

According to the document ” Strategic Plan for U.S. Particle Physics in the Global Context”  written by the “Particle Physics Project Prioritization Panel”  (aka “P5”), the US can no longer fund the project on it’s own, therefore a push for global investments are currently being pursued by the United States Energy Department.

“Particle physics is a highly successful, discovery-driven science. It explores the fundamental constituents of matter and energy, and it reveals the profound connections underlying everything we see, including the smallest and the largest structures in the Universe. Earlier investments have been rewarded with recent fundamental discoveries, and upcoming opportunities will push into new territory. Particle physics inspires young people to engage with science.

Particle  physics is global. To address the most pressing scientific questions and maintain its status as a global leader, the U.S. must both host a unique, world-class facility and be a partner on the highest priority facilities hosted elsewhere.

Choices are required. The updated strategy recommends investments in the best opportunities, chosen from a large number of excellent options, in order to have the biggest impact and make the most efficient use of resources over the coming decade.”

Now if I didn’t know any better, I would say that these discoveries somehow render free energy in the end, which will be patented and shelved.

Fermilab’s Alignment and Metrology Department maintain a high-precision control network throughout the laboratory complex. For the scanning process, a Leica ScanStation P20 ultra-high-speed 3D scanner was used in conjunction with special laser scanner targets, modified to fit within the existing control network points. Exact Metrology’s Leica ScanStation P20 was chosen for its combination of high accuracy and low scan noise, plus its industry-leading environmental specifications. (Its IP-54 enclosure is ideal for harsh industrial environments.)

The software chosen to aid the process was Leica Cyclone, producing equipment modeling and TruView—a web-enabled panoramic point viewer allowing the user to view, pan, zoom, measure, and mark up point-cloud data over the web. Additionally, RSL300 laser scanner target markers from Berntsen International Inc. were mounted concentric to 1.5-in. radius steel half spheres interfacing with Exact Metrology’s laser tracker nests. The coordinates of the control network, determined at the millimeter level, were provided to Exact Metrology to globally register all scans relative to Fermilab’s system. Thus, the end product provides information for all scanned objects in the common coordinate system used for the entire Fermilab site.” 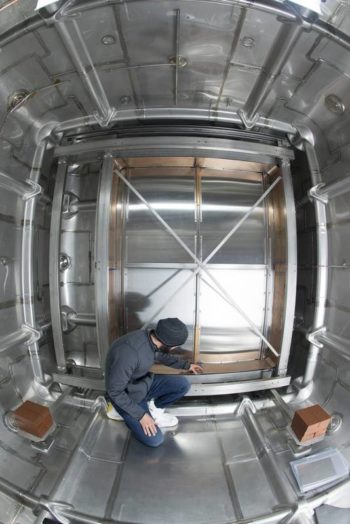 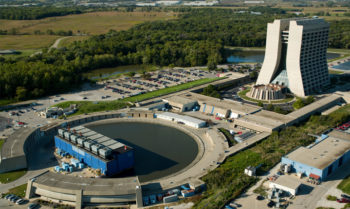 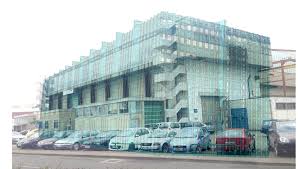 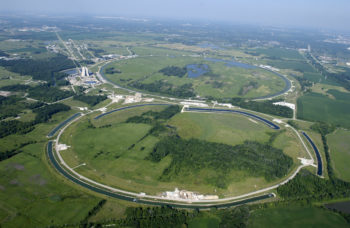