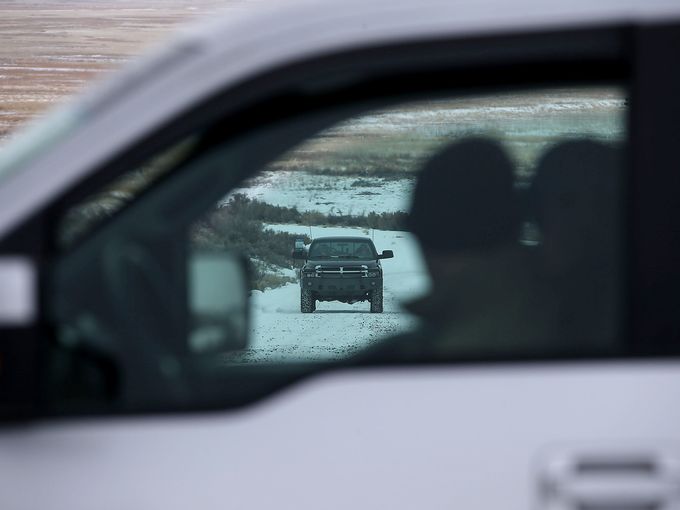 It is the duty of the patriot to protect its country from its government!” -“Thomas Paine

The issues and violations of “Constitutional Rights” are blurred in regards to the Oregon standoff.  After watching several interviews with Bundy (whether it be by phone with CNN or on camera filmed by the ‘militia” themselves) I see one convoluted story. Readers,  if you have been scouring  the net in an attempt to understand the so called “revolution”  regarding the Oregon  Occupiers story and have come up confused,  you are not alone.  The reporting by mainstream  news agencies is sketchy at best, and  inadequately providing the public with the history of both the Hammond’s and the Bundy’s, the infamous Ranchers. Delving into hundreds of reports and blogs doesn’t help, not much anyway. But I have managed to at least piece together some of the chronological history of events with the Bundy Ranch and the Hammond  testimony. This should guide you through the maze as well give you a feel for just how powerful our Federal government is, as well as a silenced media. Crickets.

It’s really not possible for me to say that a land grab is taking place in America by the BLM. Or is this a possible gun rights issue? I do know that ranchers are a pretty tough breed, usually with  decent morals, strong family ties and values. I  do know that  the Bundy’s have stood their ground in the past, but  I question if they have overlooked their own due diligence when it came to 20 years of unpaid  grazing fees, or did they have grazing rights to begin with ?   Did the Hammond’s required  “controlled burns” purposely get out of hand , and exactly what were the financial damages incurred, because I can’t seem to find any? Their stories are compelling, and as I listen to each and every interview by the Bundy’s and read their pleas  from their families to the American public, I can’t help but think “Man! The BLM is doing it’s damnedest to put these ranchers out of business”. -Roxy Lopez, The Truth Denied

Be sure to take our poll (see below).

The bottom line for the Occupants of the  Oregon standoff: ‘We will not back down’

The story is about the Hammond family and the  Bundy  family, both ranchers in Oregon. 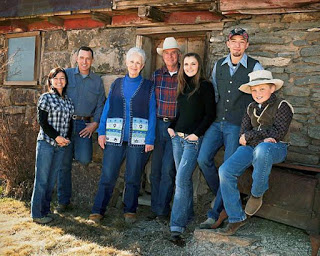 FACTS in the timeline re: Hammond’s 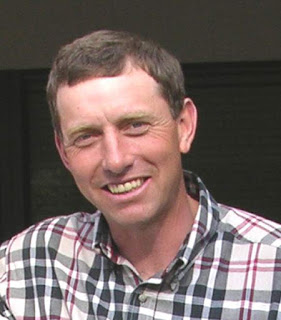 What were the initial charges?

Charges #1:  Accused the Hammonds of being  “Terrorists” under the Federal Anti terrorism Effective Death Penalty Act of 1996. ( This act carries a minimum sentence of five years in prison and a maximum sentence of death. #2 :Mug shots of the Hammond’s were posted throughout the town, and they labeled them both ARSONISTS.

In an effort to draw attention to a the arrests of  Oregon Ranchers (“Dwight Lincoln Hammond, Jr., 73, and his son, Steven Dwight Hammond, 46,) who are scheduled to begin five year prison sentences , the  three brothers from the Cliven  Bundy family and approximately 100-150 armed militia  have taken control of Malheur Wildlife Refuge Headquarters in the wildlife reserve.  They are prepared to stay there indefinitely. 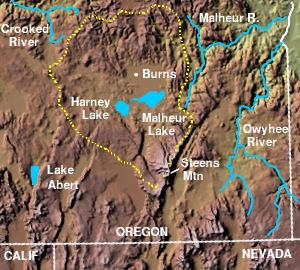 Malheur National Wildlife Refuge is a national wildlife refuge located roughly 30 miles (48 km) south of the city of Burns, Oregon. Administered by the United States Fish and Wildlife Service, the refuge area is roughly T shaped with the southernmost base at Frenchglen, the left top at Malheur Lake and the right top at Harney Lake. The refuge is a popular site for birding, fishing, hunting and hiking.

PRESS CONFERENCE with the “militia” group in Oregon.

“Ostensibly, this, too, is about a landlord-tenant dispute between a public-land rancher and the public land managers.” – AZ Central News

However, Ryan Bundy, one of the leaders of the armed militia occupying the Malheur Wildlife Refuge in Oregon, says locals support them.

But do the locals really support the Bundy’s?  According to the NY Daily News, Oregon residents no longer  feel comfortable with the threat of a militia type group of over 100 armed protesters in their  own backyard.  On the other hand there are thousands of  ranchers nationwide who can appreciate  Bundy’s and the Hammond’s standing up to the federal government in pusuit of  protecting private property rights for every American. 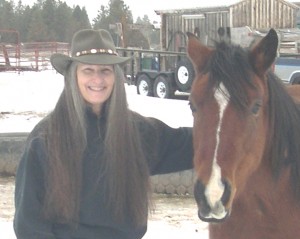 Barbara Peterson
Author, and owner of the website FARM WARS, the war on GMO’s

Oregonian  farmer and owner of  FARM WARS  Barbara Peterson has her own observations.

“This is open range out here. This means that if you want  critters off of your land, fence it in, not the other way around. Many ranchers have grazing rights that are being eroded by the BLM, and creating a backfire to stop a runaway fire is totally acceptable. Grazing rights are explained here: http://rangenet.org/directory/stern/thesis/chapter2.html. Ranchers have been historically using land that does not belong to them that no one else has been using, to run their cattle. Then the BLM steps in and  starts selling permits because the land is “Public Land.” Public Land is basically land that the government has taken for itself and controls supposedly “for the people.” The government makes money off of that land. As for the “for the people” part, that is highly debatable. A lot of support for the government’s stance comes from the water rights side, that states any use of the land other than tribal is illegal, and the government should take over the land for the indigenous people, which makes no sense at all. My take is that if land has been used for grazing for years and the government steps in to claim that land and charge a fee, that is wrong. Heritage rights should be respected. There is another agenda at work, and that is Agenda 21. The government, through the BLM is looking to grab as much control over land as possible. Whether or not the Bundys are willing or unwilling participants in a Hegelian Dialectic situation by taking over the station is yet to be seen. Way too much emphasis is place on “guns” and this just might play into the issue of gun control by the government. The timing is definitely suspect.”-  Barbara Peterson can be found on Facebook

However the  Harney County Sheriff  has a different view….

“You said you were here to help the citizens of Harney County. That help ended when a peaceful protest became an armed and unlawful protest…It’s time for you to leave our community, go home to your families, and end this peacefully,”  -Harney County Sheriff David Ward 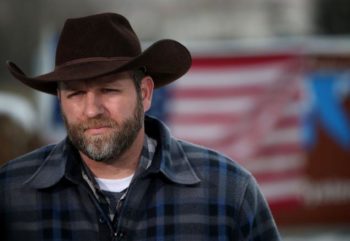 Note from the Bundy Family

Even GOP presidential hopeful Ted Cruz, one of big government’s biggest critics, said earlier that the gun-toting lawbreakers should “stand down peaceably.”

His call echoed Republican competitors Jeb Bush and Marco Rubio, who also said law and order should prevail. Other than these statements, not a peep from the politicos.

HISTORY of what the Government owns: 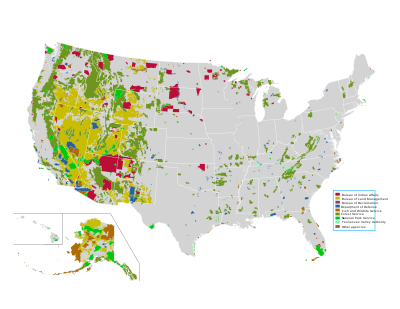 What  Oregon residents have to say!

“They are NOT militia and I’m sick and tired of hearing them called that! They are American Christian Terrorists. If they were Muslims doing the same thing, they’d be called terrorists.

Look up the definition of militia. A militia is created to protect our country from outside takeover, not to take over our own government. These people are traitors and cowards. A group of males (I won’t call them men) that steal at every chance they get.

Now they want land returned to them that was NEVER theirs to begin with. It belongs to the descendants of the original Americans. White men stole the land from them. So now these dimwits want to steal it back from those that stole it in the first place? I hope we throw them in prison and weld the door shut. They don’t deserve to be part of this great Nation!” 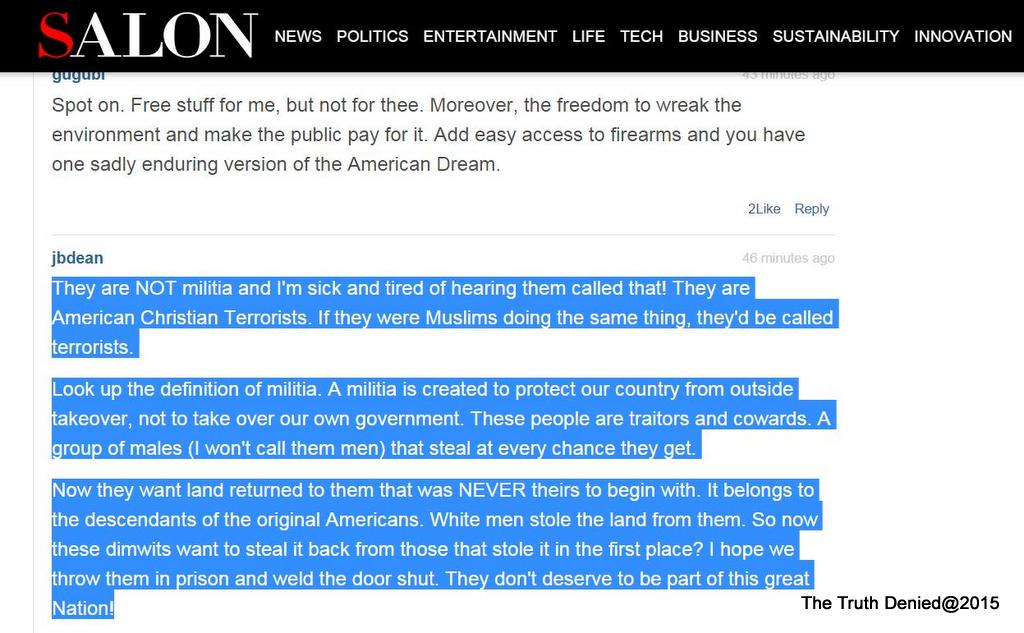 “interesting how a 14 year old with a home made clock is suspected as a “terrorist” but a bunch of white guys with guns taking over a federal building are not. “

As the story unfolds in Oregon State, you have to wonder o  Bundy is being set up by the BLM to confiscate private land or if Bundy is a true pravacteur as many believe. CNN reported on 1-5-15 that “Bundy borrowed $530,000 in 2010 for his company, Valet Fleet Service LLC, according to public records on usaspending.gov.  Valet Fleet Service is a truck maintenance company in Arizona.” 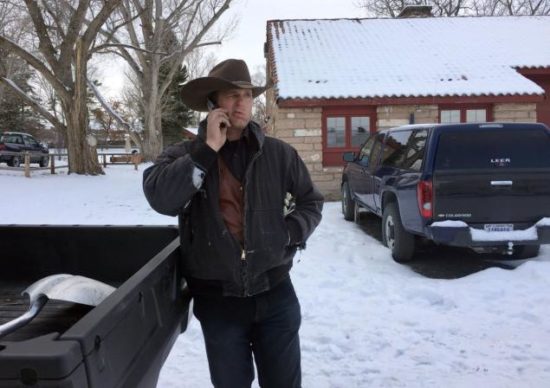 Ryan Bundy, 43, is leading with armed occupation of the Malheur Wildlife Refuge in Eastern Oregon with his brother, Ammon, and his father, Cliven. Photo credit Rev REBECCA BOONE/AP

Bundy went on to say: 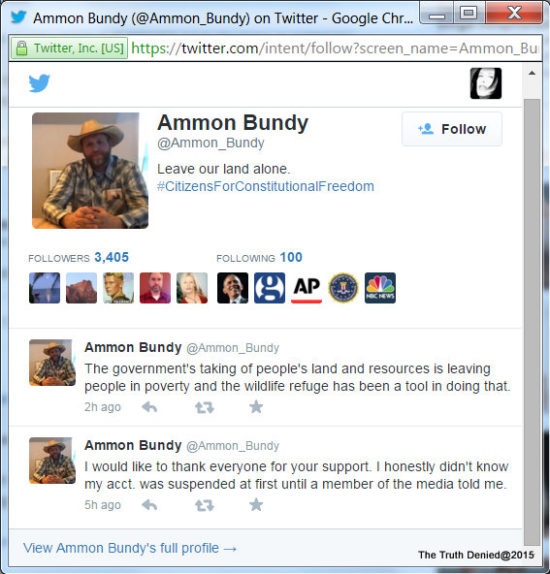 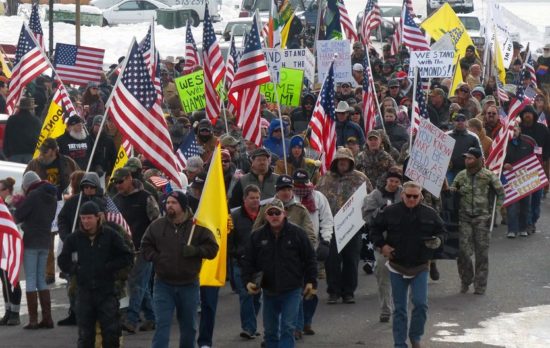 The occupation is just the latest armed political action taken by the Bundy family, a large Mormon ranching clan that has engaged in numerous land disputes with the federal government. Their family-owned ranch dates back to 1877 and currently manages up to 600 cattle. 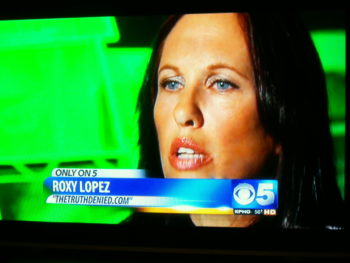 Roxy Lopez on CBS reporting on suspicious lines in the sky: Geoengineering Sub us on You Tube