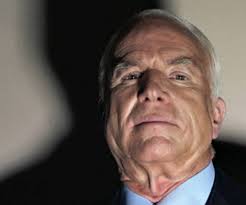 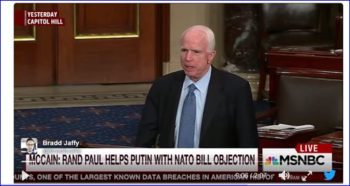 McCain and two Democrats—Ben Cardin of Maryland and Jeanne Shaheen of New Hampshire—demanded  the Senate vote with a unanimous consent to advance Montenegro’s bit to join NATO. McCain blasted the senate  floor  making clear that any colleague who would object to unanimous consent would be siding with Putin’s agenda.  McCain warned “You are achieving the objectives of  Vladimir Putin. He also insinuated that Paul was ‘ trying to dismember this small country  { referring to the country Montenegro} which has already been the subject an attempted coup.’ Sen. Rand Paul not only objected to the vote, but dismissed himself from the chamber. In return McCain explicitly called  Sen. Rand Paul “ an agent of a foreign power.”  McCain discredits any opponents by linking them to Vladimir Putin. 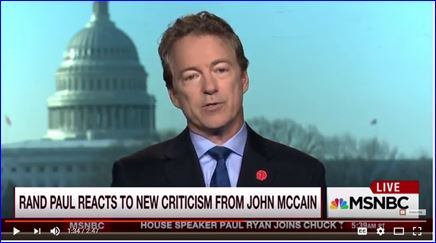 Paul said the U.S. military is already  “stretched thin”. He added, “We currently have … combat troops in about six nations. We have troops actively just stationed in probably a couple dozen others,” he said.

What mainstream is not  talking about.

Rand Paul had a reason for his objectives regarding this small but not so innocent country . In 2015 , Montenegro’s long-time President and Prime Minister Milo Đukanović  was named ‘Person of the Year in Organized Crime’. The extent of Đukanović’s corruption led to street demonstrations and calls for his removal. In October 2016, a coup that McCain was referring to was attempted by 20 people, including some Serbian and Russian nationalists; the coup was thwarted.

“As for Rand Paul, McCain knows that his objections to NATO enlargement are rooted in the Kentucky senator’s libertarian-inflected understanding of America’s national interest. On Thursday, Paul released a statement explaining his vote in terms that are abundantly familiar to friends and critics alike: “Currently, the United States has troops in dozens of countries and is actively fighting in Iraq, Syria, Libya, and Yemen (with the occasional drone strike in Pakistan). In addition, the United States is pledged to defend twenty-eight countries in NATO. It is unwise to expand the monetary and military obligations of the United States given the burden of our $20 trillion debt.”

Watch John McCain on the Senate floor as he mouths the  narrative “The Senator from Kentucky is now working for Vladimir Putin”.

What  would be the interest in Montenegro?

You guessed it, money to contribute to NATO;money to fight wars as well a strategic location in the proximity of Russia.

In 2003, it was reported that two oil flows, Russian and Caspian, were to meet in the Balkans in the early 21st century. Sent in circumvention of the Turkish straits, the flows require new pipelines that will take them either to potential consumer markets in EU countries or to deep-water ports in the Adriatic Sea. That explains the regional boom of pipeline projects and the intense fight for local corporate assets waged by Russian and Western companies.

So what does this have to do with adding the country of Montenegro to NATO? *Stay tuned for further updates.*

Roxy Lopez of The Truth Denied News & Chemtrails Kill Org. Advocate for WE THE PEOPLE. Be sure to sub TTD YouTube Channel today!

Senator Rand Paul responds to McCain after he called him a traitor and working for Putin on the house floor. Rand Paul calls him unhinged and past his prime and a warmonger. https://www.youtube.com/channel/UCqAs7roHhjw2zSTHLD-vXJA