“Let’s face it! Donald Trump is a rough individual but he loves America more than any other president in my lifetime! He is the last firewall between us and the cesspool called  Washington. ”       – Actor James Woods

What was the show about?

In the past two days, I have done back to back interviews regarding President Donald Trump. Below you will find two of the interviews with public advocate and  host, Sallie Elkordy .  Sallie Elkordy Radio Shows on RBN

Note that Sallie states “I would listen to this interview with Roxy Lopez touting Trumps achievements to the end when we get a mystery caller. NOTE when he calls in and when hangs up. Count how many times he says, “Right?”

Listen to the show as there are hundreds of Trump’s accomplishments, too many to list! 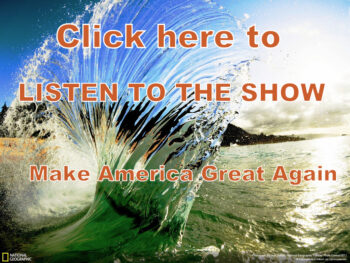 Trump has repeatedly followed up on his pledge to donate his presidential salary. The following list documents what government projects or departments have been chosen to benefit from Trump’s quarterly paychecks so far: