Why is it bad for sulfur dioxide to linger in the atmosphere? 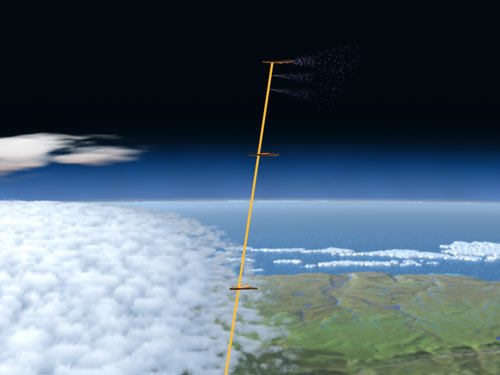 In our Previous article  we explained  how sulfur dioxide can linger in the skies for a very long time.  This article will explain why we need to correct this problem right away, or else we will be in some real trouble. Why?

Volcanic Sulfur Aerosols Affect Climate and the Earth’s Ozone Layer
“In contrast to these explosive eruptions, one of the most severe volcano-related climate effects in historical times was associated with a largely nonexplosive eruption that produced very little ash–the 1783 eruption of Laki crater-row in Iceland. The eruption lasted 8-9 months and extruded about 12.3 km3 of basaltic lava over an area of 565 km2. A bluish haze of sulfur aerosols all over Iceland destroyed most summer crops in the country; the crop failure led to the loss of 75% of all livestock and the deaths of 24% of the population (H. Sigurdsson, 1982). The bluish haze drifted east across Europe during the 1783-1784 winter, which was unusually severe.

The most significant impacts from large explosive eruptions come from the conversion of sulfur dioxide (SO2) to sulfuric acid (H2SO4), which condenses rapidly in the stratosphere to form fine sulfate aerosols. The aerosols increase the reflection of radiation from the Sun back into space and thus cool the Earth’s lower atmosphere or troposphere; however, they also absorb heat radiated up from the Earth, thereby warming the stratosphere.

The article above explains why people are reporting dying trees all over the world, and the cause may very well be the lingering particle. The culprit is sulfur aerosol, and our skies have reached saturation. 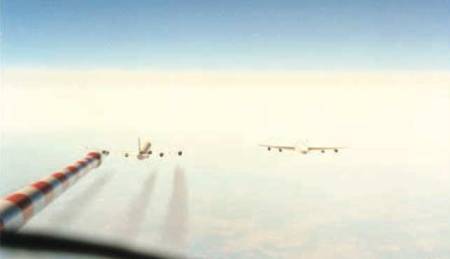 Have  you ever seen a photo of two jet planes side by side, and  one of the planes  is producing a longer trail than the other?  This is caused by different amounts sulfur content.

Contrails: What’s Left Behind Is Bad News
“Tests were performed with a NASA jet aircraft examining the effect of sulfur levels in jet fuel exhaust. During the airborne test one engine was run on normal jet fuel and the other engine was run on fuel that emitted exhaust with a lower sulfur content. The high sulfur engine, representing most jet engines on modern commercial aircraft, produced a contrail that lasted through a larger range of temperatures and formed faster out of the engine. The low sulfur engine did the opposite.”

Influence of fuel sulfur on the composition of aircraft exhaust plumes: The experiments SULFUR 1–7
“The observations demonstrated that fuel sulfur emissions do cause measurable and even visible changes in the particle properties and contrails. At ambient temperatures 5 K cooler than the threshold temperature for contrail onset, the plume was visible already about 10 m behind the engine exit for high FSC, but 15 m behind the engine exit for low FSC (see Figure 1c). During descent through the level of contrail onset the high sulfur contrail remained visible at slightly lower altitude (25 to 50 m) or higher temperature (0.2 to 0.4 K). The higher FSC caused a larger optical thickness of the contrail shortly after onset. The high FSC contrail grew more quickly but also evaporated earlier than the low FSC contrail.”

This table show how sulfur influence the temperature: 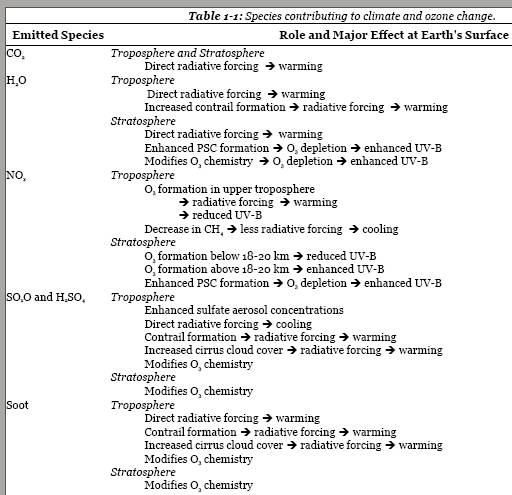 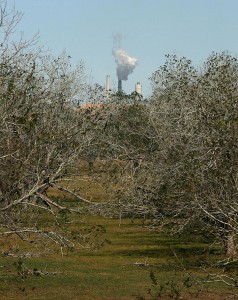 Reduction of sulphur limits in aviation fuel standards (SULPHUR)
“There was a correlation between particle number concentration and fuel sulphur levels and the number of ice particles in young contrails increases with increasing fuel sulphur concentration. The reason for this is that sulphate particulate matter provides a greater number of nuclei for condensation of water.
Notwithstanding potential errors in measurement techniques, colour differences were noted in contrails with two different fuel sulphur levels which again is a function of particulate number concentration”

Climate-Saving Sunshade Would Screw up Climate-Saving Solar Facilities
“Researchers from the National Oceanic and Atmospheric Administration went back and examined data from 1991, when Mount Pinatubo erupted. The Philippine volcano ejected about 15 million metric tons of sulfur-dioxide–laden dust into the air, cooling the planet’s average temperature by about 0.6°C for nearly 2 years [ScienceNOW Daily News]. The researchers found that the eruption also reduced peak power output at a California solar-thermal plant by 20 percent. Solar thermal plants use arrays of mirrors to concentrate sunlight and turn it into a heat source for a conventional power plant; they are generally cheaper than traditional photovoltaic systems.

Lead author Daniel Murphy explains that particles in the stratosphere reduce the amount and change the nature of the sunlight that strikes the Earth. Though a fraction of the incoming sunlight bounces back to space (the cooling effect), a much larger amount becomes diffuse, or scattered, light. On average, for every watt of sunlight the particles reflect away from the Earth, another three watts of direct sunlight are converted to diffuse sunlight [Photonics Online]. While that switch to diffuse sunlight has little impact on the photovoltaic systems, it seriously interferes with solar-thermal systems. “The sensitivity of concentrating solar systems to stratospheric particles may seem surprising,” said Murphy. “But because these systems use only direct sunlight, increasing stratospheric particles has a disproportionately large effect on them” [The Register].”

‘Sunshade’ for global warming could cause drought
“To study the effects that sulphur sunshades might have on rainfall, Trenberth and Dai looked at trends in precipitation and continental run-off from 1950 to 2004 to try to detect the impact of the eruptions of Mount Agung in Indonesia 1963, El Chichón in Mexico in 1982, and Pinatubo in 1991. The researchers had to account for the effects of El Niño, which tends to decrease rain over land, and increase it over the oceans. After this, a marked decrease in rainfall and run-off in the year after the Pinatubo eruption was clear (see graph, right).

Dai and Trenberth say their results suggest that artificially putting large amounts of sulphate particles into the atmosphere in order to decrease solar radiation could have catastrophic effects on the planet’s water cycle. “Creating a risk of widespread drought and reduced freshwater resources does not seem like an appropriate fix,” they say.”

Please also read this article about the warming effect of trails and clouds that formed because of trails:
Global warming: blaming the basic thing being living, ignoring the more visible one

This is the last of my food 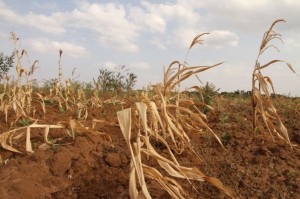 Above Photo: “Nothing left: “This is the last of my food. Green grams (pulses) and a few beans. I used to grow these myself but there has been no rainfall in eight years, so now I have to buy all food from the market. The prices keep going up. We only have enough food for one meal a day now, and that goes for all people in this area,” says Lucia Muvili Ngotho from Kalimbui village in Mwingi, north east Kenya.ACT/NCA/Laurie MacGregor”

The documents prove that visible contrails contain sulfur, known as air pollution. The longer the atmosphere remains saturated with sulfur, the worse the pollution will get annually.

This article bellow suggest that there is an effort to reduce sulfur content, that we are not yet see the implementation.
Removing sulfur from jet fuel cools climate: study
December 14, 2011 A Yale study examining the impact of aviation on climate change found that removing sulfur from jet fuel cools the atmosphere. The study was published in the October 22 issue of Geophysical Research Letters.

Particles of sulfate, formed by burning sulfur-laden jet fuel, act like tiny mirrors that scatter solar radiation back into space. When sulfur is removed from the fuel, warming occurs but it’s offset by the cooling effect of nitrate that forms from nitrogen oxides in jet exhaust. The result is that desulfurization of jet fuel has a small, net cooling effect. In 2006 the United States introduced an ultralow sulfur standard for highway diesel, and the Federal Aviation Administration (FAA) is interested in desulfurized jet fuel for its potential to improve air quality around airports. Aircraft exhaust particles lodge in the lungs and cause respiratory and cardiovascular illness. In 2006 there were more than 31 million flights across the globe, according to an FAA emissions inventory.

“It’s a win-win situation, because the sulfate can be taken out of the fuel to improve air quality around airports and, at the same time, it’s not going to have a detrimental impact on global warming,” she said. Unger also ran a simulation of aviation emissions at the Earth’s surface and found that the climate impact is four times greater because the emissions occur at altitude in the upper atmosphere. “The chemical production of ozone is greater in the upper troposphere and its radiative efficiency is greater,” she said. “It’s a stronger greenhouse gas when it’s higher up in the troposphere, which is exactly where aviation is making it.”

On 2 September 1998, residents of Nottingham experienced unusually high levels of sulphur dioxide. A study investigated health impacts by comparing hospital admissions in Nottingham with those in Leicester (a neighbouring town unaffected by the episode) during the week before and the week after the air pollution episode. Comparisons were also made with the same two weeks in previous years. A general increase in hospital admissions occurred during the episode week, with a significant increase in respiratory admissions, particularly asthma. However, mortality rates did not vary substantially. This publication helped establish that it is feasible to use routinely collected hospital data to investigate the adverse health effects of an air pollution incident. A similar approach may therefore be employed to determine the effects of future air pollution episodes.

The Iceland volcano article proves that a sulfur haze can kill crops. If this continues to go unchecked, we will continue to  experience a loss of crops globally. Visible contrails in our skies is proof sulfur aerosol. Call them what you wish, contrails or chemtrails it does not matter, both are signs of sulphur pollution, both must be stopped.

3 thoughts on “Why is it bad for sulfur dioxide to linger in the atmosphere?”