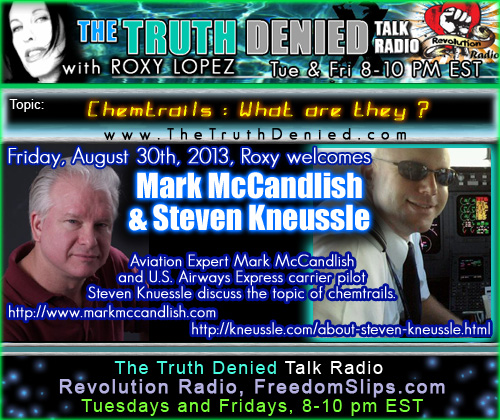 Mark McCandlish gives expert testimony regarding the chemtrails. He believes that chemtrails may be responsible for  environmental  damages occurring on the planet today, including soil and air contamination via  aerial distribution of  several  toxic metals into the atmosphere. McCandlish has proof that these are  not  persistent contrails and that we should pay attention.

Our second guest, commercial pilot Mr. Steven Kneussle discusses in detail as to  why he  believes that chemtrail claims  are clearly unsubstantiated. Knuessle has looked at many reports and states that commercial airlines are simply “not involved in any such scheme.” However, Knuessle  agreed that Agenda 21 is a concern, as well expressed his he his efforts  towards saving the environment from further contamination.

Together McCandlish and Knuessle exchange ideas, perspectives, and facts regarding persistent contrails, chemtrails and weather modification.

Having grown up as a military dependent, Mark McCandlish manifested an interest in aircraft and other modes of transportation from an early age. This interest was augmented by an artistic and mechanical ability that initially grew out of an interest in dinosaurs, fossils and science.

As a teenager, this interest ‘shifted’ to cars, (no pun intended) and Mark decided that he wanted to become a designer for General Motors. He soon discovered that attending one of the premier automotive design curriculums offered at Art Center College of Design in Pasadena, California was not going to be possible on the minimum wage of the early 1970’s. So, he headed off to join the U.S. Air Force, and take advantage of the G.I. Bill, eventually passing through electronics school at Lowery AFB in Denver, Colorado. Then on to his permanent duty station, McChord AFB in Tacoma, Washington.

While at McChord AFB, he performed repairs on and bore-sighted the infrared and radar-based MA-1 and ASQ-25 weapons control systems of the F-106 Delta Dart with the 318th Fighter Interceptor Squadron.

Steven is currently employed as a commercial airline Captain for a U.S. Airways Express carrier. Steven was born in Lockport NY and moved with his family to Tuscaloosa Alabama when he was 12 years old. He attended Tuscaloosa Academy and Northside High School. During this time, Steven was inducted into the National Honor Society, Forerunners (a division of Leadership Tuscaloosa), and received numerous awards for his performance in academics, art, literature, and sports. Steven attended the Alabama Fire College and was certified as an Firefighter/ EMT Intermediate. He worked at Carroll’s Creek Fire District for four years and was awarded the Good Samaritan Award for his service to the community. During this time, Steven also worked for the Red Cross as a CPR/First Aid Iinstructor. Kneussle continued working for the Red Cross as a Disaster Relief Responder and has been deployed to several major disasters in the Southeast.

As a veteran of the U.S. Navy, Steven gave six years of honorable service to our country, doing his part to secure our freedom and liberty. Kneusle was accepted into the prestigious Naval Nuclear Propulsion program and worked to maintain and operate a nuclear propulsion plant aboard the USS Pasadena, a fast attack submarine. After receiving an Honorable Discharge from the U.S. Navy, Steven pursued a career in aviation and attended Embry Riddle Aeronautical University, Delta Connection Academy and Regional Airline Academy. While at Regional Airline Academy, Steven was selected as Assistant Chief Pilot of the Airline Transition Program. In this position, Steven was tasked with creating course curriculum and taught commercial airline pilots aviation weather, Advanced Jet systems, Aviation Regulations, Instrument Flying skills, Aviation Health and Advanced Aerodynamics.

Protecting the Civil Rights of the people has also been a passion of Steven’s. He has served as State Coordinator for the Liberty Coalition, State Leader for the United Civil Rights Councils of America, Tuscaloosa County President of the Alabama Family Rights Association, Vice-Chairman of the Constitution Party of Alabama, and was a lead organizer for the 2010 Tuscaloosa TEA Party. In 2010, Steven ran as the Constitution Party’s candidate for Alabama House District 62. Recently, Steven helped found the Alabama Independence Party and is currently seeking ballot access to run for Alabama State Senate in 2014.