St.Louis PD has barricaded the Bank of America building and is refusing customer access to their own personal  deposits. As we all know, Bank of America announced last week that they would begin to  charge all of it’s customers a $5 monthly fee for all debit cardholders. For some , this was the last straw for the customers who have already experienced personal tragedies associated with B of A such as closed credit card lines and foreclosed homes.

‘They would not let me get past that barricade, where those three guys are. I talked to the liutenant of the St. Louis Police Department – and he said they [customers?] don’t have a legal right – but he was going to try to work out something, a symbolic gesture where eight people to pull out their money, I being one of them.’

He came back later and said they [BofA] will not go along with that. You will have to withdraw your money online.’

Note that the Bank of America web site has been intermittently in and out of service for the last 72 hours, making it difficult, if not impossible for customers to access their accounts. 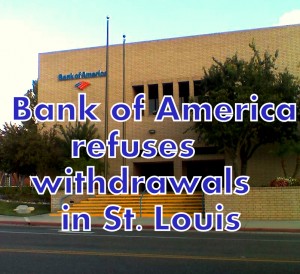 What can the public legally do?  We note that reports advise us that it is a felony to “cause a run on the banks”. That noted, you have every right to take your money elsewhere, most are moving there money to Local  Credit Unions.

*The Truth Denied simply reports the stories as we see them.  We have no suggestions other than to  please consider moving your money elsewhere carefully. Make your own decisions based on your own personal financial needs. We are not here to make these choices for you. Do your homework. *

Bank Of America & several other big banks reverse $5 fee Tuesday due to protesters.