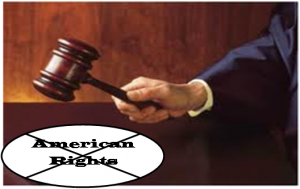 Here’s the latest on the Senate’s section of this Act that gives the military power to detain “suspected” Americans for any amount of time they choose and without a trial:

Well, as of Dec 12th, members of the House and Senate (within the Armed Services) Committees settled their versions of the 2012 National Defense Authorization Act. The bill now includes numerous provisions for the National Guard’s transition; giving a more specific responsibility of addressing matters in homeland defense and civil support missions to the Chief of the National Guard Bureau on the Joint Chiefs of Staff; bringing back of the three star level to the Vice Chief of the National Guard Bureau position; authorizing of certain activities of the State Partnership Program-which is a National Guard program that interacts with a single country or region in support of US Government policies; a comprehensive report requirement on the military air movement and delivery of personnel and equipment, including both Title 10 and Title 32 requirements; and a modification of  the Military Reserve call-up authority to allow up to 60,000 members ordered to active duty other than during times of war or national emergency.

Regardless of these adjustments, the bill still contains language that allows Americans to be detained without trial at a detention center anywhere in the world. It STILL mandates military detention for anyone they suspect is a terrorist. NO court hearing, NO “Due Process” and NO “Habeas Corpus”. They “claim” this is necessary for more flexibility in prosecuting the war on terror!

“The House and Senate will take a final vote on the bill this week before sending it to the President for signature!”

Contact Congress immediately at 202-224-3121 and urge them to vote NO on the NDAA Conference Report!  Your representatives and senators need to hear from you as soon as possible, please contact them by email as well as by phone!!!

Keep a watchful eye on this here: The National Guard Bureau Legislative Liaison

Some of the specific wording of the JOINT EXPLANATORY STATEMENT from late last night:

“The Senate amendment contained a provision (sec. 1036) that would require the Secretary of Defense to establish procedures for determining the status of persons captured in the course of hostilities authorized by the Authorization for Use of Military Force (Public Law 107-40), including access to a military judge and a military lawyer for an enemy belligerent who will be held in long-term detention.

The House recedes with an amendment clarifying that the Secretary of Defense is not required to apply the procedures for long-term detention in the case of a person for whom habeas corpus review is available in federal court. Because this provision is prospective, the Secretary of Defense is authorized to determine the extent, if any, to which such procedures will be applied to detainees for whom status determinations have already been made prior to the date of the enactment of this Act.

The conferees expect that the procedures issued by the Secretary of Defense will define what constitutes long-term detention for the purposes of subsection (b). The conferees understand that under current Department of Defense practice in Afghanistan, a detainee goes before a Detention Review Board for a status determination 60 days after capture, and again 6 months after that. The Department of Defense has considered extending the period of time before a second review is required. The conferees expect that the procedures required by subsection (b) would not be triggered by the first review, but could be triggered by the second review, in the discretion of the Secretary.

The House bill contained a provision (sec. 1036) that would require the Secretary of Defense to establish a process to review the detention of each individual detained at Guantanamo.

The Senate amendment contained a provision (sec. 1035) that would require the Secretary to submit to Congress a report on procedures for implementing the periodic review process required by Executive Order No. 13567 for such detainees.

The House recedes with an amendment that would clarify that the periodic review process applies to any individual who is detained as an unprivileged enemy belligerent at Guantanamo at any time on or after the date of enactment of this Act.

The conferees understand that the review process established by the Executive Order is not a legal proceeding and does not create any discovery rights in the detainee, his personal representative, or private counsel. For this reason, the conferees expect the procedures established under this section to provide that: (1) the compilation of information for the review process should be conducted in good faith, but does not create any rights on behalf of the detainee; (2) the mitigating information to be provided to the detainee is 160 information compiled in the course of this good faith compilation effort; (3) the decision whether to permit the calling of witnesses and the presentation of statements by persons other than the detainee is discretionary, and not a matter of right; and (4) access to classified information on the part of private counsel is subject to national security constraints, clearance requirements, and the availability of resources to review and clear relevant information. Procedures for status determinations (sec. 1024)”

IF YOU PREFER NOT TO CONTACT YOUR REPRESENTATIVES OR SENATORS, SIGN THIS PETITION! Stop NDAA Section 1031 Citizen Imprisonment Law today

I just  left Sen. John Kyle this message a few moments ago. I said, “Senator Kyle, please consider the endangerment to civilians regarding the National Defense Authorization Act and it’s glaring provisions where so the MILITARY is now given the right to detain an American Citizen without just cause or warrant. I  also said “This is a dangerous and slippery slope for the innocent citizens at large in our country. I beg of you to vote this Act down, as it is UNJUST, tyranical, and a complete violation of our freedoms and constitutional rights!”