President Barack Obama signs defense bill on December 31, 2011 despite all the  ‘reservations’ .

What seems to be most concerning is that  days prior  to the signing of the final bill,  President Barack  Obama  had  pledged to the American people that he would actually veto the National Defense Authorization Act.  New Years day he did the opposite and signed the bill putting it into law…so what gives?

If you check a few websites out, you will see great concerns from those who are in the know, and believe me, many groups have  tried to STOP this bill from  being signed.

The AP has a great story , read it here:

HONOLULU (AP) — President Barack Obama signed a wide-ranging defense bill into law Saturday despite having “serious reservations” about provisions that regulate the detention, interrogation and prosecution of suspected terrorists.

The ACLU released a statement today that read :

“President Obama’s action today is a blight on his legacy because he will forever be known as the president who signed indefinite detention without charge or trial into law,” said Anthony D. Romero, ACLU executive director. “The statute is particularly dangerous because it has no temporal or geographic limitations, and can be used by this and future presidents to militarily detain people captured far from any battlefield.  The ACLU will fight worldwide detention authority wherever we can, be it in court, in Congress, or internationally.” 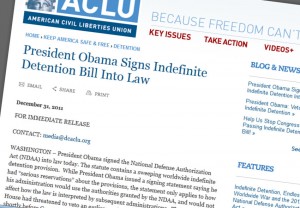 And of course Alex Jones is surprised as well, actually he is shocked.

Look for a few more stories over the next few days!  We will keep you updated, but in the meantime, please pass this on to your family and friends; keep your loved ones informed.

There over 800 prison camps in the United States, all fully operational and ready to receive prisoners. They are all staffed and even surrounded by full-time guards, but they are all empty. These camps are to be operated by FEMA (Federal Emergency Management Agency) should Martial Law need to be implemented in the United States and all it would take is a presidential signature on a proclamation and the attorney general’s signature on a warrant to which a list of names is attached. Ask yourself if you really want to be on Ashcroft’s list.

The Rex 84 Program was established on the reasoning that if a “mass exodus” of illegal aliens crossed the Mexican/US border, they would be quickly rounded up and detained in detention centers by FEMA. Rex 84 allowed many military bases to be closed down and to be turned into prisons.

Operation Cable Splicer and Garden Plot are the two sub programs which will be implemented once the Rex 84 program is initiated for its proper purpose. Garden Plot is the program to control the population. Cable Splicer is the program for an orderly takeover of the state and local governments by the federal government. FEMA is the executive arm of the coming police state and thus will head up all operations. The Presidential Executive Orders already listed on the Federal Register also are part of the legal framework for this operation.

The camps all have railroad facilities as well as roads leading to and from the detention facilities. Many also have an airport nearby. The majority of the camps can house a population of 20,000 prisoners. Currently, the largest of these facilities is just outside of Fairbanks, Alaska. The Alaskan facility is a massive mental health facility and can hold approximately 2 million people.

Now let’s review the justification for any actions taken…

Executive Orders associated with FEMA that would suspend the Constitution and the Bill of Rights. These Executive Orders have been on record for nearly 30 years and could be enacted by the stroke of a Presidential pen:

allows the government to take over all modes of transportation and control of highways and seaports.

allows the government to seize and control the communication media.

allows the government to take over all electrical power, gas, petroleum, fuels and minerals.

allows the government to seize all means of transportation, including personal cars, trucks or vehicles of any kind and total control over all highways, seaports, and waterways.

allows the government to take over all food resources and farms.

allows the government to mobilize civilians into work brigades under government supervision.

allows the government to take over all health, education and welfare functions.

designates the Postmaster General to operate a national registration of all persons.

EXECUTIVE ORDER 11003 allows the government to take over all airports and aircraft, including commercial aircraft.

allows the government to take over railroads, inland waterways and public storage facilities.

specifies the responsibility of the Office of Emergency Planning and gives authorization to put all Executive Orders into effect in times of increased international tensions and economic or financial crisis.

grants authority to the Department of Justice to enforce the plans set out in Executive Orders, to institute industrial support, to establish judicial and legislative liaison, to control all aliens, to operate penal and correctional institutions, and to advise and assist the President.

allows the Federal Emergency Preparedness Agency to develop plans to establish control over the mechanisms of production and distribution, of energy sources, wages, salaries, credit and the flow of money in U.S. financial institution in any undefined national emergency. It also provides that when a state of emergency is declared by the President, Congress cannot review the action for six months. The Federal Emergency Management Agency has broad powers in every aspect of the nation. General Frank Salzedo, chief of FEMA’s Civil Security Division stated in a 1983 conference that he saw FEMA’s role as a “new frontier in the protection of individual and governmental leaders from assassination, and of civil and military installations from sabotage and/or attack, as well as prevention of dissident groups from gaining access to U.S. opinion, or a global audience in times of crisis.” FEMA’s powers were consolidated by President Carter to incorporate the…

Allows for the strategic relocation of industries, services, government and other essential economic activities, and to rationalize the requirements…