Occupy Oakland (Occupy Oakland’s Site) Protestors had major clash with police who threw tear gas and stun/flash grenades towards the protestors on Saturday (It always seems to be a Saturday with the most arrests, doesn’t it?) At least 300 people were arrested. Also, some protesters claimed that rubber bullets were also fired. This doesn’t look like our America?! It looks like a freakin war zone! Why are these cops taking these extreme actions against the protestors?! Is it the mayor who has allowed this?

Well…The Oakland Mayor stated that she “ran out of patience a long time ago,” and “We’re tired of some people — and, again, it’s a faction of the Occupy movement — using Oakland as their playground.” Not very nice, Quan!!!! She has also been known to say that she wants to make the protesters more compliant by any means necessary! Moreover, just a month ago, a report was submitted to a federal judge that included “serious concerns” about the department’s handling of the Occupy protests, and the police department received heavy criticism for using excessive force against the protestors.

On the other hand, as I was researching this, I did wonder for a moment if any of the protestors did actually do damage as Quan had claimed. There are some “bad eggs” in every crowd, right? Then I came across a witness’ first-hand experience, who stated, “I realized they were effectively treating the peaceful march as a riot. There was not rioting, or intentions to riot, just dancing, optimism, hope, and walking. But clearly the police thought differently, and I knew they would try to trap us again without warning. From the moment I saw riot police running towards are marching from both directions, I knew the constitution would not apply in Oakland tonight.”

And as far as damage, this is what the person witnessed and stated, “Someone burned an American Flag in front of city hall. I’ve seen the same guy do it before; frankly he’s weird and it’s kind of his thing…One thing to note is that the police arrested the wrong part of the protest. Most people arrested were young peaceful types. Aggressive protesters, and anyone with a record, are usually very good at avoiding arrest. Point being, back at the plaza opportunists began their work. I saw some young ‘jugalos’ spray-painting a wall with “jugalos for life” sh*t and then take photos next to it. They were just young and stupid kids; some good protesters cleaned it up later in the night.”

And she further stated “Tonight I saw something much scarier, that I’ve never seen before. First, I saw that the police have printed profile books of protesters. I saw a cop flipping through pictures with descriptions, talking about who on their list they’ve seen today. When resting in Oscar Grant Plaza, a cop was filming the plaza from a rooftop in an adjacent building. They’re always filming, some have cameras on their bodies now, but this was clear spying and sophisticated intelligence gathering and analysis. Second, a very large tank on wheels, with a water cannon on top, rolled on scene. Someone said it was called a ‘grizzly’, but I can’t find a photo anywhere. Help? It was massive, and I stood right next to it before they brought it behind police lines. It was a hardcore, modern urban tank. The police are funded and prepared to use a water cannon on protesters, if need be. Know that.” 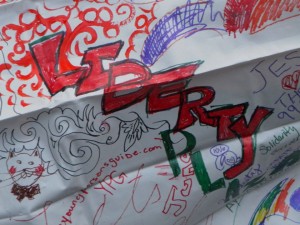 See the raw footage by RT

One thought on “Excessive Oppression Used Against Oakland Occupiers”