In an Oct. 25, 2007 file photo a Predator drone UAVarrived at a  U.S. Customs Border Patrol mission from Fort Huachuca in Arizona. The (FHA)  Federal Aviation Administration was asked to issue flying rights for a range of  “pilotless”  planes to carry out civilian and law-enforcement functions but has been hesitant to act for safety reasons.

Surprisingly enough, a North Dakota court has upheld the use of  an (UAV) unmanned drone  to assist in the arrest of an American citizen. District Judge Joel Medd wrote that “there was no improper use of an unmanned aerial vehicle” and that the drone “appears to have had no bearing on these charges being contested here,” according to the documents.”http://www.usnews.com/news/articles/2012/08/02/court-upholds-domestic-drone-use-in-arrest-of-american-citizen

“The Seattle Police Department’s drone doesn’t look like much of a threat in person. In fact, it looks like a toy.

In a warehouse where police vehicles are stored, Officer Reuben Omelanchuk on Friday demonstrated how the unmanned aerial vehicle hovers and flies.

“It’s very fun,” said Omelanchuk, who is one of department’s two officers trained to fly the vehicles. “But doing it safely can be stressful at times.”

The 3.5 pound Draganflyer X6 Helicopter Tech cost $41,000 and is operated with a handheld controller and two joysticks. It has cameras that take still pictures, videos and infrared shots that can be viewed live, but it has a battery life of less than 10 minutes.” http://seattletimes.com/html/localnews/2018090173_drones28m.html

According to the Seattle police Department the drones do have their limitations, at least for the moment.

“It can’t carry anything that weighs more than 35 ounces,  and it also can’t be flown around people or over crowds.”  ~Seattle Police Department

“The FAA has set strict guidelines for the use of drones in law enforcement, according to Lt. Greg Sackman, who runs the Police Department’s Arson/Bomb Squad and oversees the unmanned-vehicle program.FAA requirements state drones must be flown below 400 feet and remain within eyesight of an operator as well as an observer at all times.Further, for safety reasons, police cannot fly drones over an area with people, according to the FAA. In addition, Sackman said, the Police Department has drafted policies to prevent unauthorized, inappropriate or illegal use of the drones.” Seattle Times Report

DHS wants to use spy drones domestically for ‘public safety’ shocks everyone that read the article.

“Sec. Napolitano weighed in on the topic of unmanned aerial vehicles during this week’s Committee on Homeland Security and suggested that implementing UAVs for domestic surveillance could the next step in the United States’ amazingly accelerating drone program.

The Federal Aviation Administration is currently considering ground rules that will outline how the FAA can govern domestic drone use, and by 2020 they expect to see 30,000 UAVs soaring through US airspace. Speaking before a House panel on Wednesday, though, Sec. Napolitano suggested that deploying UAVs proactively to put an extra set over locales nowhere near America’s border may in fact be the next move.”  rt.com 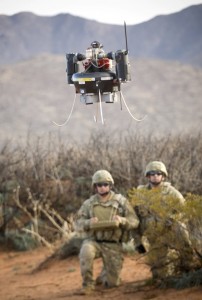 Military Drone At about a foot in diameter and 11kg/ 25 pounds fully fueled, the RQ-16 T-Hawk is noticeably bulkier than mini-UAVs like the RQ-11 Raven. The ducted fan air MAV (Micro Air Vehicle)/ T-Hawk flies like a helicopter, using a specially designed fan enclosed in a duct that is driven by a a 3 KW/4 hp 3W-56 56cc Bower Twin piston gasoline engine. The fan draws air in through the top of the duct and expels it out the bottom to provide thrust.

“The USA’s Future Combat Systems Class I UAV is intended for reconnaissance, security and target acquisition operations in nearly all terrain, including urban environments. Each system of 2 vertical take-off and landing air vehicles, a dismounted control device, and associated ground support equipment. They can be carried by selected platforms and dismounted soldiers, and possess autonomous flight, navigation, and recovery.

The larger Class II and Class III UAV development programs were canceled in favor of existing options: the RQ-7 Shadow, and MQ-1C SkyWarrior. The planned Class IV MQ-8B Fire Scout was canceled by the Army in 2009, though it will see naval use. Despite excellent field reports for mini-UAV competitors like the RQ-11 Raven, however, Honeywell’s hovering RQ-16 “T-Hawk” initially avoided the axe, found a niche, and made the list for the US Army’s earlyincrement 1 Brigade Combat Team Modernization fielding. It has even seen limited exports – but the Class I program has been canceled.”   Read more here : http://www.defenseindustrydaily.com/one-small-step-for-a-uav-one-big-step-for-fcs-class-i-01372/#mav

On Jan 3/08, the US DSCA announced [PDF] the United Kingdom’s official request for:

A connection elf – satellites – haarp – aerosols from FreeLeaks
“The US has two separate ‘squadron’ of armed drones – one run by the US Air Force and one run by the CIA. “
I am guessing the CIA is in charge of  surveillance spying, and the Airforce would be in charge of combat ( killing). 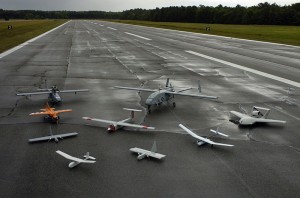 “Using drones, the USAF Air Force has increased the number of combat air patrols it can fly by 600 percent over the past six years; indeed at any time there are at least 36 American armed UAVS over Afghanistan and Iraq. It plans to increase this number to 50 by 2011. CIA Director Leon Panetta has recently said that drones are “the only game in town.” The CIA have been using drones in Pakistan and other countries to assassinate “terrorist leaders.” While this programme was initiated by the Bush Administration, it has increased under Obama and there have been 41 known drone strikes in Pakistan since Obama became President. Analysis by an American think tank The Brookings Institution on drone attacks in Pakistan has shown that for every militant leader killed, 10 civilians also have died. “http://dronewarsuk.wordpress.com/aboutdrone/
And what about those palm sized drones that Britain has taken on, ever seen one of these?
It fits in the palm of a hand could become a potent new weapon for the forces in the fight against the Taliban. Devised by Cardiff-based BCB International and Middlesex University’s Autonomous Systems Laboratory, the SQ-4 Recon is being examined by the US military.The ‘nanodrone’ contains two cameras which allow soldiers to look over hills and inside enemy bunkers without the risk of being killed or injured, the Daily Mail reported. It can be operated remotely.
The Truth Denied will be having more experts on our radio show to testify to the fact that the U.S.  citizens have their days numbered as to just how long freedom of privacy will last, and I do believe that after 9/11, we simply have given up every privacy right that we ever had in this country. Drones are just one aspect of  our military and their ability to spy on us.
Here is one from the public, photographed in Boston:
Drones War UK Reports: : ” The UN’s Special Rapporteur on extrajudicial, summary or arbitrary executions,
Philip Alston, said the following concerning statement:
“The use of drones is not combat as much as targeted killing”.
He has repeatedly tried to get the US to explain how they justifies the use of drones to target and kill individuals under international law. The US has so far refused to do so.
Concerned yet?  I am more than just concerned! I am damned right ready to fight back, enough is enough!
What about you?
Please follow and like us: